Adventures in Beekeeping: The First Swarm

Do you know what is the worst? Starting off blog posts. I’ve been doing this shit for ten years (eleven? It may be eleven years at this point, I don’t even know…) and I still spend an inordinate amount of time starting and re-starting posts because there is just no way to fully capture in words what it’s like to be in the middle of an awesome day– getting things done, spreading a full cubic yard of mulch in your garden– and then it’s like someone pulled the emergency-stop on your entire body, bringing all of the singing and mulching and getting shit done to an abrupt halt because of the buzzing.

You might be asking, “what buzzing?” And so was I. But it was more like .03 seconds of what the fuck is this buzzing?! And then I realized real quick that some shit was going down with one of my bee hives.

Let’s just start here. Some shit went down with one of my bee hives.

Basically after a day of “running errands” which, on the farm, includes filling up the truck with a dozen bales of straw… 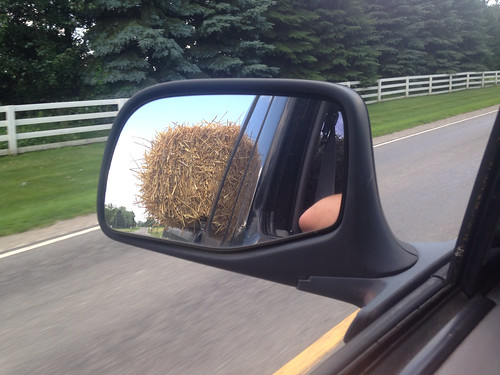 And then filling it back up with mulch… 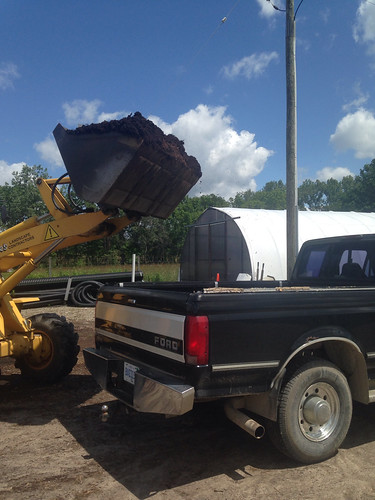 I was just getting in to my groove shoveling and spreading mulch when about twenty yards away from me, this happened…

It doesn’t even capture it.

Thirty-thousand swarming bees make this incredible sound that basically reverberates down to your very soul.

It’s insane. And I caught this swarm mid-well.. swarm.

So the point at which I heard the swarm was right when all those little shits were taking off for some location that was not on this farm. It was amazing.

I followed a cloud of bees about 50 yards down the street behind my neighbors house and into the woods before I lost them. And then I just stood there listlessly for a good five minutes because apparently that was that… a quarter of my bees just up and left two months after they arrived at the farm.

Now, swarming bees aren’t necessarily good or bad (which basically means everyone has a different damn opinion about this and I can’t tell which is which) BUT it’s a natural part of bees doing what bees do, and I didn’t “lose” a hive… presumably I’ve got a fair compliment of workers and a new queen about to hatch.

If those bees didn’t swarm, however, they’d be spending all of their energy making honey instead of going rogue out into the woods. Now that hive is going to be spending a lot of time bolstering its numbers instead of making food IF they successfully hatch a new queen.

All the things I read about bees told me they’d be spending so much time drawing out and filling the comb in the brood boxes that I’d probably only get one super of honey per hive this year. Well. They’ve already made pretty good progress on that, and, apparently, because they’ve been well fed with sugar syrup (abundance of food) AND we’ve had a couple of very rainy weeks that have kept all the bees in the hive (crowding) on the first really nice non-windy day they were like, hey, we’re getting crowded in here, and there is obviously a ton of food to go around so WE’RE OUT.

There’s so much chance at play here. If I’d known what a crowded hive looked like I might have added new boxes to them last week which might have avoided the “crowding.” Or, if I hadn’t been outside at that particular time I might never have known that hive swarmed. If it hadn’t been raining for weeks, they may not have felt overcrowded. If I hadn’t been feeding them weekly jars of sugar-syrup, they may not have felt secure enough in their food production to swarm…

The truth is, I’m on track to produce 40+ pounds of honey this year. I haven’t eaten 40 pounds of honey collectively in my entire life… so I’m not really worried about honey production so much as I am about learning to read my hives.

Bees are fascinating little creatures, and I’m learning to appreciate them more every day.

PrevPreviousShit That Happens on a Farm
NextWhen Things Come TogetherNext