Doing The Hard Thing: A Partnership and Masonry Story

After three and a half years together, MysteryMan and I have fallen into our respective roles in this relationship… which is to say one of us runs around flailing their arms over their head and shouting “no possible way!” and the other of us attempts to restore a general level of insanity wherein the combination of a house addition, construction of a barn, living in a gas station, and a 1500 mile road trip with two donkeys in the back of a pickup all seems like a good idea.

Okay. That is an exaggeration. MysteryMan neither runs nor flails. In fact, his most common response to my ideas is an even more profound depth of silence (he’s not a mystery for no reason.) And also demolition.

That’s right people, he deals with my insanity by rolling his eyes and tearing more shit off the house. And everyone said it wouldn’t last…

I deal with his belief that “we” can’t do a thing by becoming even more determined to do whatever it is I’ve set my mind to. Usually. Any by “usually” I mean “every single time in my life… until Tuesday.”

I am not a person who gives up. Ever. But here’s a real, authentic story for you whereing I look a concrete block in the face and give. the. hell. up.

MysteryMan has been 97% in charge of putting the foundation in for the addition, because this is what he does for a job. The 3% that I was supposed to contribute came in the form of these… That is a hole…that used to be a window…outside of a basement…that will soon be a porch. Which basically means the damn thing needs to be blocked up before we can finish backfilling.

We overlooked that small detail last weekend, and as we’re trying to finish backfilling, um, now, it was imperative that the windows get blocked up immediately. And I was eager to jump in and contribute my 3%.

“No problem,” I said. “I’ve got this.” Because four years ago I built a two-course high wall for my patio out of stone, so I must be a mason, right? Right? Don’t I look like a mason to you? That picture should give you an idea of where in the hell this is going. Who builds a wall barefoot?

Back to my story. So I was attempting to lay concrete block, which I’ve never actually done before, in a small window hole four feet off the ground, after my Actual Real Job, but before the sun set. Which is to say in the two hours between 7-9 PM. And I prepped my mortar, spread a little on the sill, slung my block up…. and the two words I can use to most aptly describe that experience are:

It was awkward, I couldn’t level it, I was losing daylight, and this was the one job I was supposed to do so MysteryMan didn’t have to worry about it.

And that’s when I had to look him dead in the eye and say: fuck it.

Then my shoulders slumped, my head went down, and those four little words came out of my mouth, “I can’t do this.”

It’s not like I never say “can’t.” In fact, I use it often. For example, “I can’t stop eating peanut M&M’s.” “I can’t deal with stupid people.” “YOU CAN’T MAKE ME.” But when it comes to projects around the house, we don’t use the “c” word. I will go to excruciating lengths, to prove that I absolutely can put a piece of nine-foot drywall onto a rack without help thankyouverymuch.

But here I was, utterly defeated.

And all of the sudden I thought, we are fricking insane. Not insane in a good way, but like, just absolutely off our rockers. We aren’t going to be able to do any of this, and we’re going to run out of money and end up with a big moat around the house instead of an addition, and THE WORLD IS GOING TO END.

In retrospect, perhaps I was being a little dramatic after 10 minutes of trying to place a single concrete block, but there you have it.

And do you know what MysteryMan did?

He didn’t say “I told you so”, or rub my face in it. He didn’t argue with me either.

Bless his flannel-wearing heart, when we got back to the other house he dug up my old renovation book, marked the chapter on masonry, and casually left it on the coffee table while I sat on the couch glaring at the universe. 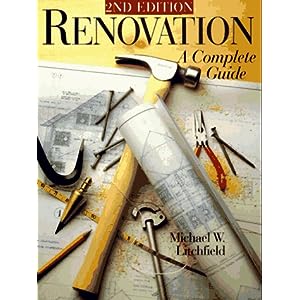 And when I told him the next day I was calling an actual real mason to come take care of the windows, he mentioned that he’d put a bunch of masonry tools over by the patio and the blocks were up there just in case I wanted to give it another try…

Which I did NOT want to do, by the way. But since he went to the trouble to get all my tools together, and clean up the block… Was I really going to give up that easy? I mixed a significantly better batch of mortar which is what was giving me fits in the first place. (Thanks to a little reading up I did in a certain book.) And then I went for broke… And listen, this is not the prettiest masonry job anyone has ever done. There are some definite leveling issues that come from working in an itty bitty space on an already crooked basement wall. But… Turns out maybe I can do a little bit of mason work after all.

I wouldn’t exactly say we’ve got “compatible” temperaments when it comes to building a house together, and we’re not always great partners. But I’m grateful that he’s the kind of guy who would be that little voice that says “yes you can” the one time I couldn’t be that for myself.