You know I never shy away from a tiling challenge, so I jumped in hammer first when it came to building the walk-in shower for our new master bathroom. MysteryMan only balked for a minute or two, because hey– his man-cave bathroom turned out fairly awesome– and you can’t argue with results.

I’ve been picking the collective brain of our plumbers, the internet, and anyone who seems mildly interested in how to build a shower bench, and I’d call the rough framing portion of this project a success. Here’s how it went down.

This is possibly the most uninteresting image I’ve posted to this website in the last four years, but it shows what our plan was. 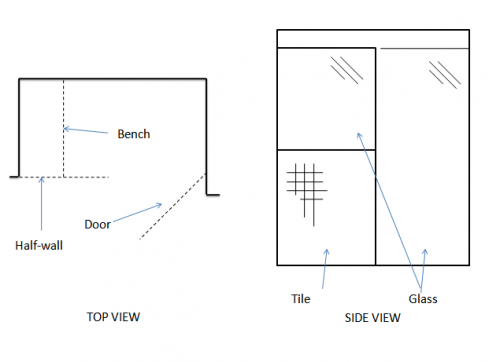 This is what we started out with: We taped the wall off first to help us visualize. Then it was time to get out a couple of saws and the framing nailer. To start, because the half wall would only be attached at the floor and on one side, I cut a hole through the subfloor to attach a “post” to the floor joists below. This gave the wall some added stability. These are two 2×4’s sunk about 8″ into the floor and nailed to the joist. I built the frame of the wall to fit around these. The spacing of the one stud is 12″ off the back of the wall. Traditionally you’d make this 16″, however we decided to put a bench 12″ off of the back of the shower so it made sense to put the stud in this position for nailing. See? Framing in the shower bench consisted of building one itty-bitty wall and then nailing a 2×4 into the back of the shower wall to support the plywood top. In order to get everything attached correctly, there was a lot of blocking added to the existing walls. For the bench, blocking was added here… For the half-wall, blocking was added here… It’s not pretty, but it works. (I’m pretty sure that’s a metaphor for how I look most days.)

To finish everything off, we added 6″ pieces of blocking around the bottom of the shower, and around the bench. Rubber will be attached to this to waterproof everything. The bench also got 3/4″ plywood attached to the top… And to the front. I have plans to finish this with tile on the front, and a slab of granite or marble on the top.

To finish everything off, we put a 4.5″ sill in, and nailed it into the post for the half wall as well, adding additional support. So, not bad for a little weekend work… Up next is the rough plumbing, then waterproofing and getting the backerboard on for tile.