I cannot even begin to tell you how may door installations at our house have ended with one of us trying to dislodge the others eyeball with a shim. Luckily, in most cases said door is between us, which minimizes the amount of time we actually spend in the emergency room.

Ok, and maybe once I gave MysteryMan the “what-for” (as my grandpa calls it) while shouting across the front lawn and carrying a pickaxe, but on the flip side this dude sometimes tells me I’m going to hurt myself using the sledgehammer/axe/hand-saw just to see if he can get my head to physically rocket off my shoulders and into the lower atmosphere.

These are the joys of building a house together. 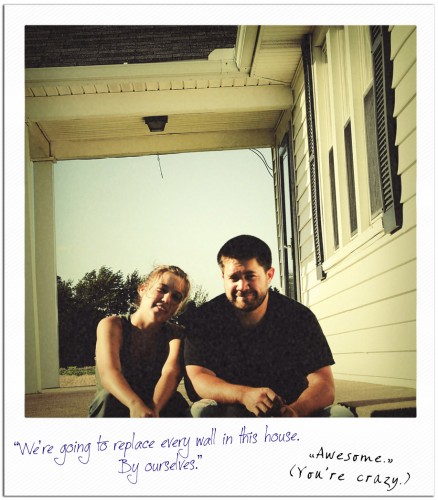 A fellow houseblogger recently wrote about keeping it real about home renovation projects:

Renovating a home is hard, the cheerful ease I see on the home reno blogs that I follow can’t be constant, and I need to cease comparing our project to others. We can’t be alone. Other folks have fights. Other folks have a hard time making decisions together that satisfy both partners needs/desires. Other folks are broke sometimes. Perhaps by laying it out here, our normal can be a comfort to you, if you’ve got a project.

I wholeheartedly agree. If even one couple gets through a renovation with all the smileys and exclamation points we see on the internet, I’d be shocked.

But this is the Internet and so I’d guess most of us are cautious about what we say. We gloss over the tears, the pickaxe wielding rages, the shredded design magazines, and that time our significant other coshed us over the head with the building plans.

And in the interest of keeping it real, I’ll tell you all this: not one part of our project has been completed with anything that could be described as “cheerful ease.” We consider it a successful day if we hover in a constant state of snarkiness that doesn’t degenerate into outright animosity. Or attempted murder. 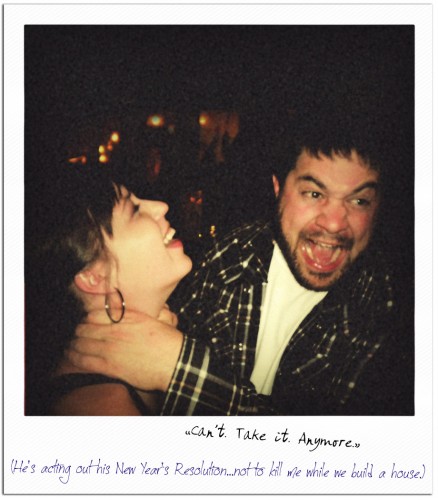 Here are a few of the hard truths I’ve learned about renovating or building a house with your significant other.

Truth #1: Everyone has their strengths. (Which are sometimes annoying as hell.) 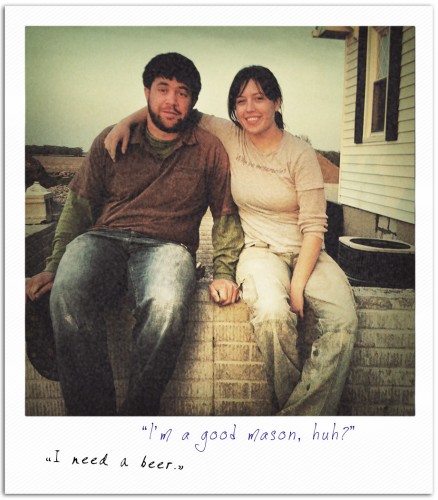 Maybe you don’t know this about me, but I once rigged a chain up to a tractor with a screwdriver and zip-tie to pull out some fenceposts. I build things on the fly, which is to say I sketch up rough plans, get the first piece set, and then measure from there.

Maybe you don’t know this about Mystery Man, but he’s an engineer. An Actual Professional one. He once drew plans for and pre-fabbed an entire donkey barn in our garage, then took it outside and nailed it all together. And it was square.

My strengths are jumping in and getting things moving. I can see how the thing will look at the end of it, and while I know there will be obstacles, I also know there’s nothing I can’t overcome (or figure a way around with some zip-ties). MysteryMan, on the other hand, has patience and a way of figuring out and planning for every possible contingency. There’s never any “oh shit, we forgot to leave space for this, or cut a hole for that” with that man.

And when you get down to the nitty-gritty those things usually translate into “Good god woman, could you finish one project before you start three more?!” and “Can’t?! We can’t do that? I’ll give you can’t right after I give you a concussion with this hammer.”

Both of us being rather uncommunicative and mostly exhausted all of the time means that we don’t often step back, look at what the other has done, and give them a pat on the back for it. I think the lesson in this for us has been: It’s totally okay to harp on each other about our differences, as long as we praise each other for our strengths in equal measure.

Here’s the thing. Everyone talks about “loving each other through good and bad, thick and thin” and blah, blah, blah. No one said anything about tearing your entire life upside-down and re-drywalling it.

Listen, we’re both very smart, strong, capable people on our own, but– I’m just going to say this thing because it’s true– we’re not exactly a great team. I mean, we do have our “stronger together” moments (I’ll always be grateful for this one in particular), but for the most part our work-styles are, ah, less than compatible for a project of this size.

We’re too much alike in wanting to think through the projects, but we never end up with the same plan. So one of us is usually left holding the little side of the tape measure, while the other one gets to have all the fun. 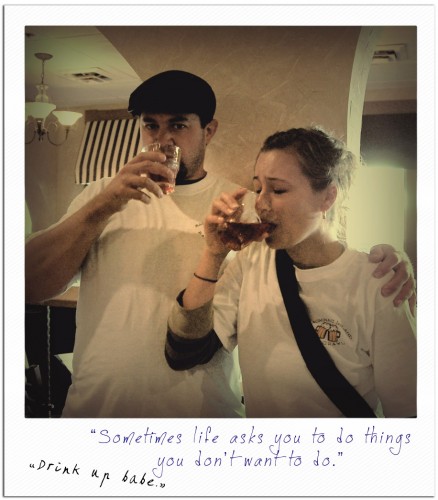 And sometimes, sometimes, I’ve thought –and okay, shouted while wielding a particularly large pickaxe– that it would just be easier to build this house alone. Just as MysteryMan has considered tying me up and locking me in the basement for the next 6 months so I can’t start any new projects until this one is done.

But then who would tile the bathroom???

The point is, separately there are a lot of parts of a project of any scale that would be easier to do alone. No one to compromise with on wall colors, no one to tell you you can’t have a disposal in the kitchen sink, no one to keep stealing your tools and leaving them strewn about the house along with her 562 ongoing projects. But… but, there’d be no one to help you with the heavy lifting, or to call the lumber yard and yell at them for you, or to discuss the mysteries of brick ovens with.

That’s the point we come back to when the tools stop flying and the red haze clears from our vision: You drive me crazy, but I couldn’t do it without you. Probably.

Truth #3: The grass is only greener over there because it’s well fertilized. (Read: Bullshit.) 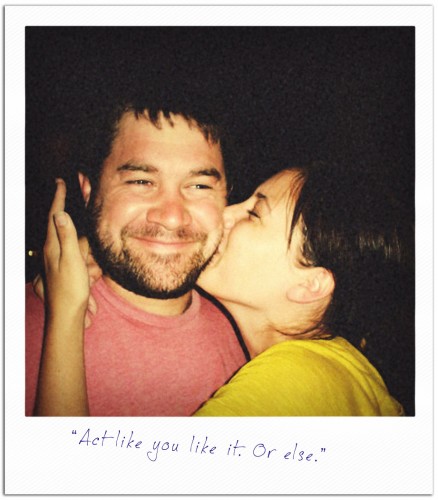 I’ll admit to sometimes looking at the way other people’s projects go and comparing ours to theirs. The projects that are all “look, we turned our spare room into a beach cottage with $23 and stuff we found in the attic” and I’m just trying not to trip over the cats, computer cords, and laundry, much less turn our place into a room to envy.

Or, so-and-so are having so much fun working on their reno together and we have to have to work on separate parts of the house to stay sane!

Life– particularly when tearing your house apart– is not a fairy tale, romance novel, or story from someone else’s website.  It’s not easy. And sometimes it’s not fun. But it is what it is– you get into it, you learn to work with the person you’ve chosen to be part of your life, and sometimes you have to dodge a screwdriver or two, just to keep things interesting.

As far as I can tell, that’s the real truth about doing it together.