I took two days off from my Actual Real Job to work on the window trim and siding on the house, which actually ended up being 112 trips up and down a ladder– seventy of which were doing things that I thought I paid other people to do.

For those of you who’ve been around this site since March, you know that I had my little heart set on framing in the addition ourselves, but that time, sense, and MysteryMan got the better of me and we ended up paying a framing crew to knock out the first part of the build in a few weeks. Let me restate that: We ended up paying a framing crew almost $10,000 (not materials, just labor) that was supposed to go to flooring and appliances… things we decided to hold off on purchasing because we thought having professionals do the first part of the build was going to save us headaches down the road.

And while I don’t have one bad thing to say about the framing of the house (except for that part where the old joists and new joists don’t line up in the basement so we can’t run ductwork down there to the master bedroom), I definitely did not get my money’s worth when it comes to the window installation done by the professionals. I’ve never installed windows before, but they were level, they opened, and they seemed securely in place, so hey, I had no complaints. But before we went and slapped some trim and siding on the house, I did my due-diligence and read the window installation manual. 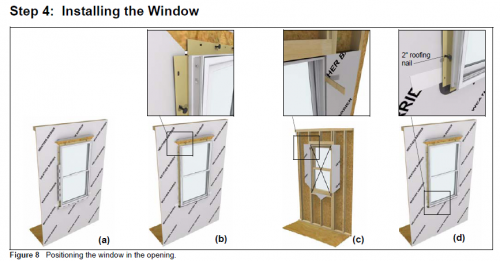 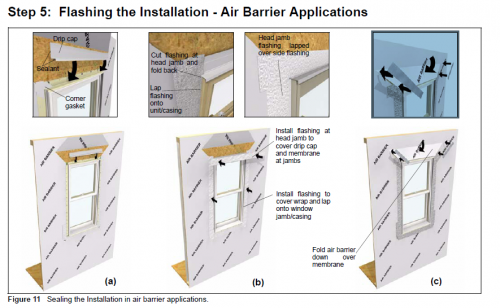 So, what we’ve learned is….

And here’s where my life started to get complicated.

First I noticed this…

Some of the corner pieces look “a little weird” as in, like half of them are missing… In my hunt for corner pieces, I find some “corner piece instructions” which specifically say that these must be caulked at the seams. (See my horrible caulk job above. My excuse is that I was on an unsteady ladder. Ahem.) None of the corners have been caulked by the people that installed the windows. Result? 28 trips up and down the ladder.

As I’m caulking, I also notice this…

Six of my 14 windows have been installed so that the top flap of house wrap is nailed behind the window. The part that’s supposed to go over the flashing at the top to prevent water leaking down the backside of the window. So this is awesome, and another 15 trips up the ladder, pulling out staples and cutting new pieces of house wrap for the top. So my day that was supposed to be spent putting on window trim, was actually a fun-filled 8 hours of caulking, taping, and hauling myself up and down the ladder almost thirty more times to put tape over the nailing fin.

And here’s the thing, I don’t expect people to go over and above without getting paid for it. But I do expect some very basic things:

So when I saw this, my head basically rocketed off my shoulders and spun around in the lower atmosphere. Here’s a game called “what’s wrong with this window”. It’s kind of like photo hunt. Do you see something different between these two? Flashing! Hidden underneath the house wrap for some reason.

I mean, first of all, it’s one thing if you don’t know what you’re doing, but there are two windows here, side-by-side, that are clearly done differently. Common sense would tell you one of them has to be wrong. Right? Am I just talking crazy here?

Also, if you just stop for a minute to consider the point of flashing, which is to direct any water running down the inside of the window away from the house, I think it makes a lot of sense that you’d want that on the outside of your housewrap. Instead of directing moisture right down your sheathing and into the basement.

I just don’t know what goes through people’s heads. “Clearly we did one of these windows wrong, but I guess we’ll just leave it like that… maybe the homeowner won’t notice.”

I read articles all the time that are all about “projects you need to get professional help for” and “why you shouldn’t DIY”,  but here’s the thing, I can read the installation manual as well as anyone. And if I hadn’t done that, or hadn’t been personally trimming out these windows, I might never have noticed that they were improperly installed. And three years from now I’d be wondering why every time we get a sprinkle I’ve got waterfalls pouring in from my windows.

Moral: Just because you hire someone to do the work, doesn’t mean you should slack on doing your research about proper installation techniques.