Almost Half Way (To Hell?)

I can’t really accurately describe the blissful days of hanging siding that the weekend consisted of if I don’t tell you a little bit about the week of hell that I survived, which went a little like this…

Tuesday my Actual Real Job shuttled all of its employees a half-hour away for a full day meeting. Which, my typical work day is mostly meetings anyway, but you all know what my week is like, I have every minute of my day that isn’t devoted to working at my job earmarked for something pertaining to getting my house built– including lunch hours and starting immediately after I leave work.

Monday, for example, I sped home and did the Clark Kent phonebooth quick-change into my work gear, so that I could spend the last hour of daylight doing this: 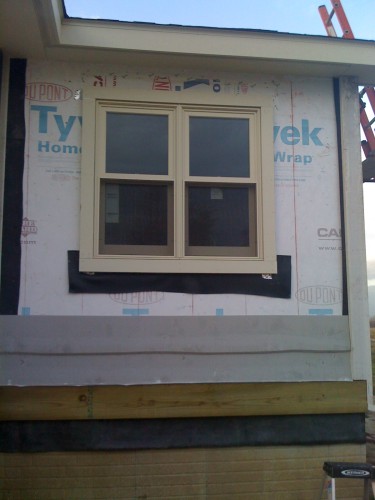 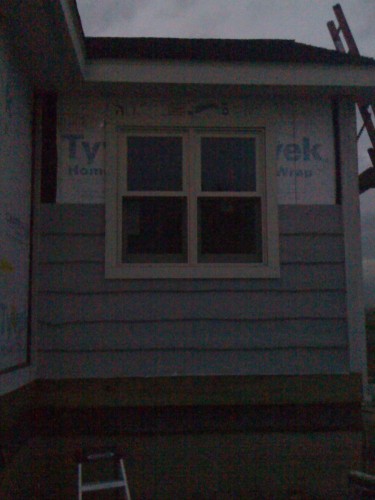 What I wouldn’t give for light-til-10-PM summer nights still.

So you can see how an all-day meeting that takes away my lunch hour, adds drive time, and runs past my normal working day could throw my schedule into a tizzy. (Is tizzy the right word to describe “effing disaster?” Maybe I need a new thesaurus.)

That meant that MysteryMan and I were up until all hours of the night framing in the bump-out for the living room fireplace, which was scheduled to be installed Wednesday morning. And two thumbs up for the guy from Fireside Hearth & Home who showed up exactly at 9:00 AM on Wednesday. And dealt with that little spacing issue MysteryMan and I created with our late night framing and lack of looking at the fireplace specs. The fancy grate isn’t on it yet, but I have high hopes that we made the right decision with the self-contained glass-fronted unit that vents out the rear wall instead of the roof.

Just after I let the fireplace installation guy in Wednesday I left for Shaumburg, IL — if one of Dante’s circles of hell was a place made entirely of boulevards with no legal U-turns, it would be Shaumburg, IL. I executed more illegal driving maneuvers in 24 hours in that city than I have in the last 15 years of my life. And I got to work on a video shoot in a mall until 4:00 AM. You know, I don’t really like malls all that much. Or video shoots. Or 4:00 AM. It’s a bit like I imagine purgatory would be, and luckily the video crew are some awesome dudes to be stuck with if you’re going to be in hell until the wee hours of the morning.

And speaking of hell, after that long night housekeeping busted into my room at 8:00 AM, and then two hours later when I officially “woke up” and turned on the shower, I set the smoke alarms off. Shockingly, the four hour drive home took me six hours. I love Chicago, but I have never been so glad to leave a city in my life. Except for that entire week I was in China. (Also, clearly it’s time to get that crack in my windshield fixed, huh?)

So, it probably comes as no surprise that I felt like someone shoved my head into a beehive for the better part of the weekend. I spent most of the day Saturday working with a fever or else very premature hot-flashes. And, like I mentioned earlier, someone told me that since it was going to be an unprecedented seventy-five degrees out on Sunday, I better put my big girl pants on and get some work done. It would have been cooler if I’d finished that peak, but my body gave out Sunday afternoon, which meant I spent a leisurely Sunday evening in the laundromat doing six loads of laundry.

The good news is, with the progress made this weekend, that means most of the “addition” is sided, and we’re probably just under half-way done with the entire house. It’s taken us four weekends to get this far, and we’ve been blessed with some truly awesome weather.

My guess is the next four weeks aren’t going to be nearly so much fun, but hey, that’s life. And DIY.