If it wasn’t for the fact that last week Sarah over at the Ugly Duckling House was pulling ahead on this stair challenge when we checked in last week, I definitely would have taken more naps this weekend and spent less time with the sander. Which means this challenge is doing exactly what it’s supposed to… keeping my ass motivated.

In the last week there has been a lot of sanding, and in the last twenty-four hours… a little stain. Here are some well sanded stair treads: It’s become a habit over the last week has been to leave all four sanders and cords in various places on these steps at night, which makes going downstairs in the morning (usually in a desperate attempt to find pants) an adventure. Last night I finally decided to take the plunge and start staining. It started with a lot of shopvac-ing, tack cloths, and kitty deterrents. What? It seemed like a good idea at the time. Cats hate foil. 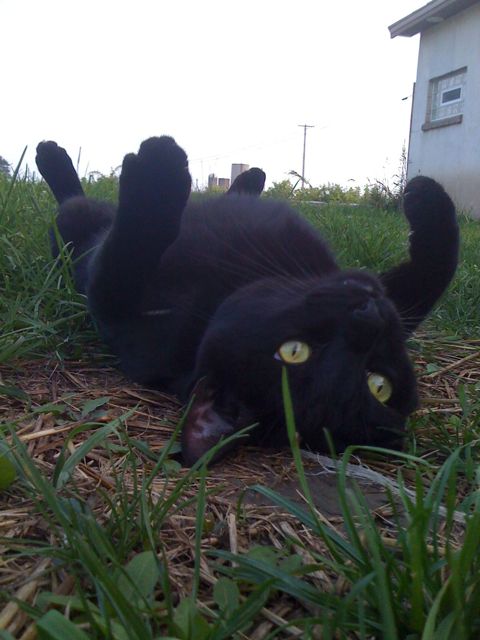 Anyway, like Sarah, I feel like the best way to work on stairs while still keeping both floors accessible, is to paint or stain every other stair. (The tape isn’t for the cat, by the way. That’s definitely for me.)

I’m using the same Rustoleum Dark Walnut stain that I’ve used on the floors in the rest of the house. Kinda makes my heart go pitty-pat. Or maybe that’s the fumes (which I assume some of you think might be getting to me after the strange happenings  in yesterday’s post.)

Make no mistake, we’re still at the looking-worse-before-it-looks-better stage… but it’s progress. I’d guess I’m only about 30% of the way finished with this beast, but I’m also only at about 5% of my estimated alcohol consumption which means it hasn’t been nearly as painful as I thought it was going to be.

Also? I didn’t smash even one of my fingers in a door this week. Win!

Sarah is still ahead of me in this race (as you can see here), but I’m closing the gap.

Update: So that foil trick actually worked better than one would think. So well, in fact, that since the cat was stuck downstairs all night he decided to amuse himself by going to the basement, bringing up a bat, and releasing it in the office. You know what’s really fun? Trying to run down every other step at 1AM in your underwear to catch a bat. Which results in this…