On a long weekend I usually like to plan for a big project, as if that one extra day somehow transforms itself into a an entire weeks worth of time with which to get shit done. I am often disappointed.

This weekend I planned to build an outdoor run for the chickens (something I’ve been saying I’m going to do since early spring.) All I really needed to do to get started on this project is go pick up some lumber. That was my plan, and I had very good intentions about following through with it, until I looked out my kitchen window and saw this… 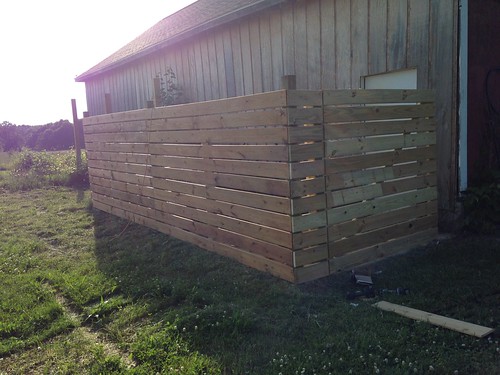 It’s almost done. Almost, but not quite, and for the gazillionth time was like, Ugh, why don’t I just take an hour to finish that fence so I can check it off the list?

Then I thought, you know, that’s really not a bad idea. Finish the fence, then go pick up the lumber for the chicken run…

The fence really just needed a few things. The first was a rigged-up solution to opening the very heavy gate. 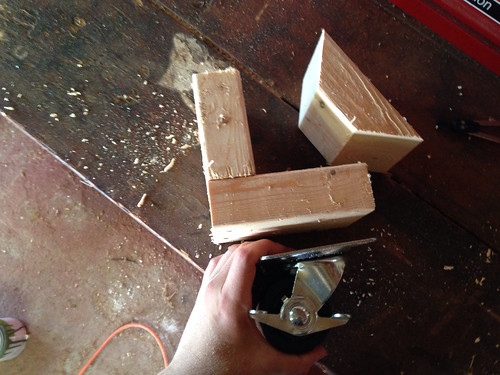 Then I just needed to install two posts and the boards for a little 1 foot section on the other side of the gate. 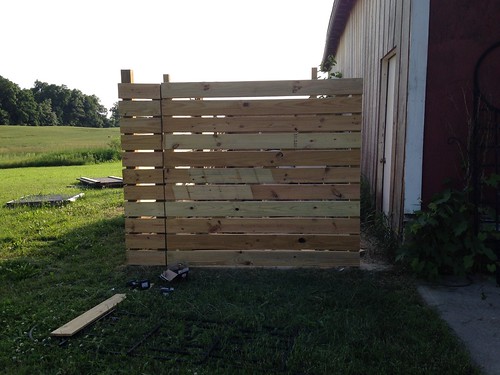 And finish it off by lopping off the tops of the 4×4 posts.

This won’t take more than an hour, right?

(Do we even need to cue the ominous music here? You already know how this is going to go.)

I decided to build a little bracket with a caster to help the gate open a bit easier. (It currently drags on the ground because the weight of it is far too much for a post that’s anchored in concrete the way mine are.) 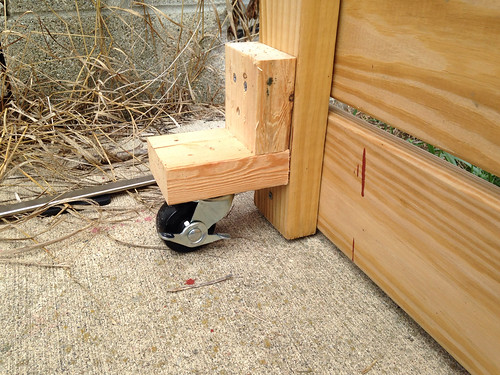 If I’d thought through this a bit more I might have done it differently, but the scrap wood with a few deck screws and an angle brace seemed to do well enough. 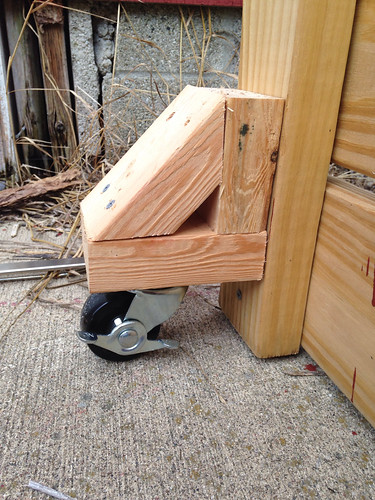 So far, I was on a role. Next up was putting in the 2 4×4’s for the small section of fence on the other side of the gate.

Here, we reach a snag. A snag that was approximately 82 boards deep… 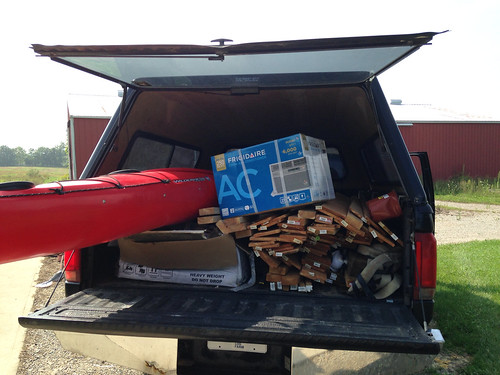 The posts I needed were at the very bottom of this pile. Since I’ve been trying to get a handle on the mess in the workshop of late, instead of just piling all of that lumber on the floor (like I–ahem–usually do) I decided if I was going to unload it from the truck, I might as well load it right on to my second wood rack.

My second wood rack was still in its box on the garage floor, by the way… 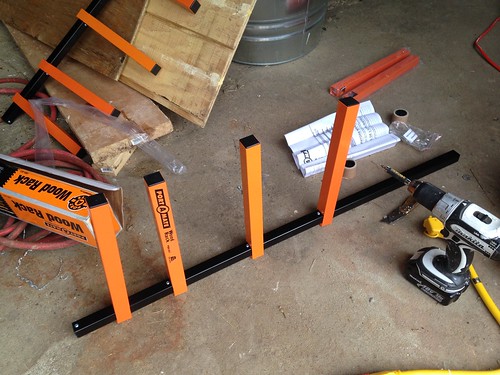 I hadn’t hung it up because I intend, at some point, to re-panel the walls in the garage, and I just figured I’d wait until all of that was done, which, realistically, could be anywhere between now and the end of time. So, eff it, I put the wood rack up on the shitty plywood paneling. 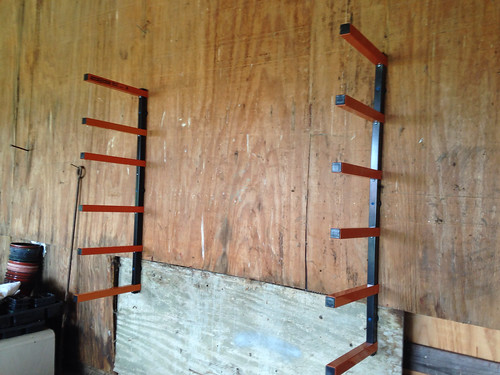 And stacked a ton of cedar on it for one of my winter projects…building more raised garden beds. 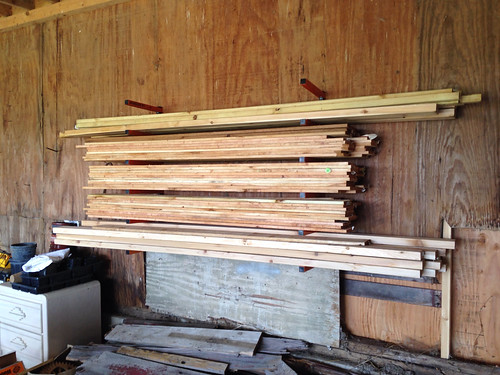 In the spirit of full disclosure, the reason I couldn’t possibly stack this wood anywhere else in the garage at that moment is because it looked like this… 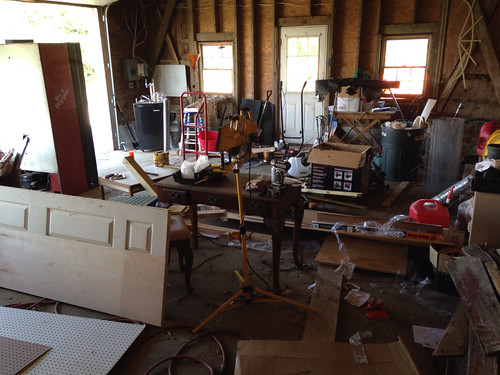 I’m just going to take a moment to laugh at what a disaster I am.

There are a lot of times that I don’t mind being a disaster. Messes are comfortable for me. This mess, however, was a broken ankle waiting to happen. So–as some of you might have seen on facebook–I decided to at least give it one 20 minute pass to see if I could make some small amount of progress. (I learned during my week of trying to get my shit together inside the house, that you can make a big difference in 20 minutes.)

Since I already hung the lumber rack on the wall, I figured a few more hooks wouldn’t hurt… 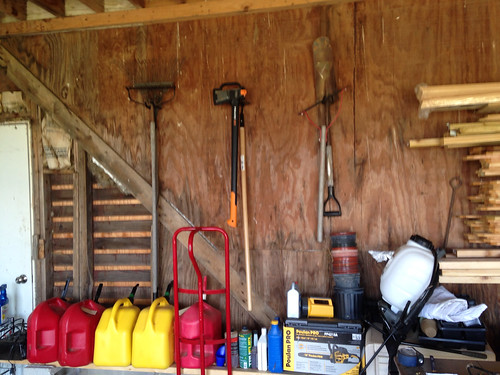 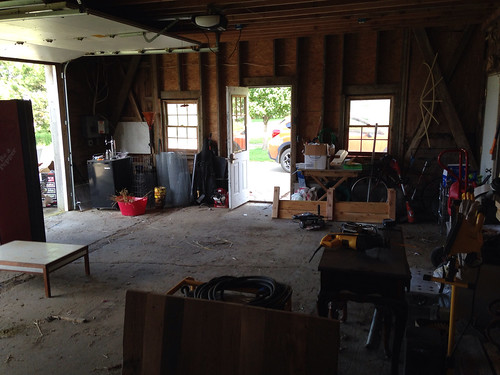 This took about 40 minutes, by the way. But I found like 15 missing tools, some of which I needed to actually install those fence posts which started this mess in the first place. (Although, in their defense, I was going to have to unload the truck to pick up more lumber anyway.)

At this point my one hour project was going on five hours. No one is surprised.

Luckily, of all the posts I bolted to the concrete for this project (some of which, you may recall, resulted in actual tears) the final two went in the easiest. 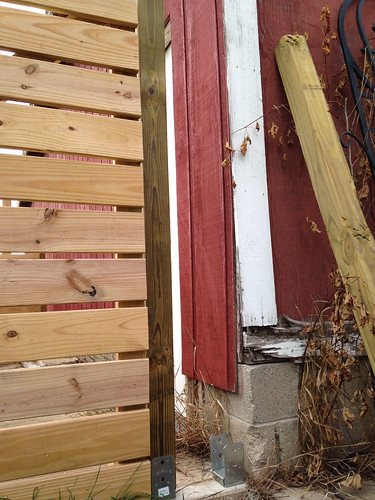 Then, about an hour later… 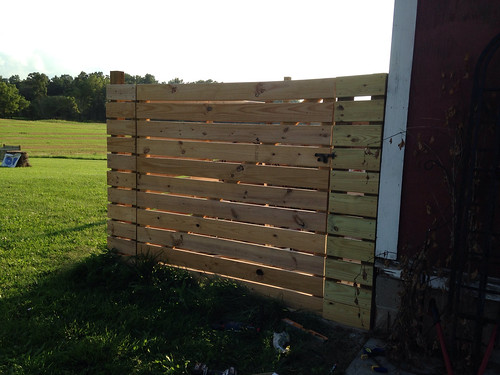 WHY DID THAT TAKE SO LONG?

But me being me, every project is an adventure.

I wasn’t going to come this far without actually finishing the damn thing, so I hauled the step latter and sawsall out to trim the remaining posts. 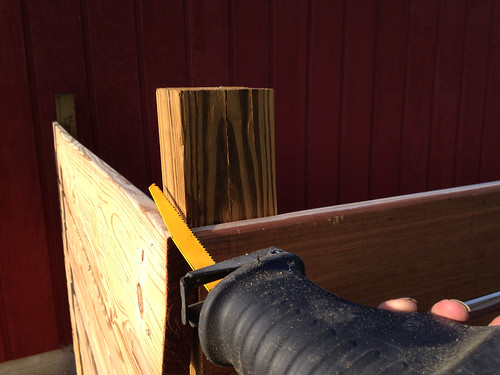 And just before the sun set for the evening… done! (Well, technically the gate needs stain, but I’m done with the construction portion. Let’s not rain on my parade.) 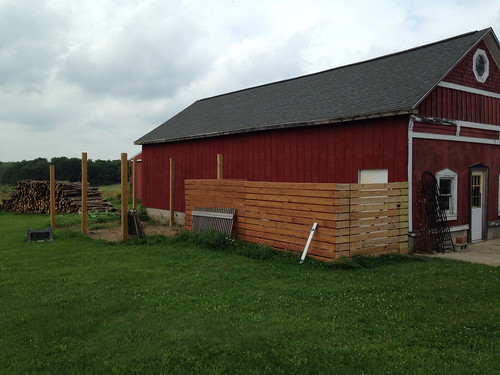 I suspect if you’re reading along this doesn’t seem like much exciting progress. I mean, it doesn’t to me either, and I’m the one doing the work. But consider that two months ago, this side of the garage looked like this…

It’s slow going, but I am making some progress. (And I can walk through my garage without fear of breaking an ankle now, so win-win.)

PrevPreviousA Ride Around the Farm
NextIn the Garden: 2 Summer SaladsNext