Okay, so, listen… yes. Of all the millions of things in the world I could build, this bed is on the list… 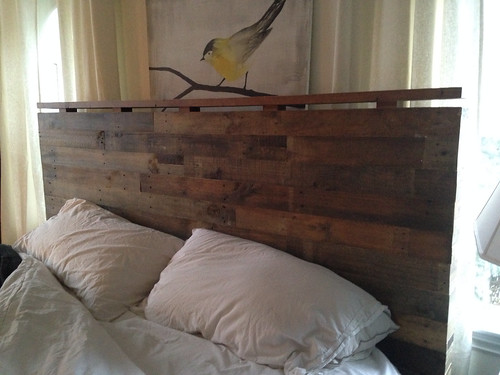 I mean, it’s made of old barn wood and I have a (not-wood) barn filled with a barn’s worth of barn wood. That’s a real thing. My life has become a children’s rhyme. 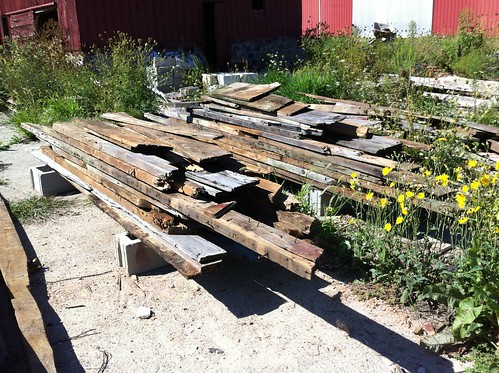 Also, I own ALL OF THE TOOLS. Which looks like an exaggeration because I wrote it in all caps, but, actually, I’m pretty sure I’ve hit a point where I can (and will) build almost anything with the tools contained in my shop. 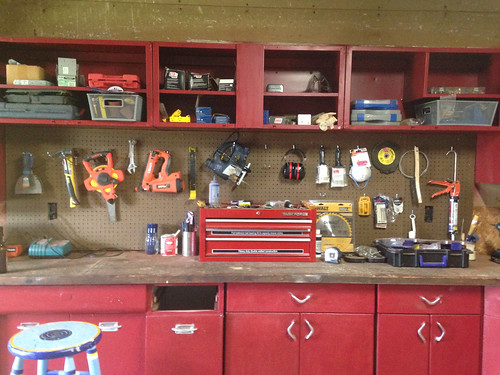 On the other hand, I haven’t owned a legit bed in the last 15 years. I mean, I’ve had mattresses in three different houses I’ve owned, because I’m crazy, but not sleeps-on-the-floor-for-a-decade crazy, okay? But there isn’t a lot of furniture out there that compels me to actually spend a lot of money on furniture. That shit is expensive and I have a tool-and-beer habit to support, after all.

But a few months ago I realized I’m rapidly approaching the end of my third year at the Liberty House (crazy, right?) and after all those nights–over a thousand of them– I was still basically just camping in one of the spare bedrooms in my house. And while there’s a whole big part of me that revels in never growing up (and I’ll still play with all the damn Legos I please) I am an actual adult who would like an actual bedroom.

And, since I have a 48-sqare-foot chalkboard full off all the things I need to do in the next year, and building a bed is not on that list, I decided to buy one…

And, of course, it was backordered for a few months, and in the meantime I decided to paint my “temporary” bedroom, hang some curtains, drink a bottle of wine and make a bird painting for it, and then carry a 120-pound dresser up the stairs by myself, because Stubborn. After all that I was actually super happy with the way that room turned out, and I just sort of “forgot” about the bed I’d ordered.

I mean, I didn’t really forget, but I also thought that at some point they’d call to tell me the bed was no longer on backorder and I’d tell them I was no longer interested, and I’d continue to be happy with my mattress-and-drunken-bird-painting bedroom. Except instead what happened was that they called and told me the bed was on a truck about to be delivered to my house and I was like…

Okay. I’ll just open a bottle of wine now, then.

Furniture delivery is a singularly stressful experience for me. It combines almost all of the things I dislike most in the world, which basically boil down to “help” and “things I can’t control.” And, honestly, I wasn’t even that excited about having the bed at this point… I just figured it was another thing to store somewhere in this house until the master bedroom is finished… sometime in 2020.

But then the guys delivered it. All 300 pounds of it. And once I saw the headboard out of the box I was like… okay, actually, that’s kind of awesome. 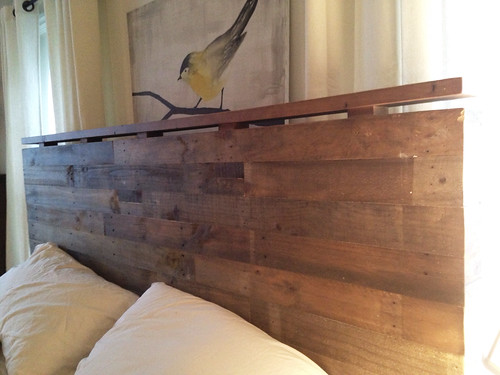 And despite their helpfulness, I did not want the delivery dudes in my house longer than necessary because it makes my eye twitch. So I had them put the 150-pound headboard in place, leave the rest in the hallway, and go.

Saturday morning I decided I was far enough in to this thing that I was going to put the whole bed together in my “temporary” bedroom, so I flipped my king-sized mattress up against the wall, moved the box springs and frame out of the way, and tried to assemble the new bed. Except it was missing a critical piece… 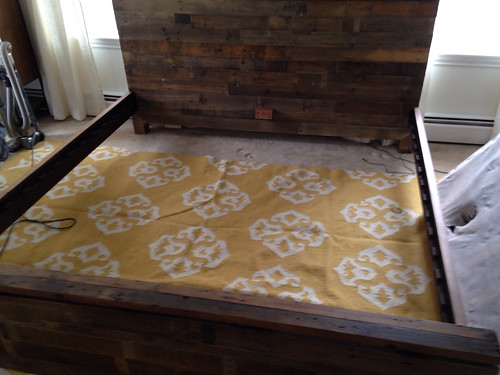 There should be a center brace that runs between the headboard and footboard and supports the slats for the mattress (since this is a platform bed with no box-spring.) That thing is fairly critical and I still have no idea if it was on the truck, or back at the workshop of the people who built this thing, but at that point it really didn’t matter because I now I was hell-bent on assembling the bed I wasn’t really excited about in the first place and never planned to assemble in my temporary bedroom. And whereverthehell the missing piece was, it was not at my house.

Good thing I own ALL THE TOOLS, right? 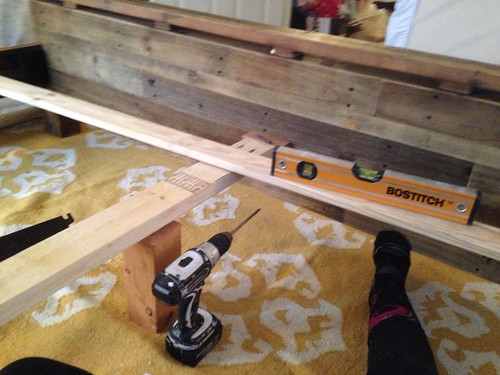 I plan to get the actual piece that goes here eventually (out of principal at least, this is the most expensive piece of furniture in my house.) But, in the meantime, I cut a 2×4 down to act as the center brace. And then I attached to to the pre-existing wood blocks with some pocket screws, and added a couple of 4×4 “feet” to take the weight off the screws. (I love my Kreg, but those screws don’t have the shear strength to support a king sized mattress with the added weight of me. And the cat.) 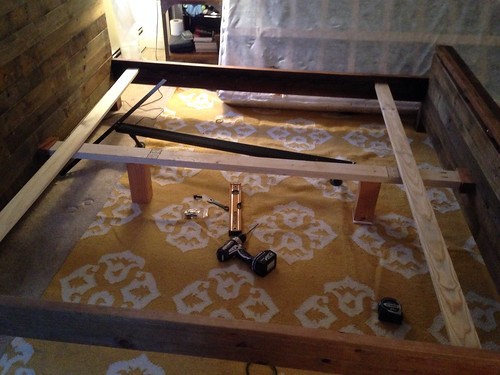 So, the bed I definitely could have built but decided not to (because I didn’t have time), and then bought, and then decided I didn’t really want (because too much time had gone by), finally showed up without a critical piece and I had to build parts of it anyway. Really? Tell me the Universe isn’t fucking with me. 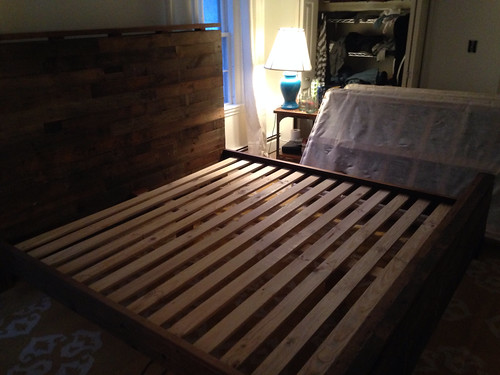 But I don’t even care if it is, because that is one sweet bed. 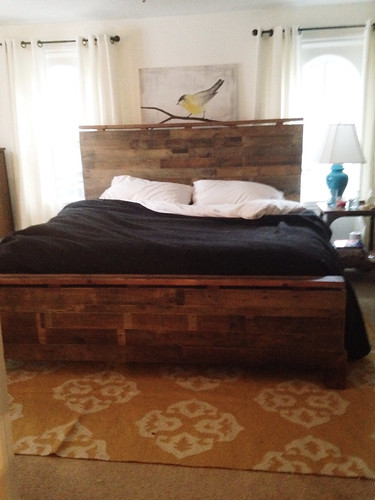 And the whole reason I own ALL THE TOOLS and have a ton of scrap lumber on hand is because if the difference between a bad day and an awesome day ever hinges on being stressed out because I don’t have all the parts to assemble my new bed, or just building those parts myself and being done with it… well, I don’t run a do-it-yourself website for nothing, you guys.

And I am so glad I bought this thing, instead of waiting another couple of years until I had the time/energy to build one. Especially when you look at where I was a month ago… 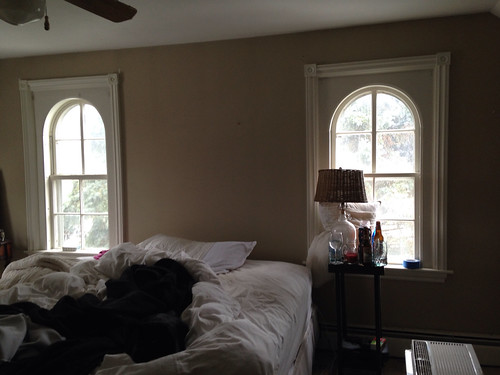 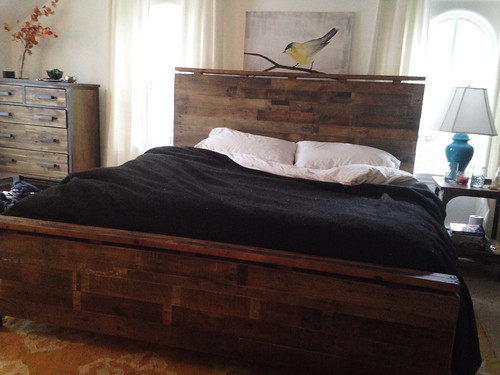 Complete with a large pile of laundry that will almost certainly never get folded or put away hiding on the far side of the bed. Because, let’s not get too carried away with the whole “all grown up” thing, okay?

(Also, I know my drunken bird painting no longer fits in that space but, listen, one thing at a time. And next on the list for the bedroom is dealing with my vanity table… a whole other story.)