As a person who spent a fair number of years living in far more tropical climates, and then willingly and happily decided to move back north, I very much appreciate the changing of the seasons. I do. And I also very much appreciate building things. But that doesn’t mean there isn’t something about a long winter mostly filled with a never-ending bathroom project that is just fucking soul-crushing.

It might have been slightly less soul-crushing if there was an actual place to take an actual bath in this bigass house, but there’s not when it takes you four effing months to get a tub surround tiled. That’s the catch-22 of my life, right there.

So, while it probably would have made more sense for me to spend last Saturday either working on said bathroom or packing for that week away in Mexico, instead my mom drove up to the farm with a couple of bottles of wine, and we decided to build a duck house. 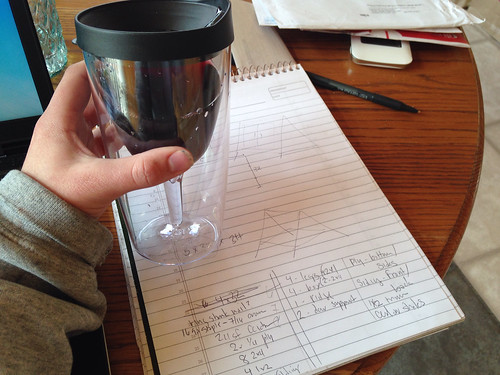 Of course we did.

Okay, and, 1.) YES. Those are wine sippy-cups. Super handy for when you’re drinking and playing with power tools. Also 2.) you are, in fact, looking at the full and complete plans and material list that I drew up for building a little A-frame duck house. 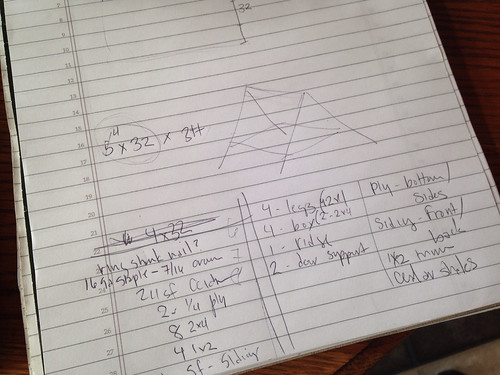 So basically you understand why I can no longer date engineers.

Also, this was the BEST IDEA EVER.

Even though I should have been freaking out about a number of other more pressing projects, instead I got to spend some time laughing with my mom, and working on a project that so far has been really fun build. It was all my favorite parts of building—using ALL the power tools, making sawdust, knocking things together quickly, and not much too worry about—plus an extra set of hands to help me hold/find things when needed. And, of course, we also took a few breaks to hug some donkeys. 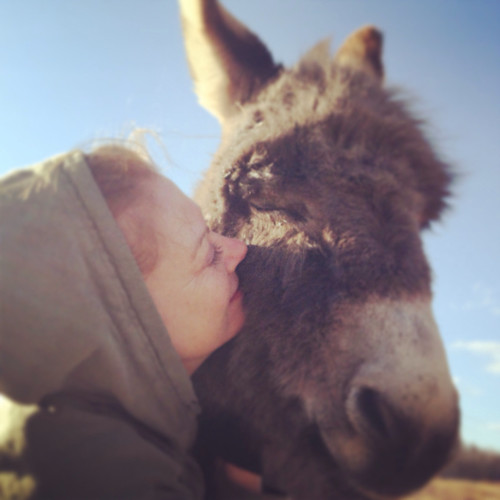 All the joy, you guys. It was just what I needed after a long, hard winter, and just before spending some time on the beach with my dad.

I’ll do a full “how I built this thing” post when it’s done, be here’s the overview. We started by building the A’s, which involved a lot of me doing what my mom (the math teacher) calls “new math.” 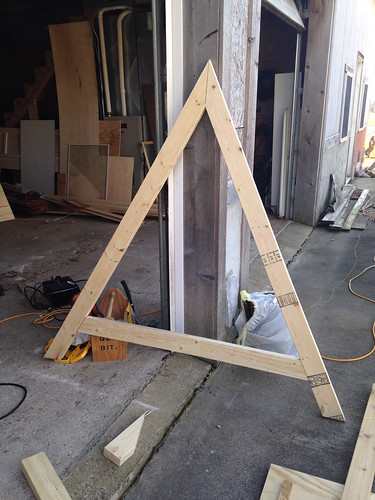 I insisted I was not, in fact, doing any math, and she insisted that I was “just using a non-standard unit of measurement, and that’s okay, honey.”

Which it totally was until we got to this point, when the platform was a bit wonky… 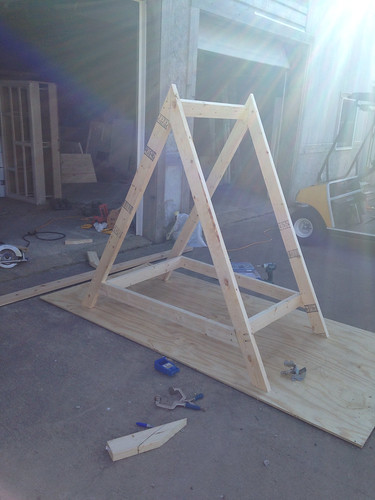 After staring at it for a solid minute, my mom comes up behind me and says innocently, “Um… is this because you were using a non-standard unit of measurement?”

Yes. Yes it is. (All my engineer ex-boyfriends just collectively smirked.)

But, listen, two small adjustments with the pocket screws, and all was straight and level in our little world again.

I also learned some fun things about building a triangular structure. For example, this shit won’t work… 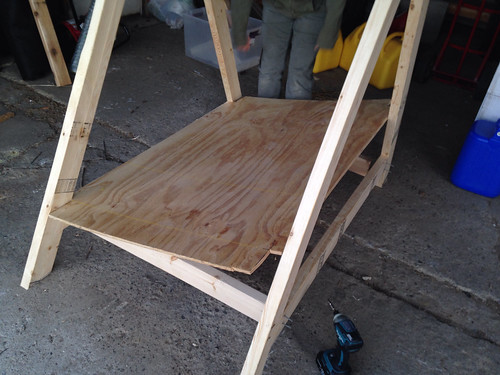 Right? Duh. But listen, some amount of wine had been consumed at this point. That’s all I’m saying.

Luckily I used screws to assemble everything instead of using the framing nailer, which made any and all minor logistical miscalculations easy to fix.

We got a pretty good start on Saturday, ending here… 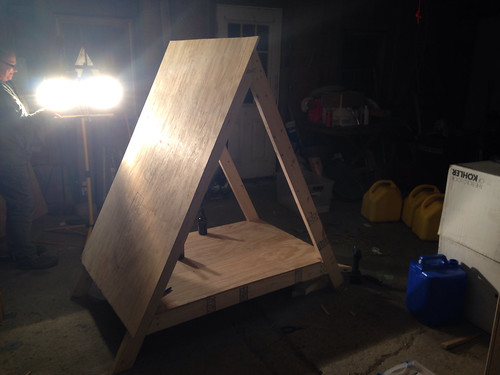 And then on Monday, 30 minutes before I should have been leaving for the airport, I decided that I was only going to be able to relax on vacation if this thing had some siding. Because that’s normal.

This was about the time my beloved Paslode corldess finish nailer started giving me some shit. I’ve had this thing for three-and-a-half years, and it’s worked great right up until Monday, at which point I literally beat myself bloody trying to get it to work, and then switched over to the air compressor and my Hitachi nailer. Because I own way too many tools to take that kind of shit from a nailer RIGHT BEFORE VACATION, DAMMIT. 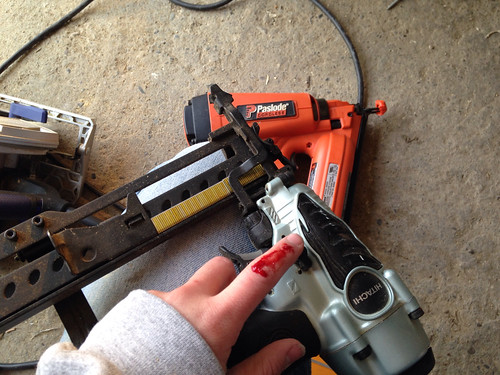 It was the tiniest of scrapes. There was no reason for the profuse bleeding but it would not stop. 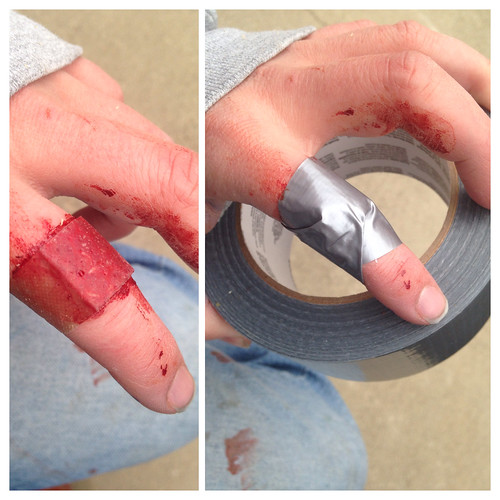 Good thing I own a lot of duct tape.

Actual conversation I had with a TSA agent while going through security the next day:

Him: What’s that on your hand?

Me: Because I ran out of bandaids?

They let me through eventually.

Anyway, here’s where I ended up… 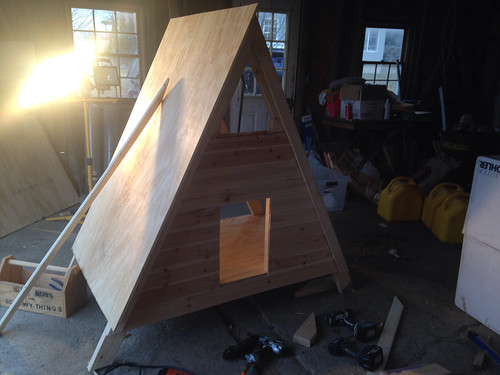 Up next: Finishing the siding, attaching a hinged roof panel on the right side, and installing some decorative cedar shingles on the roof. Hoping to have this wrapped up in a week or two.

Also hoping I never forget the moment while we were building this thing where my mom turns to me, sitting in the middle of the half-built a-frame, trying to hold two different boards level while I screw them in, and says, “Honey, I’m a human horse!” And then I just stand there blinking at her for a minute, unsure how to respond, before she clarifies, “A human sawhorse I mean.”

I sure do love that woman.