I Used To Feel This Way About Houses

My lawn mower has been broken for six months. This is mostly a non-issue on the farm (despite my previous posts about things that happen out here when you don’t have a lawn mower) because 1.) I now have a tractor with a brush hog, and 2.) two years ago I hired a professional to mow my lawn every summer, which is one of the concessions I’ve made to “doing it myself” that allows me to maintain my job, the rest of the farm, and what’s left of my goddamn sanity.

It was a great decision. Even though there have always been people (like my grandmother) willing to help mow… 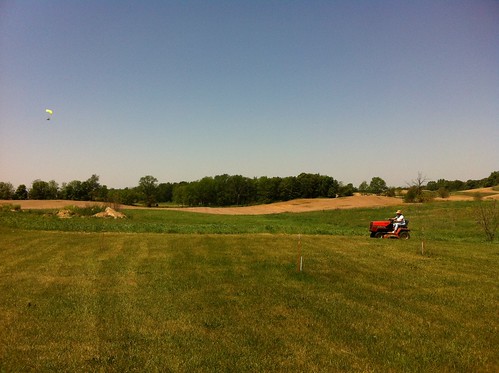 And now, even though I have a tractor and a professional, there are still some spaces on the farm that aren’t quite big enough for the brush-hog (or could use a finer cut) and aren’t a part of my regular-mowing schedule. Also, my grandpa gave me this mower, and if there’s a thing I learned from my grandpa it’s that you don’t let a piece of equipment sit around broken… 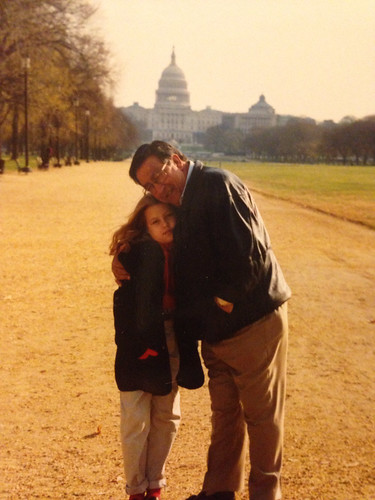 And also how to rock a blazer and penny loafers. (Yeah. That’s how they used to dress me. I think my face says it all.)

So, what happened with the mower is that last summer I drove it through some high grass in the pasture that the donkeys had been snubbing for a few weeks, and then there was the unfortunate noise that indicates something just effing broke. After that, even though the PTO was on and you could hear it running, the blades on the mower weren’t turning.

Right about the time this happened my neighbor (have I mentioned lately how much I love my neighbors? because they are the best) gave me a crash course on belts and mowers, and even though we couldn’t see the thing, we determined that the belt that controls the blade either broke or jumped off the pulleys.

And so it sat in my barn for six months. Broken.

Totally unacceptable, you guys. I put “fix mower” on my bigass chalkboard of things to do this year because while it would be useful to have it fixed for the few little things I could use it for, it’s more important to me that I’m respecting, maintaining, and fixing all the equipment that makes it possible to keep this farm going.

So. First. I drank some sangria. 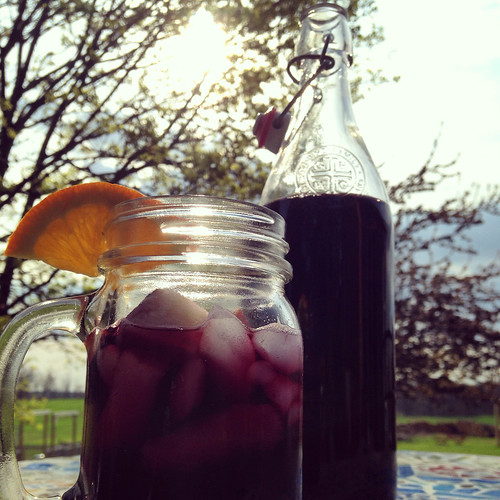 (Okay, first of all, it was Sunday, and I’d already busted my ass all day on other projects SO HOLD YOUR JUDGING. Also, I’m pretty sure I’m a better mechanic when I’ve been drinking.)

So, sangria first, and then I took the mower apart at the expense of two of my knuckles. 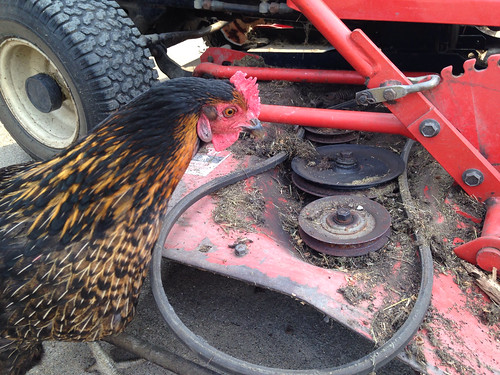 And, honestly, I didn’t even know if I was taking the right parts of the mower apart. I just started unscrewing bolts, hoping it would make sense at some part. Then I found that, indeed, there was a belt that had jumped off some pulleys, but since I have almost no working knowledge of belts and pulleys, I had no idea how to put it back on. 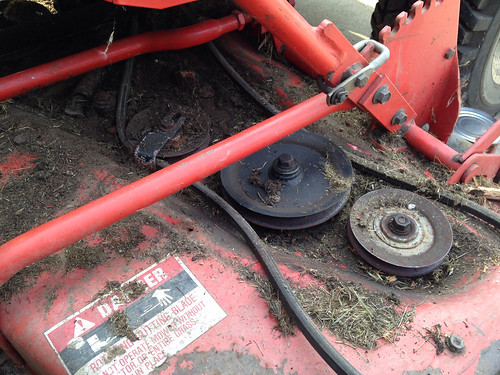 So I started turning pulleys around and messing with the belt and learned:

Not enough to get everything working again. So then I started googling things, and learned:

Still, not quite enough knowledge to “do” anything with, so I made my last-resort phone-a-friend and called my dad.

My dad is, without a doubt, the smartest dude I know about any subject ever on the planet. And because we have the exact same temperament this actually was a small point of contention between the two of us since I was the age of five and thought I should be in charge of everything, ever. WONDER WHERE I GOT THAT FROM. 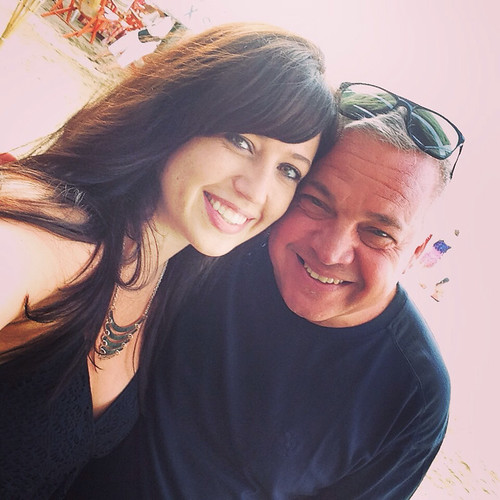 Yeah. No resemblance at all.

There were a lot of years there where I wouldn’t call my dad for help out of principle (or, more accurately, ego) but this farm has taught me that I’m going to have to learn a lot of stuff about a lot of things, one hard lesson at a time. And sometimes those lessons require me calling my dad (who knows everything there is to know about pulleys, of course) while he’s all “could you just let me finish my sentence about the damn V-pulleys?!” and I’m all, “Will you listen to me? I have no idea what the fuck a V-pully is, but I’m pretty sure there isn’t one on this mower!”

And, eventually, I shut up and learned some things like:

Then my neighbors walked over and saw that I was having issues with the mower and between the fact that I live next to a smart guy who fixes up WWII jeeps in his spare time, and ALL OF THE THINGS I just learned about pulleys… 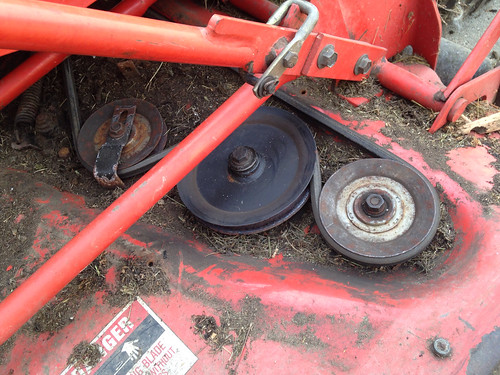 It seems like such a small thing, especially after you look at the difference between completely-effing-broken and fixed, but… But. This is how I used to feel about houses. There’s a point where you just have no context. You’ve never had to go through the mental exercise of figuring out how belts fit on pulleys, or how tiles stick on walls, or how sinks drain, or any of the other thousands of things that go on inside a house, and that shit is overwhelming.

It’s really easy to believe you’ll never understand it. Certainly never be able to understand it well enough to fix it.

And I’ll tell you what, the only thing that got me from “I don’t know a damn thing about pulleys” to “holy shit, I just fixed this thing” was the pervasive belief that there isn’t a thing out there that I can’t fix, or understand, or deconstruct and put back together again. It’s a belief born from years of almost-not-believing in myself and then pulling through at the exact minute I’m ready to give up. It’s a belief born from understanding that this shit is not that hard. It feels hard–like anything else that we don’t know about or haven’t done before– but it’s really just another lesson teaching us how to be stronger, how to be smarter, how to be more self-sufficient.

So, even though these days there isn’t a thing on a house I don’t feel equipped to fix, there are still plenty of times I feel at a loss. And if there’s anything I could share with everyone out there going through “a thing they don’t think they can do” it’s this… it’s the acknowledgement of the feeling of “I can’t” and the realization of– even though it won’t be easy– you sure as shit can.

That’s what dealing with belts and pulleys taught me last weekend anyway.

PrevPreviousAround The Farm: Spring Maintenance
NextThe Happiest Girl Who Ever Had To Pull A Bee-Stinger Out of Her NeckNext