At some point on Sunday night things related to the kitchen remodel started to snowball, and by Monday morning it reached what can best be described as a complete shitshow culminating in, well, this… 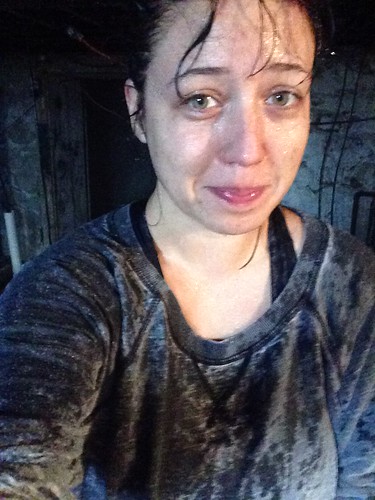 About five minutes before I was supposed to leave for work.

Yeah. You’re wondering how I ended up covered in five gallons of basement water on a Monday morning and the answer is because Monday, obviously.

So, let’s back up a minute before we get to the this-is-why-I’m-soaked-in-basement-water-at-9AM story. Thanks to my mom and grandma, I’d already made some great progress in the kitchen over the last week, but it is far from being done, and don’t think for a second those women were about to just let it go at that. What? You think I was born from quitters? Not a chance.

On Friday they informed me they were coming up to work on the kitchen and spend the night on the farm, and I just love these women–and their willingness to jump into my projects–so much I can’t even tell you. (Also, I need better guest bedrooms stat.)

Anyway, I’m working from home Friday afternoon, holed up in my office, while my mom and grandma are here patching nail holes on the wood ceiling. At some point I hear this exchange from the kitchen…

Mamie: I don’t know if I should be up on the ladder after we open the wine…

Mom: Oh, well, you know… the more you drink, the lighter you fall!

First of all, who is surprised I’m related to these women? Because this exact scenario plays out in my head on any given Friday, except it’s just me… talking to myself. Also, no one actually fell or was in danger of falling… we didn’t open the wine until later.

But, we (they) did make some serious progress on filling in nail holes on the ceiling. 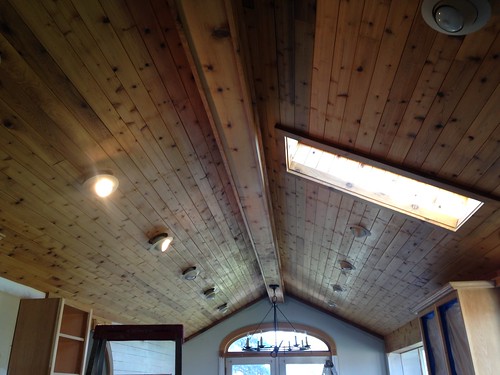 I decided to take the cabinet over the range out and replace it with a range hood (which I’m going to build a custom cover for.) 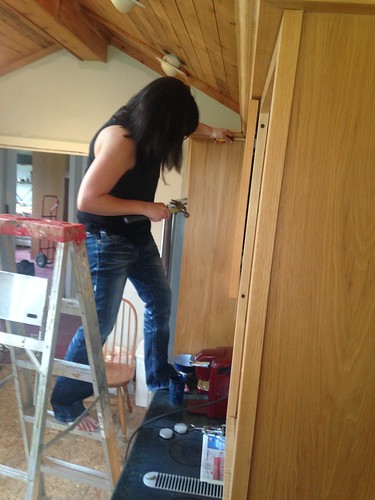 And my grandma was back at it again with the hammer drill to remove the rest of the marble backsplash. 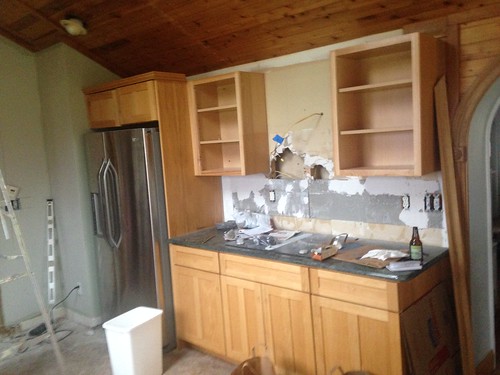 Yeah some of the tile didn’t come off the drywall so well, but that just made running the electric for the new hood easier.

Then we got down to the business of taking all the doors off the cabs, and my mom started prepping the boxes for paint… 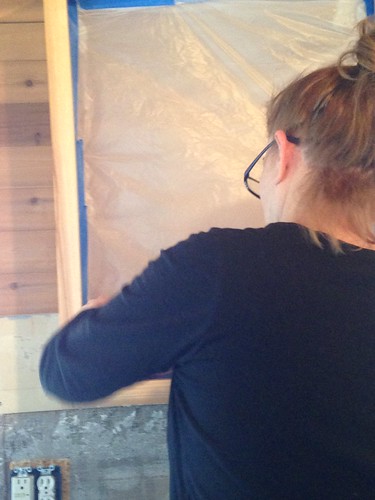 And I started sanding. So much sanding. 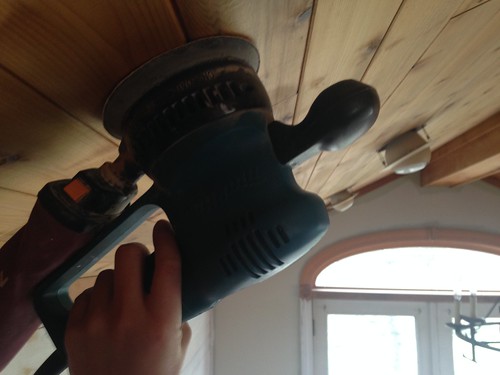 Honestly, this is probably the exact reason I didn’t start the kitchen renovation before now. I love a big, messy project. I love being in the thick of the work. I love building shit and seeing rooms transformed with a few coats of paint. But damned if I don’t hate doing the prep for all that, and 90% of this kitchen is going to be prep. Patching. Sanding. Priming. Ugh. But I’m determined to do this thing correctly, so it is what it is. All the wood is getting a light sanding before the primer and I’m about 1/4 done with it at the moment.

The good news it that I put myself under a little pressure to get some other work done in the kitchen over the weekend by scheduling an electrician to come Monday morning, and some of that work included actually building things. Like a custom cabinet to extend the “peninsula” in my kitchen and hold my microwave. 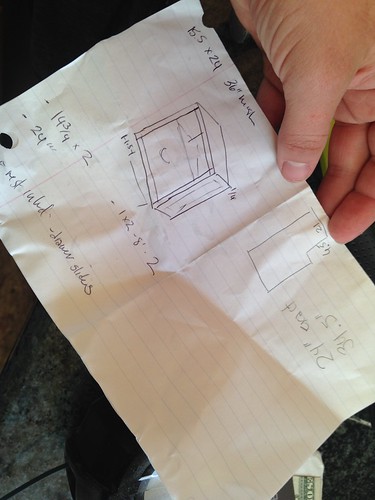 (Yes. Those are the complete plans and dimensions I use to build a thing…)

Well, next thing I know it’s after 3PM and I still needed to do farm chores, build the cabinet, and open a few walls for the electrician who was coming first thing Monday morning. That’s not an insignificant amount of work to start late Sunday afternoon when there’s only half a bottle of wine left… 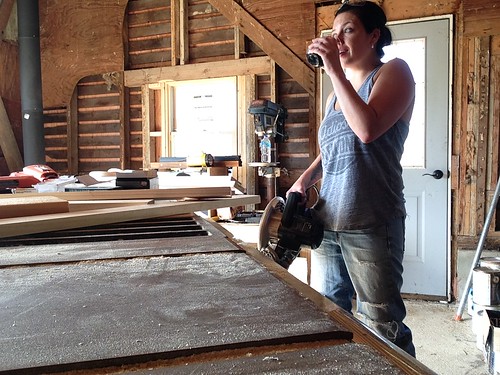 But I don’t own ALL THE TOOLS for no reason, you know. Suffice it to say that you can do a lot with a piece of 3/4″ plywood, four hours, and a napkin drawing. 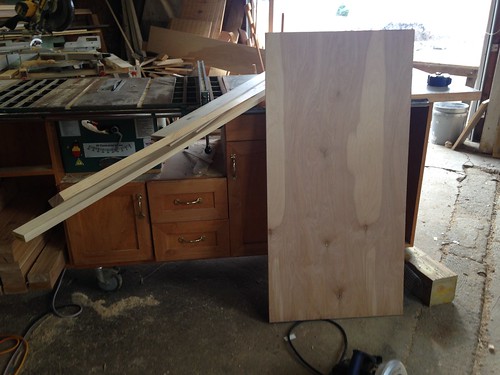 The reason I decided to build this cabinet custom is because… they don’t make cabinets like this. Specifically, a cabinet for the end of an island that only has a toe-kick on two sides and is meant to house a microwave on the top. 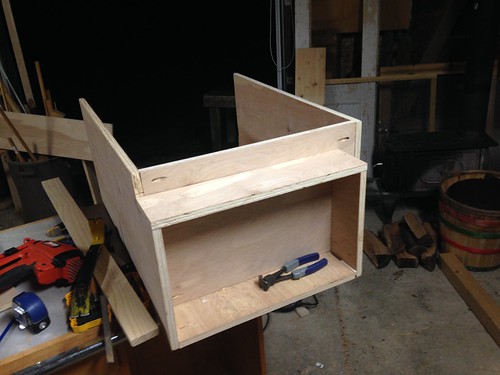 It actually turned out pretty well… 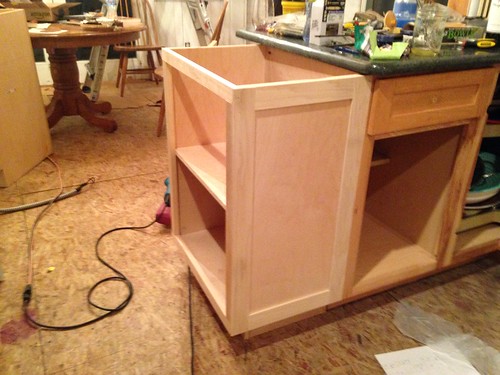 And it was a helluva fun build. There’s nothing better than being by myself in the shop on a rainy Sunday afternoon, with the music on and the sawdust flying.

Originally when I was thinking about extending the peninsula I wanted bookshelves to house all my dozens of cookbooks (books in every room, remember?) but the only shelving-style cabinet that would work here was this… 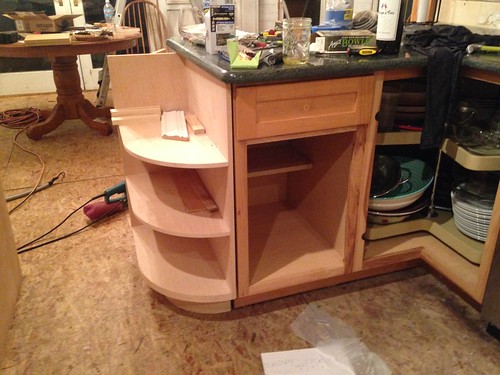 So I bought it, and then I put it on the end of the existing cabs for a bit to check it out. (It’s actually been sitting there since back in August when the cabinets I ordered came in.) So I’ve had plenty of time to soak on this, and what I decided was… I hate it.

I don’t like the look of that rounded corner, and the 12″ shelves also aren’t that useful. In the end I decided if I was going to extend those cabinets what I want most is to keep the microwave off the counters. I didn’t have quite enough space to put the opening on the right side of the cab, so it had to be on the end… 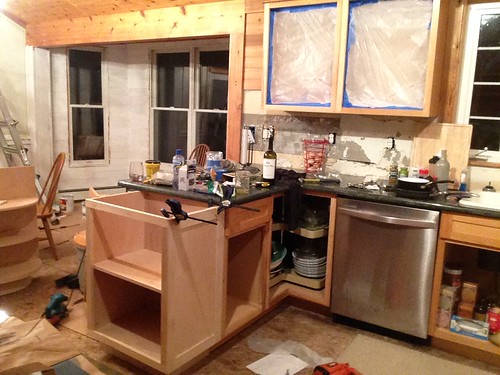 I’m still not sure if I’m going to make the bottom section of the cabinet a shelf or a drawer. But the reason it was critical to get this done Sunday is because the cabinet needed to be installed for the electrician before Monday morning. By the time I got it finished and in place I was done for the day, so I planned to get up early, cut out some drywall before the electrician got here and then head off to work. Just like that.

What happened instead was the cat woke me up at 4:30 AM, and then I stared at the ceiling for a few hours, then finally feel asleep about 15 minutes before I needed to be up cutting drywall.

So I drag my ass out of bed, start searching around for my oscillating saw (my favorite way to cut a straight line in drywall) aaaaannnnnd… nothing. I own two of those damn things and I can’t find either of them. So, fine, the electrician shows up, we walk-through the work that needs to be done, and as we walk down to electrical panel in the basement, I find this… 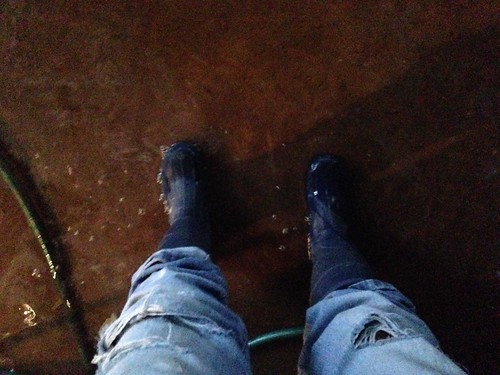 That’s a good 3″ of standing water in the basement, which, actually, is not wholly unusual this time of year. That’s a post in and of itself, but I’ve learned to deal with it fairly quickly at this point. I have a pump I can hook up to 100′ of garden hose that will pretty quickly clear the basement of water. At this point I have 20 minutes or so before I need to leave for work, so I go into superwoman mode. Inside of 15 I have the pump hooked up and draining… 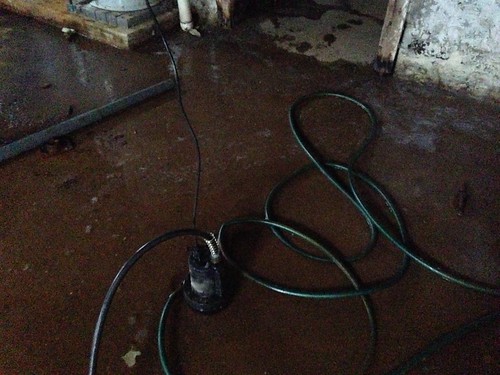 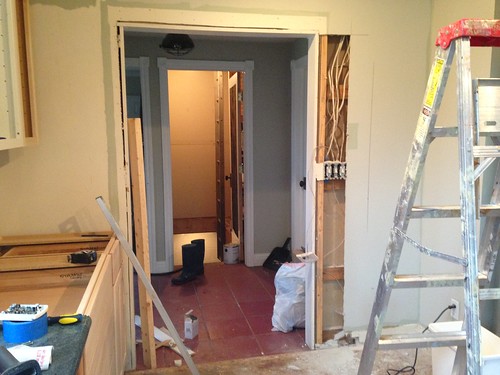 I don’t have time for gloating at this point, but I’m sure I said something cocky like, “Oh, is that all you’ve got, Universe?!” in my head because those were two fairly sizable hurdles to throw at me before 9 on a Monday when I’ve only gotten a few hours of sleep and I handled the shit out of them.

And then, in a fit of overconfidence I notice the hose is leaking a bit where it attaches to the pump and I figure if I just tighten that up a bit the basement will drain even faster and I may be on time for my work meeting.

Do you know that a water pump sitting on the ground without a hose attached to it can shoot water all the way up to the ceiling of a basement? Okay so picture that, except my face was 18″ away from it when the hose came off…

I believe that was the Universe responding with, “Oh no, this is all I’ve got.”

You can imagine the look on the electrician’s face when he’d just seen me walk down into the basement –fully dry– and then 90 seconds later I walk back up the stairs looking like that.

And that is how, inside of 48 hours, my kitchen renovation went from worse to better to worse to, well, soaked.

Progress is progress, but sometimes it ain’t pretty.

So, here’s what’s next on the kitchen:

Depending on whether or not I can stay out of trouble for the next few days, I might be able to accomplish that in one weekend (two at the most) and then I’ll be ready for the biggest part of this project… spraying the cabinets.