As a general rule, I do not get excited about things that are related to doing the dishes. (Shocking, I know.) I mean, unless the thing is a magic wand that I can wave and the dishes are magically done… that I would actually get excited about. But everything else? Meh.

So it came as a bigger surprise to me than to anyone that the thing I’m currently most excited about in my mostly-unfinished kitchen is the damn sink. 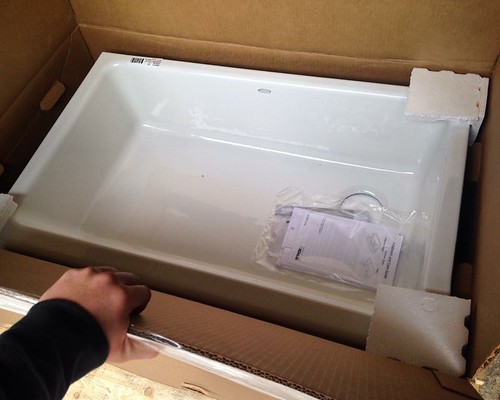 Right? Ugh. It’s like I don’t even know myself anymore.

I will say this. I bought 95% of the things I needed for this kitchen remodel back in July of 2015. Cabinets. Hardware. Appliances. And all of it sat in boxes for a good seven months before I actually tore into the kitchen. There was plenty of time to find and purchase a kitchen sink, but I didn’t. Even after I started the real work, and after I realized I was going to fall behind if I didn’t pick out a sink soon… I still didn’t buy one.

Then I mentally called myself names for a while and told myself to get my ass in gear so the kitchen project didn’t get stalled and… still didn’t buy one.

Then I made some half-hearted attempts to research sinks, balked a little (uh, a lot) at the cost of a solid cast-iron farmhouse sink, decided to handle the whole sink problem the way I normally like to handle my dirty-dish situation… ignore it and hope it goes away.

But finally, finally something clicked. Brittany (friend, and fellow power tool junkie from Pretty Handy Girl) posted something about the her kitchen renovation from a few years ago, I saw her sink, and I was like, BRITTANY TELL ME YOU LOVE THAT SINK SO I CAN JUST BUY ONE AND BE DONE WITH THIS PLEASE. And she obliged (but with less caps than I used.)

The sink is the Kohler Whitehaven self-trimming sink. Brittany has a 30″ sink, but my sink base cabinet is an unprecidented 39″ wide, so even though I wanted a smaller sink, I ended up with the 36″ version, and still had to modify my cabinet a bit to make it work.

Brittany’s advice was that it was an awesome sink, but it will get dinged up from pots/pans, so to make sure I also got the Kohler cast-iron cleaner, which totally takes care of any dings. Okay, done. I got two bottles just to be safe.

So, in the process of the kitchen renovation, I had a big, strong bearded man help me remove 2 of the 3 slabs of granite, but I left the existing sink and surrounding counter as long as possible because I have already maxed out the number of dishes I’m going to wash with a hose and a bucket in my life, okay? 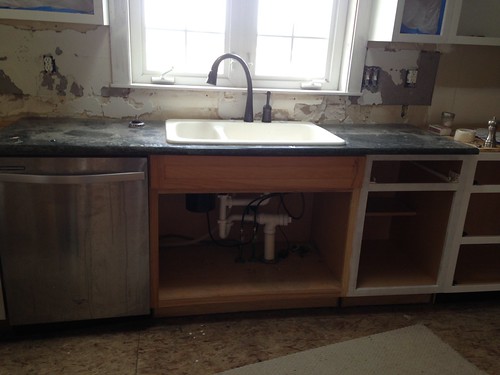 So this is what it looked like for a couple of weeks, then, one fateful Saturday, I decided the old sink was coming out and the new sink was going in that day. (Ha.)

Here’s how I pictured this going in my head: Remove sink, pick up granite that would inevitably crack around the sink hole (the other pieces did too, no matter what we did to try and keep them flat and together), remove granite one piece at a time, modify counter, install new sink (which, incidentally, weighs 150+ pounds), hook up plumbing, done!

I figured I could get as far as moving the new sink into place by myself, lure a friend or two over with the promise of some cold beers to help me get the sink in place, and all would be well. (Again… ha.)

First of all, that damn sink was cemented in granite and WAS NOT COMING OUT.

I know, because I tried to get it out with this… 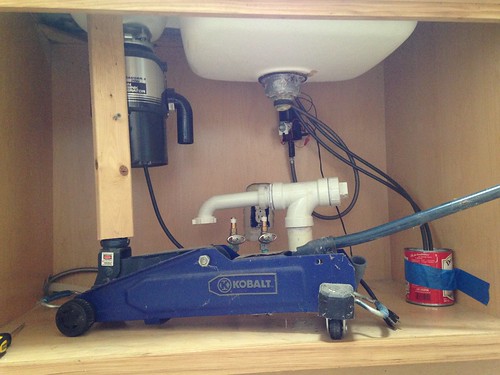 And instead of the sink popping out, it ended up lifting the entire counter, sink still attached. So I thought I may be able to get this whole thing out in one piece without it breaking, and I would much rather have a functional section of granite and sink to donate to someone instead of busted up slabs.

So I spent a good hour lifting the thing up on wedges to try and move it off the existing cabs. This, by the way, is why I (barely) bitch when my trainer makes me do hundreds of squats in a session. Because sometimes I need to be able to lift a section of granite counter by myself… 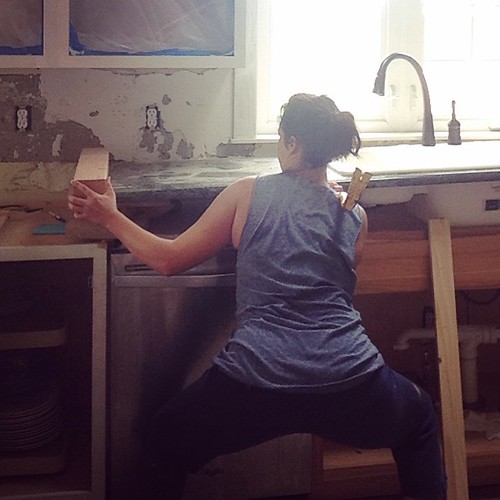 But, of course, when I was one lift away from having the counter clean out of the way, this happened… 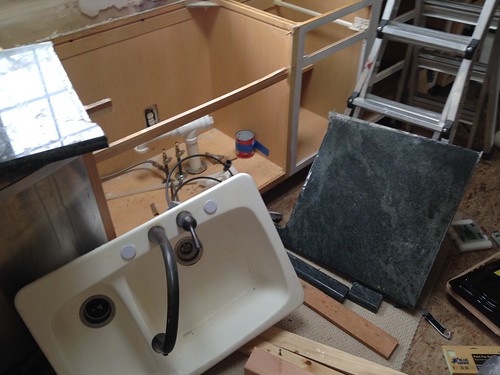 This piece of the cabinet did break when 200+ pounds of granite and sink landed on it, but in retrospect I should have just removed it from the get-go and everything would have been a hell of a lot easier. Lesson learned. 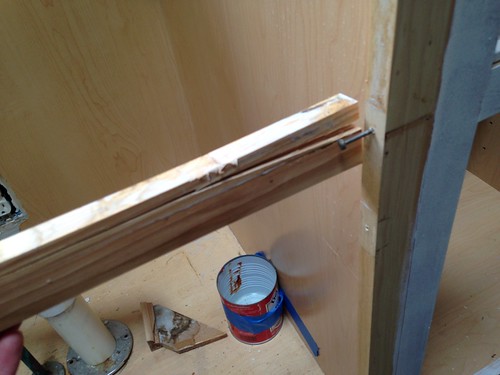 Now, these self-trimming sinks are made to fit in typical sink-base cabinet sizes (i.e. 30″ or 36″) with minimal modification. Since my cabinet is 39″ I needed to make a new front piece the right size for the sink. Luckily, I own all the tools. (And this only required a couple of them.)

Here’s the tracing of the template on to 3/4″ cabinet-grade plywood (I use graphite transfer paper instead of cutting the original template as suggested): 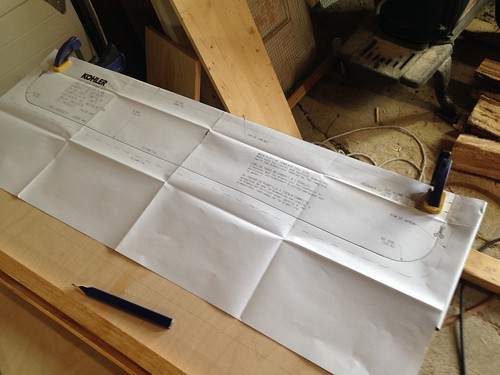 Cut out with a jigsaw: 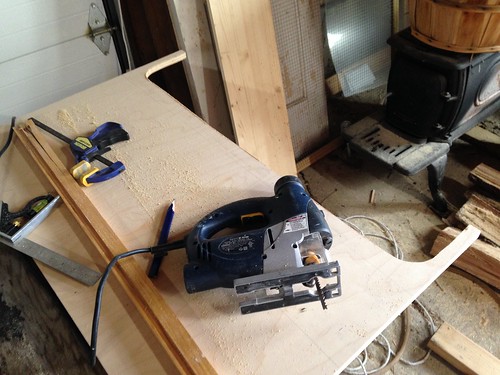 Rip down to size on the table-saw: 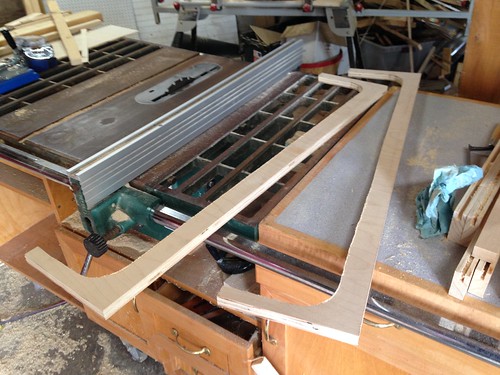 (I actually didn’t love my cut on the first piece so I made a second one as well.)

Then I put the new piece in place with pocket screws: 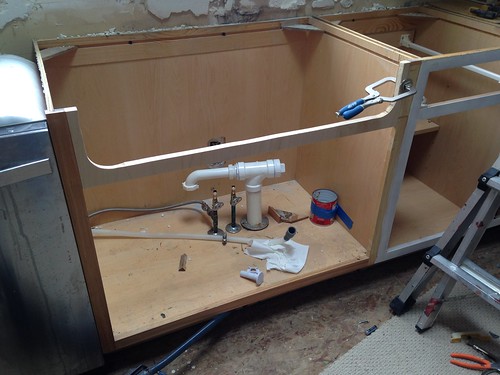 The sink itself is effing heavy, and requires some additional reinforcement in the cabinet. I installed horizontal and vertical supports (all of which had to be slightly modified from the installation instructions because of the size of the sink base.) 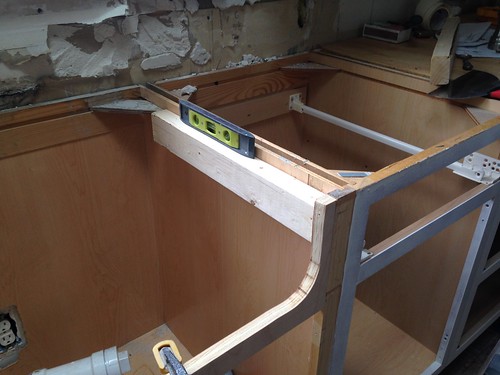 At this point I was seven hours in to a project I thought would take “a couple of hours” and found myself just standing in my kitchen glaring at the vertical supports I’d mis-cut for an unspecified amount of time. Long enough that I think I formed a new wrinkle between my eyebrows.

At that point I was like, listen, you can either keep at this right now and either it’s going to work and you’re going to be elated OR you’re going to end up in tears. So… maybe go have a beer?

Yeah. Beer was the right choice.

So it took another day until I finally got here: 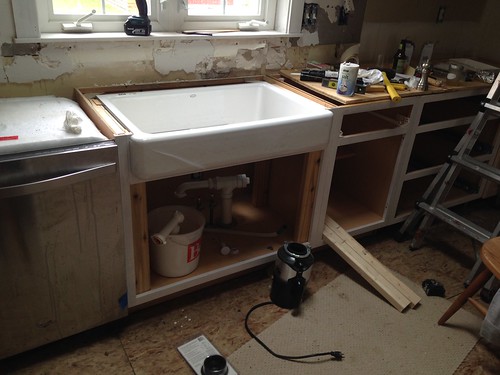 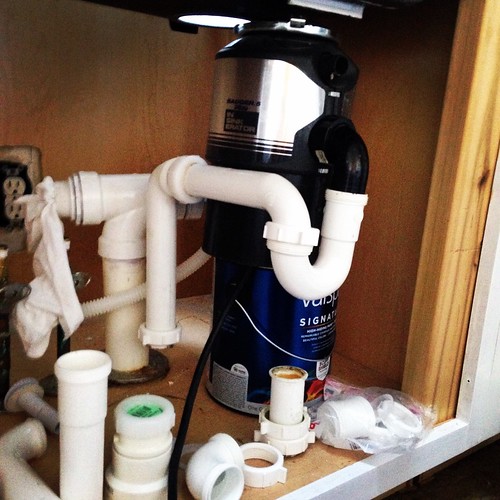 I can’t tell if the DIY gods were smiling down upon this part of the project or laughing in my face, because there’s no way I expected this to work without moving that PVC drain pipe coming up out of the bottom of the cabinet (which, no, you don’t see that every day) but in the end– and with the help of a sawsall, and several glasses of wine– it did… 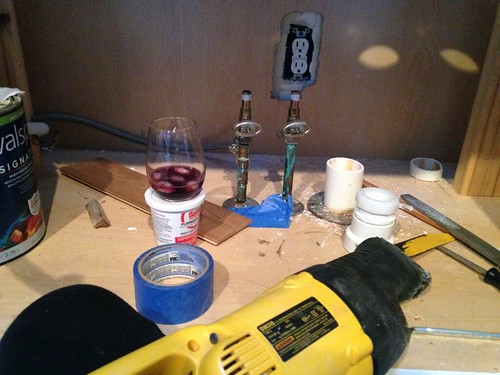 (You had to know that wasn’t the end of the story, right?)

All I needed to do was open these two new jars of primer and pvc cement to get the pipes in place. That’s it. 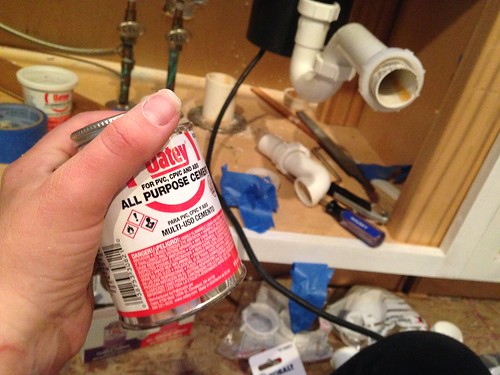 AND FOR THE EFFING LIFE OF ME I COULD NOT GET THEM OPEN.

Listen, I know all the tricks. I used a pipe wrench. I tried tapping the lid. I tried soaking the lid under hot water. I tried prying the lid off. I bruised the palm of my hand beyond belief… 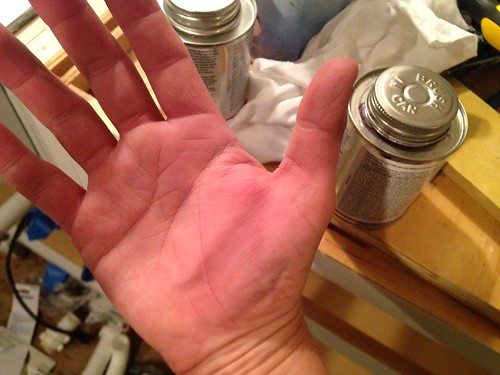 And then I was like OH HELL NO, I am not going another day without a working kitchen sink because of some stupid defective lids. 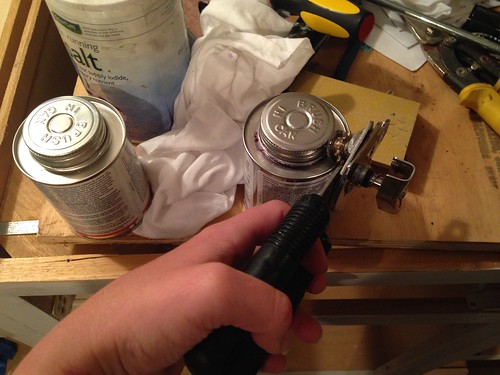 So I cut them off.

This is a theory I might adopt universally for things that are giving me problems… Just saying. 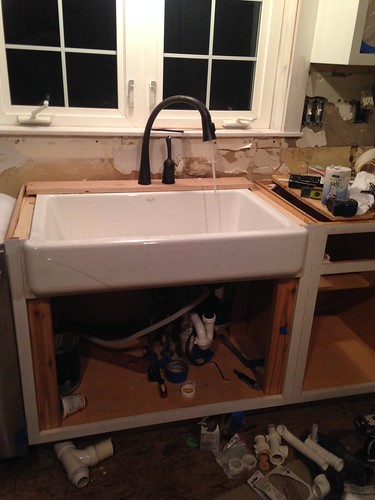 And here’s the thing… I LOVE THAT SINK. It’s my favorite thing in the kitchen–both the way it looks and the fact that it’s huge and I can pile a ton of stuff in it. Up until this point I was mostly just resigned about spending the money for it, but, actually, it’s only been in a week and I’d already say it’s worth every penny. Go figure.

Plus, over the weekend I got 2 steps closer to having a functional (but definitely unfinished) kitchen again, by starting to get some dishes out of boxes and back up in the cabinets… 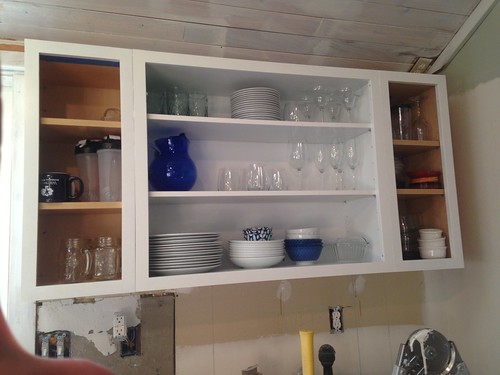 And by cutting some particle board to act as temporary counters (since I haven’t even started the decision-making or purchasing process for those yet.) 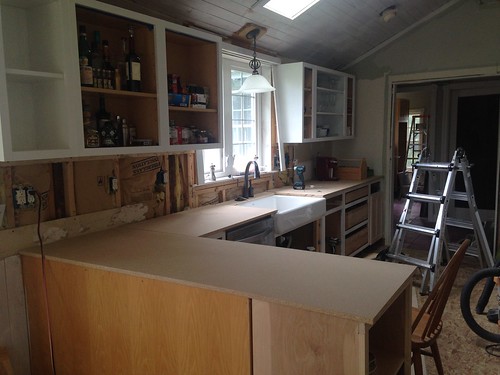 LOOK AT ALL THAT COUNTER SPACE. Such an improvement from the original layout…

Once I get the range and new hood installed things are going to slow down in here (I can already feel the garden pulling my attention away) but I’m determined to keep making at least small progress every week until the kitchen is done.

PrevPreviousKitchen Update: The Part Where It Starts to Get… Better?
NextAdventures in Beekeeping: Year Two BeginsNext