I’ve been posting about a lot of smaller, fun projects lately, but rest assured most of my focus (and anxiety) is still centered around the kitchen remodel. 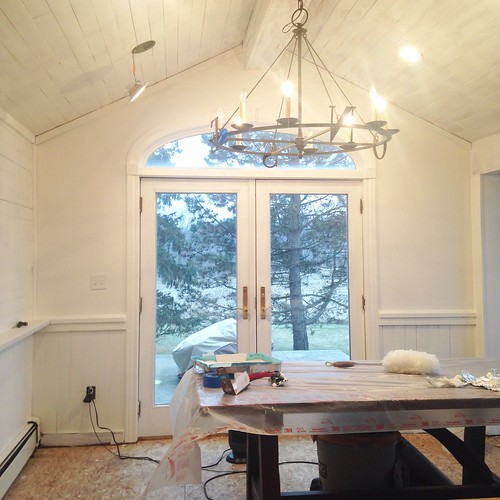 It’s actually more like three coats of paint, but the number of hours I’ve spent up on a ladder with a 3″ brush trying to get paint in every single seam between boards makes it feel more like five thousand. We actually spent 8 hours painting on a Saturday and I still think we’re probably only half-way done.

I’d been going back and forth on potentially keeping some of the seams and knots unpainted to make the room look a little more rustic (kind of like the wood I put in this bathroom) but in the end it just ended up looking poorly painted instead of deliberately rustic, so now I’m going back and caulking a fair number of the wood seams to make them more uniform. (So, tack another 10 hours on to this project? Sure, no problem.) 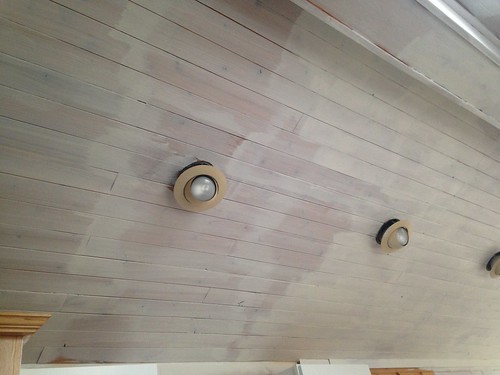 Still, it’s looking better every day. I’d been hoping to finish all of the painting before the counters came in, but things weren’t working in my favor last week. The good news? 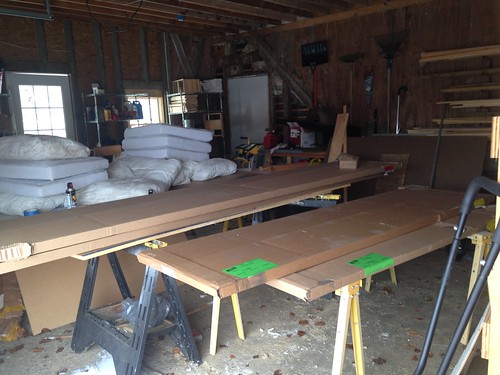 I am now in possession 38 linear feet of walnut butcher block.

The bad news? It’s still in my garage, not in my kitchen.

I would say that my general level of anxiety is hovering around a 6 all of the time these days, but mention cutting into that butcher block and it shoots to an 11. I mean, I know what my strengths are (uh, drinking wine and building shit on the fly?) which is basically the opposite of the “measure twice cut once” kind of building that is necessary for installing these counters correctly. So, for the sake of my blood pressure, I would like to get these things damn things assembled and in place as soon as possible. Well… as soon as possible after the $100 of new router bits and saw blades I just stress-bought through Amazon show up at my door. Obviously.

In the meantime, I’ve been scouring old contractor forums at night until I can’t keep my eyes open for every possible trick of the trade about how to avoid tearout from the sawblade, and the best way to to create a router pattern to cut the sink hole.

It turns out there is not a lot of great info from experienced builders on cutting butcher block out there on the internet. (But shit if there aren’t a lot of people who’ve created clickbait “How to Cut Butcher Block” posts with no actual useful information in them though… I love that DIY blogging is a thing, but c’mon guys. I very rarely have to google house or tool related things these days, so I didn’t realize just how much not-great info is out there now. I don’t know if people just don’t realize it’s not at all helpful, or if they don’t care as long as it gets them a good google ranking, but it sure is disappointing.)

Anyway, this has been the most useful forum I’ve found so far, and I spend a good hour in bed every night planning out the exact sequence to attempt practice and final cuts on my boards so that I’ll have a couple of “second chances” if necessary. Instead of, you know, sleeping.

I’m not even sure why I’ve mentally turned this into such a big deal. I mean the butcher block cost me a third of what granite would have, and I can always just get a new piece if I need to, and turn the rest into cutting boards… right?

Right. Okay, now I need to get back to my new hobbies of painting and obsessing over router bits. Wish me luck!