Back to Farm Work and Hard Shit

After two incredibly exhausting weekends installing the new kitchen counters, and the subsequent recovery from that adventure, I finally had to pick myself up off the floor and get back to the day-to-day projects around the farm. First and foremost on that list was building a new roost in the chicken coop. 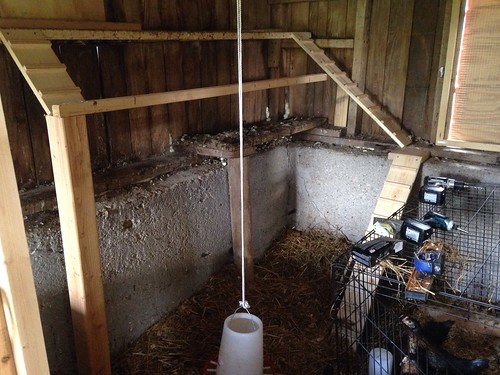 The coop already has two roosts in it and, even with the recent addition of seven full-grown chickens to my flock, that’s more than enough space for all of my birds and then some. But, even though the new chickens have adjusted to free-ranging on the farm fairly well, only a couple of them sleep up on the roosts… the rest pile into the nesting boxes at night, inevitably pooping all over everything in there, which means much more frequent coop-cleanings, and very dirty eggs that need to be washed all the time. 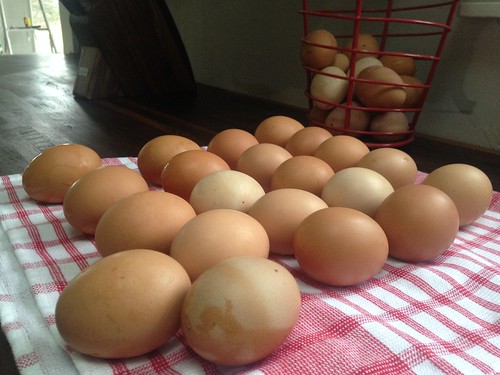 Here’s something you might not know: for the most part a freshly-laid egg is perfectly clean. Not only that, but a fresh, unwashed egg has a natural protective coating on it called the “bloom” which keeps air and bacteria out of the egg. If you don’t wash a fresh egg, you can store it at room temperature for at least a month, but once you rinse or wash an egg and that coating is gone, you need to store it in the refrigerator.

Also, another interesting egg side note: Most eggs you buy in the grocery store are at least a month old, and possibly older. If you want to know exactly when your eggs were packaged, every carton has a three-digit number on it, which corresponds to the Julian date on the calendar (i.e. January 1 = 001, December 31= 365.) The day this post will be published, March 1, is 060 on the Julian calendar for this year… you can find a chart of Julian dates here. So if you see the number 045 on your egg carton, that means the eggs were packaged on February 14th. (It does not necessarily mean the egg was laid on that date though, so you could factor in a few more days for that.) You can find more info on determining how fresh your store-bought eggs are here.

Anyway, this is what typical egg storage looks like at my house… 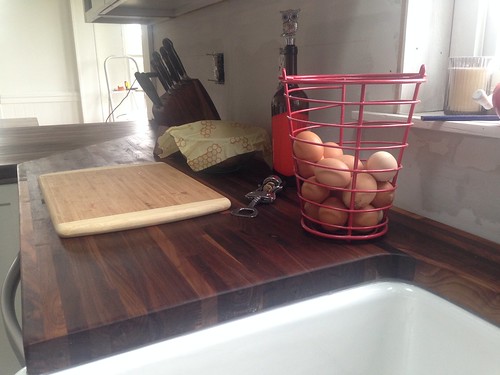 And when the basket gets too full I put a dozen or two into cartons and hand them off to friends and family.

This system only works when the eggs are relatively clean though, and having 2-3 chickens crammed into each nesting box all night was contributing to a very different egg situation. Like, I’m pretty desensitized to all kinds of animal shit at this point, but even I still don’t want a basket of eggs covered in chicken poop sitting out on my kitchen counter all the time.

My big plan to address this was to build yet another roost in the coop, because while new chickens and my original flock are getting along fairly well (i.e. no one has been mauled), the newer Nugs definitely steer clear of the older ones most of the time. I thought this might be why they haven’t started sleeping up on the existing roosts– the older chickens definitely peck at them if they get up there– so I did what any girl with a bunch of scrap wood does when she doesn’t want to spend the rest of eternity washing eggs… 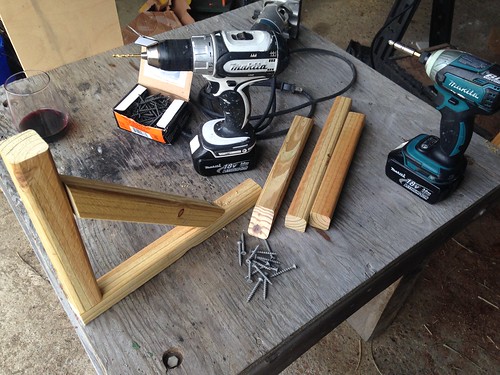 I built a new roost (and chicken-ladder) on the opposite side of the coop. 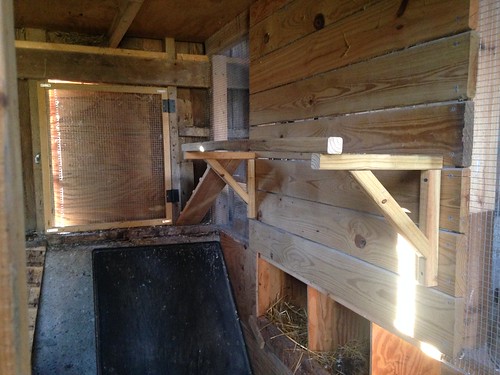 Didn’t take very long, and the new chickens will mostly consent to sleeping up there, but only if I physically pick them up out of the nesting boxes and set them on the new roost every night. 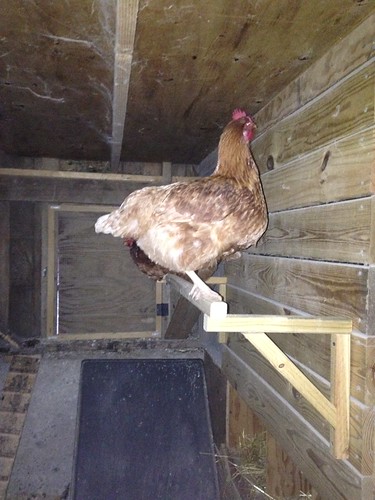 It’s a part of our daily routine now. Because, chickens.

But the good news is that an hour of my time and a little scrap wood is all it cost me to go back to getting clean eggs every day, and that wasn’t a very steep price to pay.

A big part of me just wants to end the story here, on a happy note with 13 healthy chickens that are settling into one big happy flock together… This is where the first draft of this post ended when I wrote if a few days ago, and at the time I thought it would just be a fun little update on the new chickens and life around the farm.

And then, of course, as often happens with life on the farm, things will be going so well one day and the next you’ll get a painful reminder of just how unforgiving the whole “circle of life” can be.

I do my best to tell an authentic story– not to gloss over the difficult things– but I also want to balance that with not making a huge deal out of something that’s a normal part of life (especially on a farm.) Truth: Sometimes I lose chickens. I don’t always talk about it.

I’ve had a free-ranging flock for almost four years, and in that time I’ve lost six chickens. The first was to a natural predator of some kind (which I wrote about here) and one was to a dog that someone was walking down my road without a leash. The other four were actually lost to cars (which does piss me off… on one hand, I get that the birds sometimes go in the road which is definitely on me for letting them free-range, but, on the other hand, I live on a small, infrequently traveled dirt road. It’s not that hard to slow down for half a second so the chickens can get out of the way of your car.)

Every time I’ve lost a chicken to a car I wrestle with whether or not I should just keep them locked up in a coop or run all day instead of letting them free-range, and that’s a topic that could take up a whole post in and of itself. Suffice it to say, even with the risk of losing a chicken to a car occasionally, I still feel that free-ranging provides a much better quality of life for my flock and better eggs for me.

(Also, my mom and I devised a plan this year to put up a low chicken-wire fence near the road and plant bushes that will eventually grow into a hedge, encouraging the birds to stay in my yard while still letting them free-range, which will hopefully solve the car problem.)

For the most part, that’s been my chicken experience… the biggest threats around here are cars and an occasional dog. (I’ve also lost several guineas to a red-tailed hawk that lives in the area, but the guineas are much more wild birds than a real part of the farm and I don’t mind a little population control where they’re concerned. The 11 guineas I have right now– and the racket they constantly make– is more than enough.) Overall, between the donkeys and the way my property is laid out, natural predators haven’t really been a problem for the chickens.

That is, until this week. When I went out to lock the coop up late Monday afternoon I noticed an unusually large pile of feathers in the barn, which, in my experience, is always a bad sign. I did a quick check and two of the new chickens were missing. After following a trail of feathers across the street I found one chicken dead in the side of my neighbors yard, a fair distance away from the barn, and second chicken was still missing even after hours of searching.

This is weird for so many reasons. First, it indicates that a predator of some kind walked right into my barn and attacked one or two chickens in broad daylight. Second, most predators won’t leave the body of a chicken lying around, much less leave it 50 yards from the place they attacked it. (I mean, usually the point is to take the bird and eat it.)  And then, of course, what happened to the second chicken? I’d hoped the second one was hiding somewhere and spent hours searching for her to no avail and haven’t seen her since.

My best guess is that this was either a raccoon (although it was really early in the day for a raccoon to be out) or a coyote (same… far to early in the day for them to be active) or, possibly, a stray dog or one that was off the leash (although it was a really crappy day out… I’d be shocked if someone was walking a dog at that time.) None of the explanations make a ton of sense, but I’m definitely leaning towards having some kind of surveillance on the property at this point. It’ won’t stop me from losing animals, but at least I’ll know what happened.

Anyway, there’s no happy ending to this part of the story. No big moral to the tale, or lesson learned for next time. Sometimes you lose animals on a farm, and it sucks. Farm life is not always idyllic. It’s not all sunsets and donkey hugs, and building cool shit. There are so many rewards (for me at least) but there’s a price as well. And on the days when you’re exhausted, and feel liked you should have done something different, or didn’t do enough, that price can seem extraordinarily high. It did for me this week. But I know too that there will be days– perfect days– that make it all worth it. And the best I can do at times like this is to remind myself that that’s what I’m working towards.

It’s hard shit, but life does go on.