A New Couch (and Other Things That Don’t Suck)

I’m currently trying to dig myself out from under the overwhelming amount of day-job and farm-related work that March continued to pile on–relentlessly and with no regard for my sanity–right up until the very last day. I’m convinced that in the future, when I look back on 2017, it will be known as That Year That March Was a Complete and Utter Bitch, (although I don’t want to tempt April or May to try to outdo her… I’m resilient, but even I have limits.)

I have so many things to talk about: kitchen updates, chicken updates, greenhouse updates, how-many-flat-tires-I’ve-had-in-the-last-week updates. But I don’t seem to get very far into writing those posts… I like to tell an authentic story, but sometimes you need just a little bit of distance to talk about things that are stressing you out.

So, instead, here’s something that turned out awesome… I bought a couch. 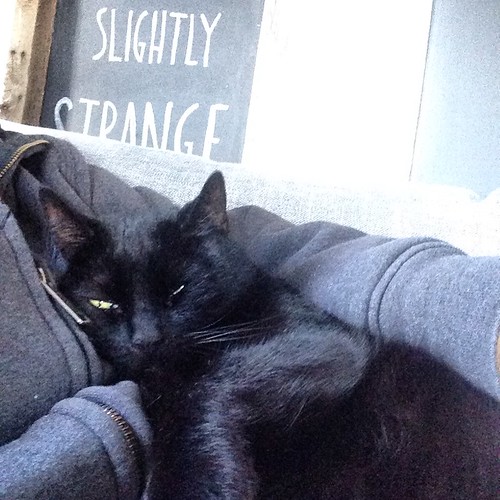 That’s me and the cat, lounging on said couch. We may be slightly strange (as the chalkboard says) but we don’t hate it.

You may remember that buying a couch was no small point of anxiety for me a month ago. (On one hand, kind of laughable that a couch would stress me out now that I have a crushed greenhouse and dead chickens to deal with… on the other hand? Couches are damn expensive.)

So I enlisted one of my friends (and awesome designer) to help put together the new plan for my living room. This was the floorplan: 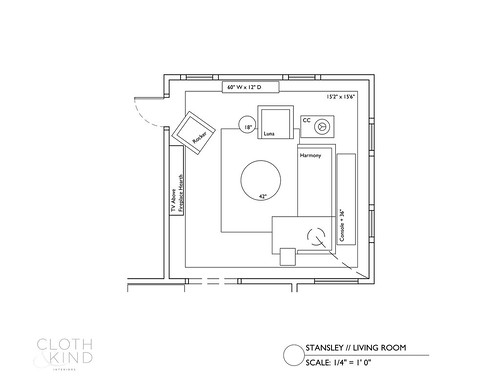 And the general “feel” we were going for: 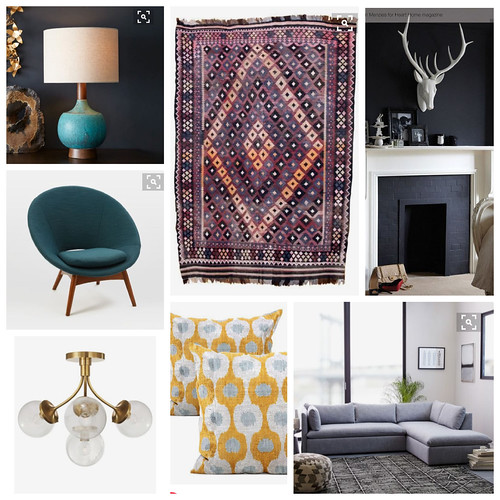 There are a lot of proposed changes in the plan. Not only a new couch, but a couple of new chairs, some rugs, a new coffee table, a longer console table, and much larger bookshelf.

I expect it will take some time for the full plan to come to fruition, so I decided to tackle the room in phases. The first was to take this… 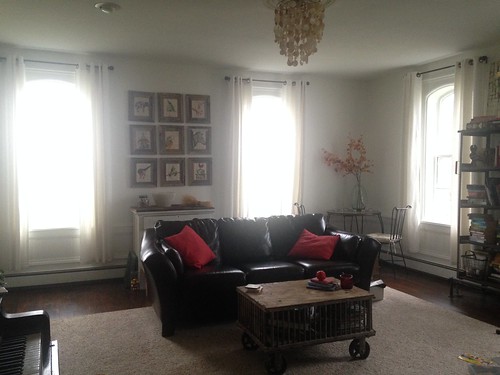 And add a little paint, a new rug, plus the couch, and new chair, and then rearrange the rest of what I already had in the room… 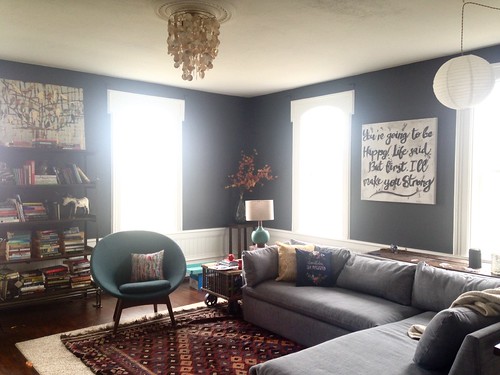 First of all, it’s already amazing and I love it. The couch is great, I love the dark walls, and the layout is fantastic. I can’t even tell you what it’s like to have a room in this house that you just want to go hang out in because it’s comfy and a little cozy, and there are real places to sit. (Pretty sure I haven’t had that in any of my houses, ever.)

However, out of respect for my designers I need to say that this plan isn’t exactly what they envisioned (yet.)

First, the plan calls for a much larger natural fiber rug to go under the new, patterned purple rug. I haven’t had a ton of luck with my rug guy and haven’t been highly motivated to track him down, so I just left the old one underneath the new one for some padding for now and it looks a little ridiculous, but we’re going with it.

Second, I’ve got a new light fixture coming for this room but it’s not expected to get in for another 3-4 weeks. I think it will look a lot better than the old capiz shade I have over that one lonely bulb right now. (See mood board above.)

Third, I have a lot of things to build for this room (eventually.)

Not to mention the other things the plan calls for like a large bookshelf (more room for books! yes!) another chair, and fixing my whole tv-on-top-of-the-fireplace situation. However, all of those are the kind of fun projects I’ll only tackle when I’m not under the gun to do things like build a chicken run, or rebuild my greenhouse.

However, I did drink a bottle of wine one night and made that painting for the back wall, because it seemed like it needed something… 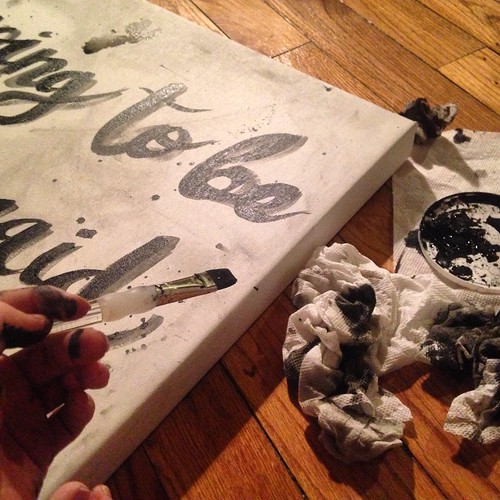 I completely love the idea of it, but not sure I love the actual execution and how it looks in this room. 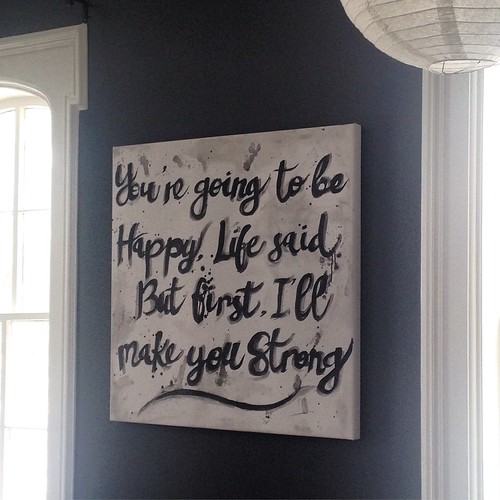 Although I will say, Life is certainly living up on its promise to make me strong of late. So maybe not a bad reminder to have around.

I also made that paper-lantern light fixture at the encouragement of my designers. 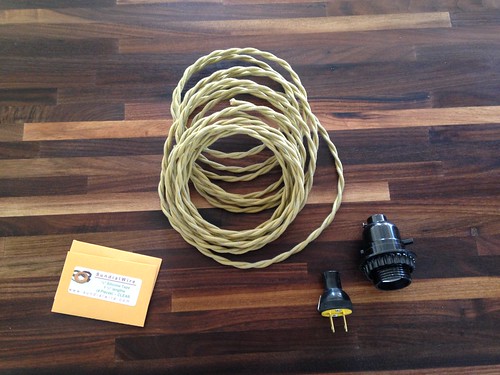 The braided wire is from Sundial wire (and you can find instructions on how to wire a light socket here, and a plug here.) Add a $2 paper lantern shade, and, voila, it was probably a $30 light fixture altogether.

Listen, at the end of the day, I’m not a design blogger. In 14 years I think I have maybe one legitimate after picture (this one)… it’s safe to say I’m more of a I-want-this-room-to-be-awesome-but-I-also-have-a-life-and-other-priorities blogger. Which is a little weird because for a long time (at the very beginning) I thought blogging was just about telling stories, and then I looked around me and realized everyone who writes about houses and DIY has after pictures.

You guys, I am officially 14 years behind on the “finished rooms” race, and I’ve got no intention of catching up. But I am super excited about my current, in-progress state of the living room, and what it might look like in the future. From day 1, this property has been a place full of projects, but after 5 years, I’m really excited for the house to also be a space where people feel comfortable coming inside, and sitting down to relax. I think the first version of my living room is a great place to start (just ask the cat.)