Remember how I was on a cabinet building kick a few months ago? 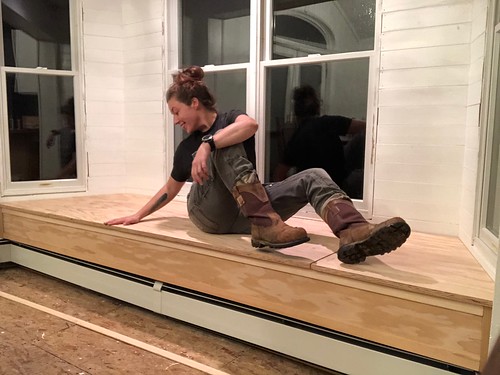 My energy level–and that magical ability to knock together a cabinet on a whim using nothing but some scrap wood and a bottle of wine–came to an abrupt halt at the end of January, because that’s the infuriating thing that happens when it’s legitimately negative forty degrees out. 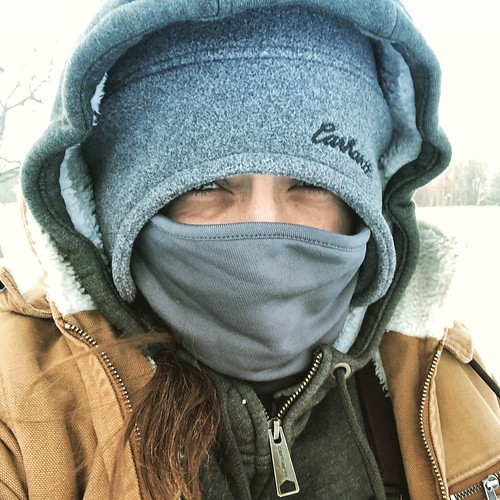 I mean… that sucked.

I wasn’t completely ready to give up on cabinets though, so over the last couple of months I have very slowly pieced together a couple of the built-ins for the Lake House. 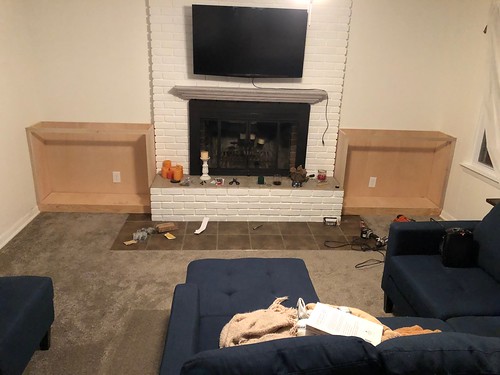 Which basically means that on the weekends my mom and I would sit in front of the heater in her living room for a few hours talking about how we didn’t have the energy to do any real work, and then eventually would open a bottle of wine, and the next thing you know… 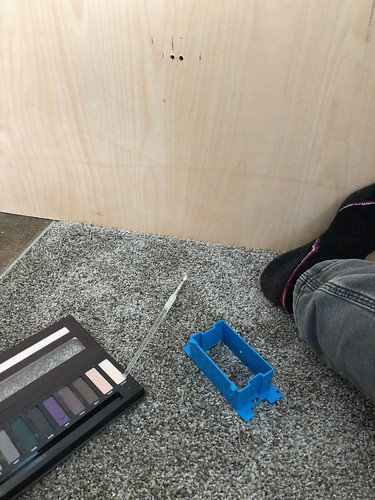 Yes, I own pretty much every tool known to man, and they are only an 18 second drive down the road, BUT WHY DON’T I JUST USE THIS EYE SHADOW TO MARK THE PLACEMENT OF THE OUTLET EXTENDERS INSTEAD.

Also doubles as a straight-edge when needed. Just saying. 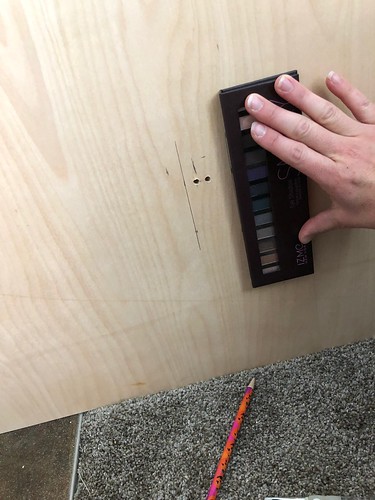 I have also, on more than one occasion, rigged up a “table” to cut wood on in my mom’s garage… 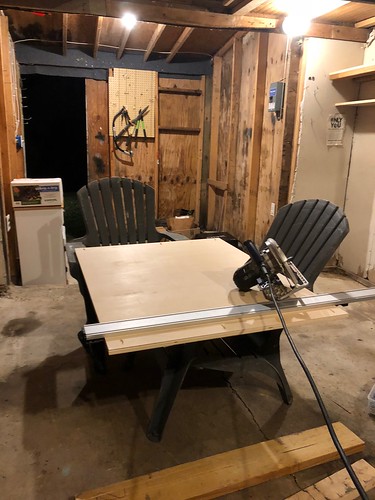 And, on one particularly chilly afternoon… 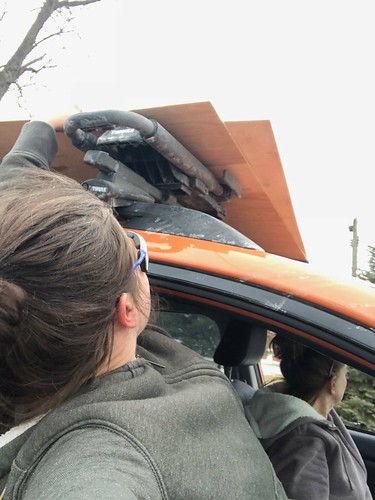 Hanging out of a window holding a couple of sheets of lauan on the roof of my car because the truck flat out refuses to start in -40. 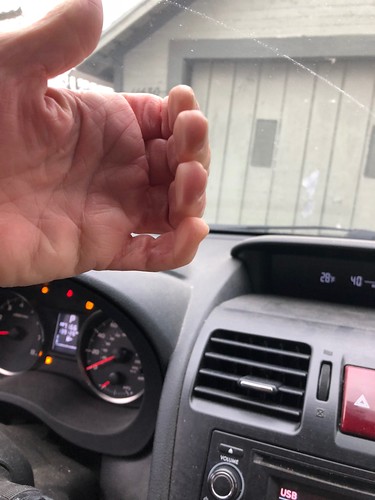 (Don’t worry, it totally thawed out.) 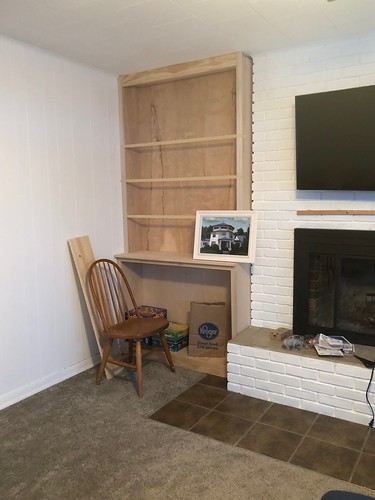 We did mostly build a thing!

(That is masking tape we were using to visualize shelf placement.)

They’re still in-progress, but the fact that we got anything done at all is a sign we didn’t completely give up this winter.

And now that we’re almost to April, the lake has gone from this… 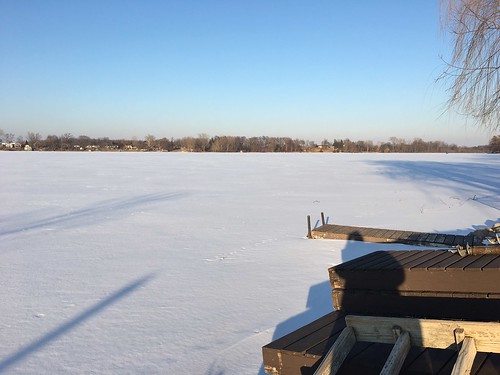 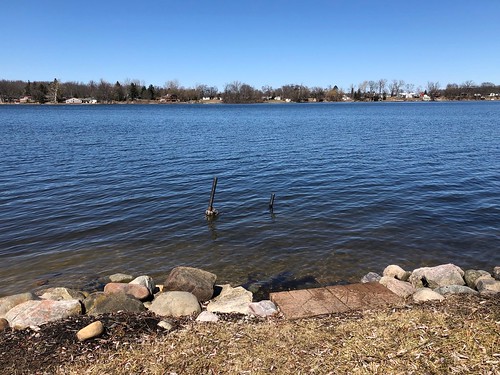 Literally over the course of a week.

The other interesting thing you might notice about that second picture is that THE DOCK IS GONE.

So, add that to the list of fun and exciting things we’re learning about lake life. One day your dock may just up and disappear.

To be clear, my mom’s amazing neighbors removed most of the dock sections in fall, and then I froze my knees off removing the final posts in November. Historically they leave that first section of dock in over winter and it’s fine, but not this year.

This year, I had to go on a dock hunt. In my kayak. Real life, you guys. 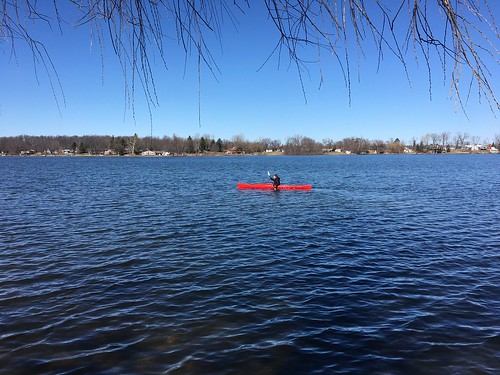 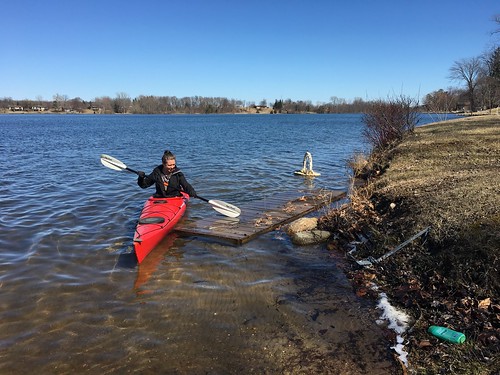 So, add “dock repair” to the list of things I’m going to learn to do this spring.

Other than finish the built-ins in the living room (and possibly adding some storage to the laundry room) our only other big Lake House project for the summer is this: 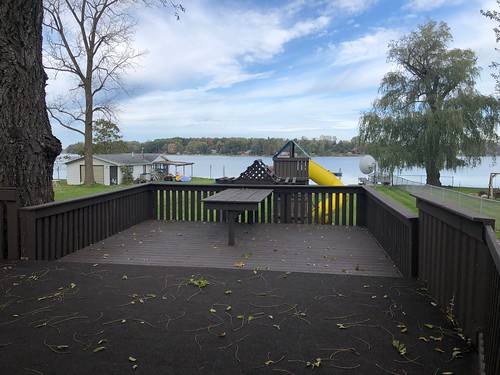 This deck is effing huge. More than 600 square feet. The foundation is solid, and the decking is so-so, but the railing and some of the stairs are in need of replacement sooner rather than later. Also, some of the deck had been covered with an outdoor carpet, which my ninety-two year old grandma decided HAD TO GO last weekend, so she just started pulling it up herself. 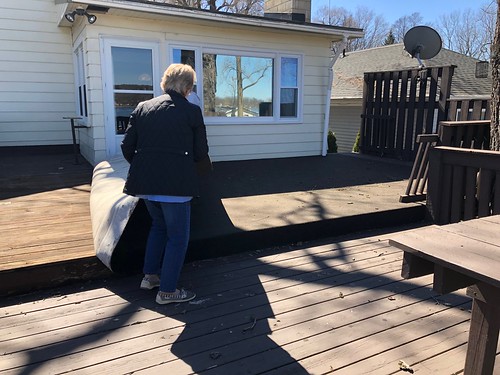 And then I was like, “Well if Mamie is going to pull up the carpet, I’m taking the built-in picnic table out!” 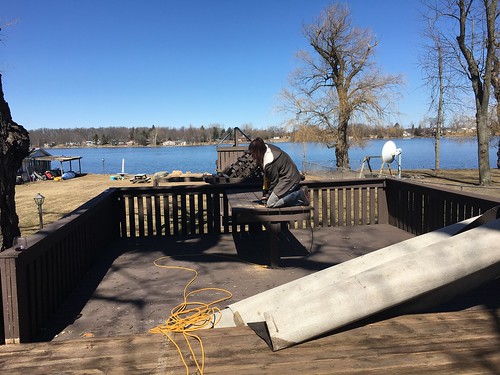 That is totally an OSHA approved way to demo something, by the way. You should definitely be kneeling on top of a table with questionable structural integrity WHILE YOU ARE DEMOLISHING IT. With a sawzall. 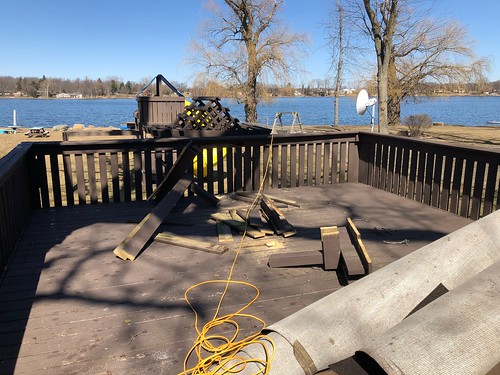 (OR maybe literally never do any of the shit you see me do on this website because you will definitely lose a finger and/or die and everyone you know will be like WHY THE HELL DID YOU THINK THAT WAS A GOOD IDEA, and I will not be held responsible for that shit. Your call.)

Anyway, we also took down this little arbor because it was half-falling down already… 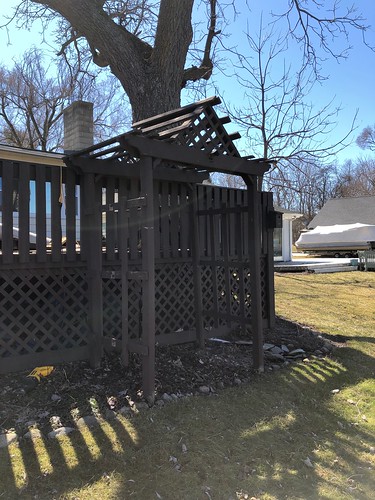 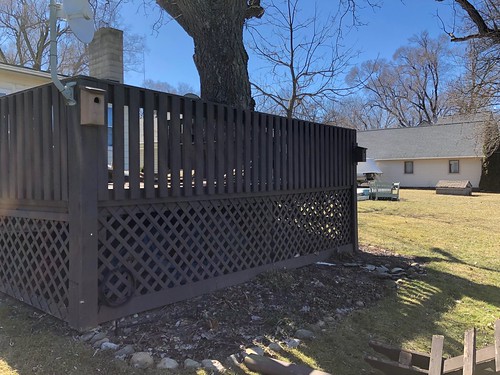 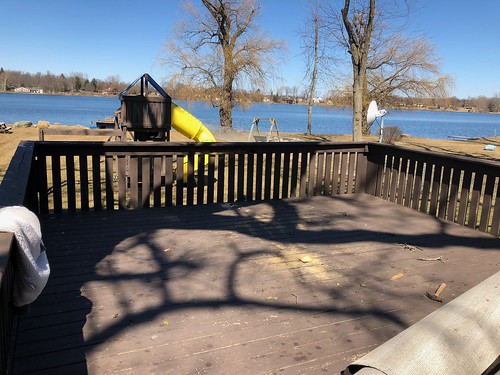 But the real reason we’ve started demoing that side of the deck is because we’re seriously considering opening it up and putting in stairs that go straight out to the water. Something like this… 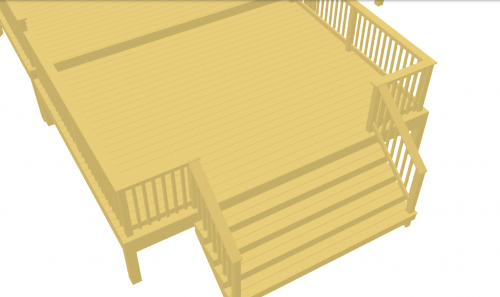 We’re still thinking through the furniture plan for that space, so we’ll see where we end up.

Here’s how our complete spring/summer 2019 list is looking for the Lake House:

Or, you know, maybe I’ll just spend all my time kayaking instead. 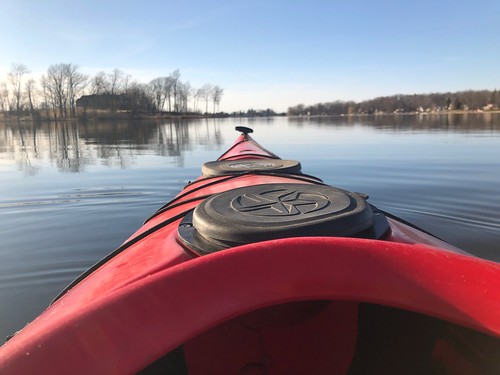