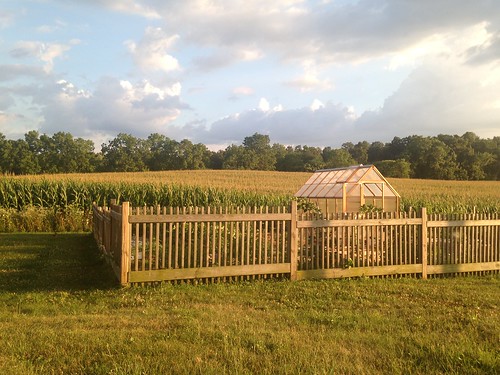 I’m not sure if I’ve had a single project on the farm that has brought me such varying levels of joy, frustration, and what the actual fuck. 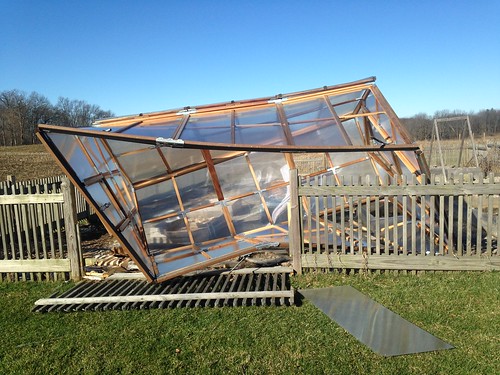 (That was the “what the actual fuck” part, in case that was unclear.)

The abbreviated version of the greenhouse saga is this: I spent four years dreaming about putting a greenhouse up in my garden, but it never made it quite high enough on my priority list until 2016 when I finally bit the bullet and ordered a kit greenhouse (from here.)

I also fucked up– big time– by using some rebar ties to secure the greenhouse to the ground instead of putting in a legit foundation. In early 2017 I paid the price for that mistake, and the broken pieces of my greenhouse have been stacked haphazardly in my barn ever since.

In fall of 2017 I did what I should have done to start and put a legit foundation in. (By “legit foundation”  I mean, 6 concrete piers set four-feet in the ground… there’s 960lbs of concrete for the rebuilt greenhouse to set on.) 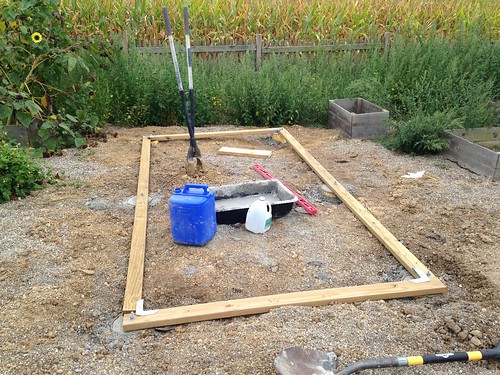 I tied a sill plate down to the piers, and all that was left was to repair all the greenhouse pieces and reassemble them.

I continued to put that part off for another year an a half because I guess I liked the sense of guilt and frustration I felt every time I walked into the barn and saw the broken greenhouse pieces lying around?

But finally, finally, six weeks ago I started the arduous task of disassembling, fixing, and reassembling all the greenhouse pieces. 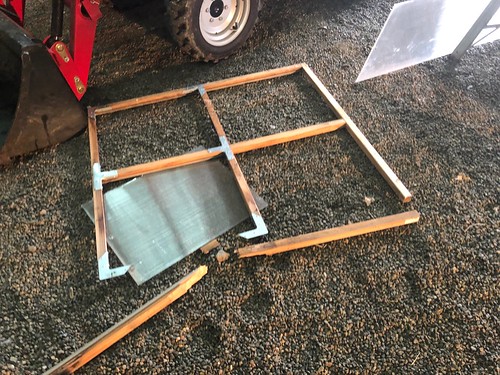 The smartest thing I’ve done in a while is to just plan for a whole afternoon of set-up without the expectation that I would actually start working on the greenhouse panels at all.

Then, once everything was ready to go, I basically set up a triage center for the panels. Panels that needed to be washed went outside in the rain (smart, right?), panels that just needed the poly-carbonate re-installed went in one pile, panels that needed new wood framing went into another. 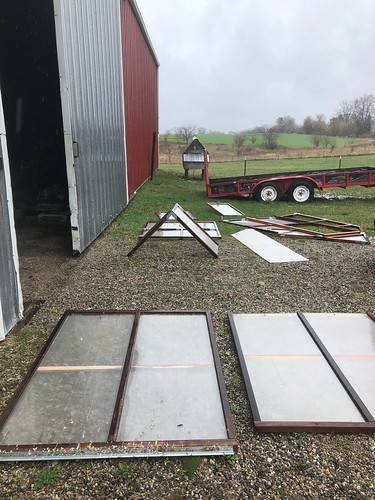 And then I got to work. 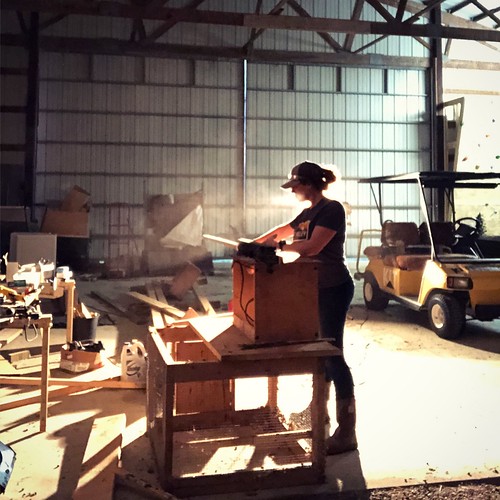 It took two full weekends (with the help of my mom, and some wine, of course) to get the majority of the panels fixed. 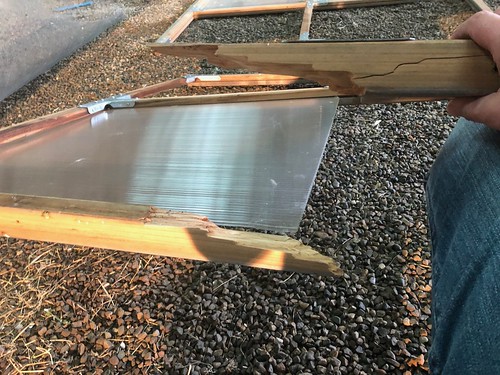 Making replacement parts out of cedar… (The original frame was redwood but that’s not readily available in these parts.) 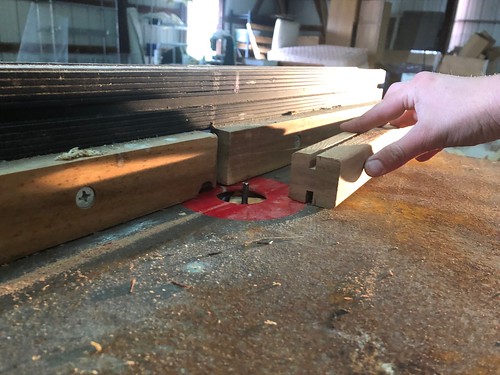 And then reassembly, which, if I’m going to be honest, was a complete bitch. Fitting the polycarbonate sheets back into the frames was not the most fun I’ve ever had in my life, but we got the job done… 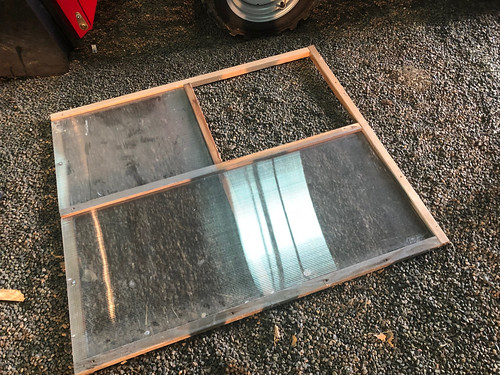 I also got really good at straightening out these metal brackets using a sledge. 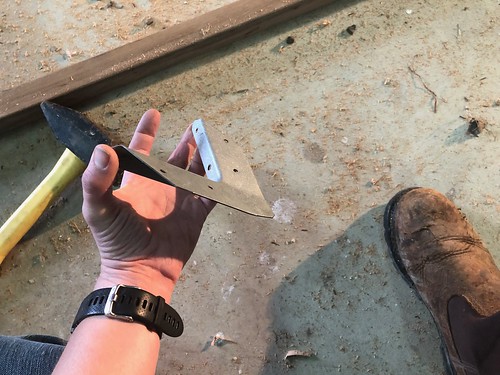 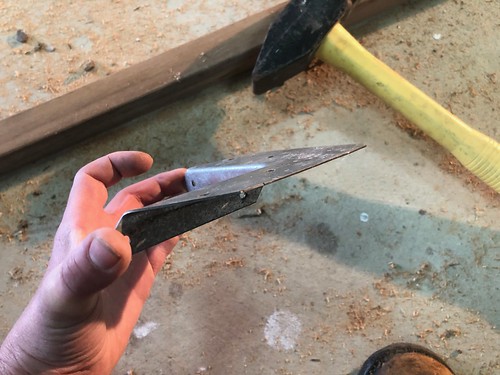 Then it took another weekend to clean, sand, and stain the frames, as well as fixing/piecing together miscellaneous parts. 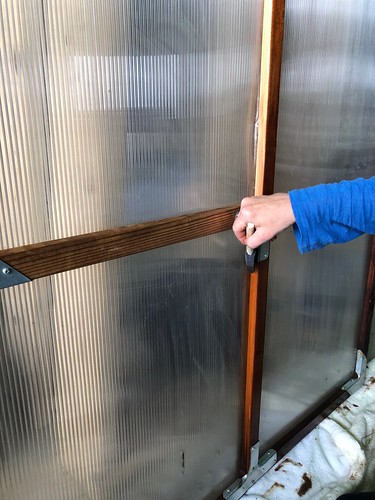 Some of the brackets had to be bent to very specific angles, which means I got very specifically creative with my swearing. And my bracket-bending methods. 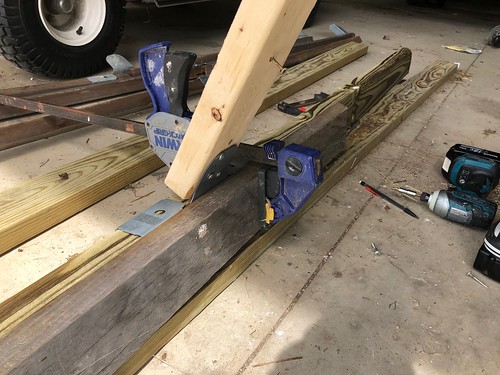 Finally, a month into this project, it was time for the moment of truth.

Here’s the thing, I did do the necessary math for setting the foundation and the new sill plate for this greenhouse, but I did it TWO years ago, and it has been outside in the elements ever since.  Then I cut all of the new base frame pieces that had to both be the exact size as the panels AND fit around the sill plate just last weekend. So. What are the chances all of those things tie nicely together?

In my world, basically zero. 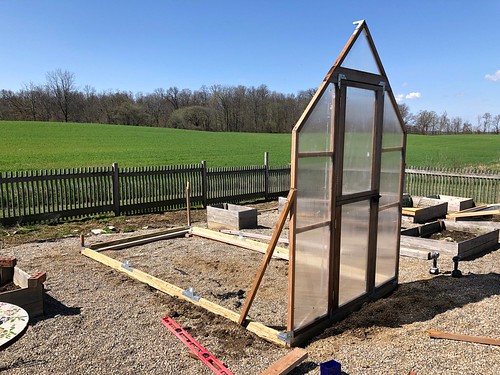 And yet. I have to give my 2017 brain credit, because that shit fit together without a hitch. 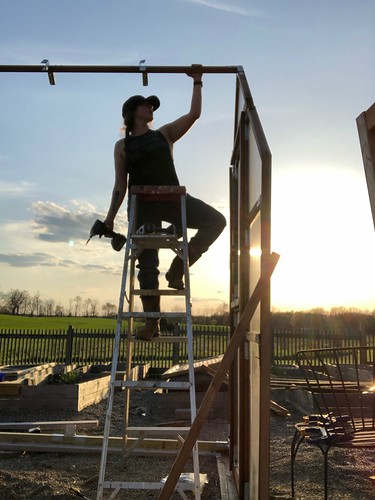 However, I added a LOT more fasteners to hold the panels to, well, everything.

It took about 4 evenings of assembly (rushing home after work and calling my mom over to help hold the roof panels in place), but… 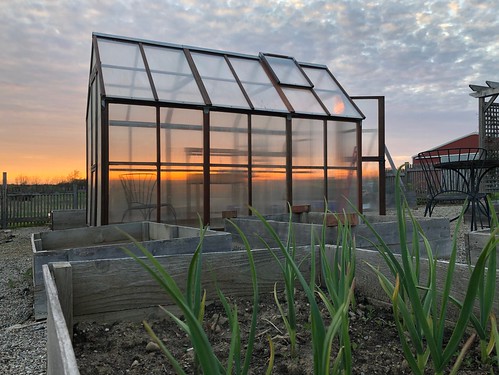 DONE. 100% rebuilt, with a thousand-pound foundation, which is about equivalent to the weight I feel has been lifted from my shoulders now that this thing is back up.

It’s only been up for a week, but there have been even more garden upgrades since then, and it’s pretty amazing that in March the garden looked like this… 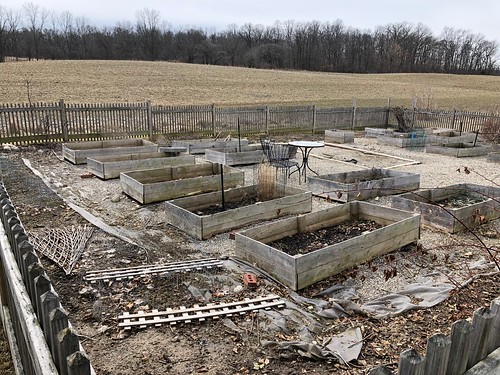 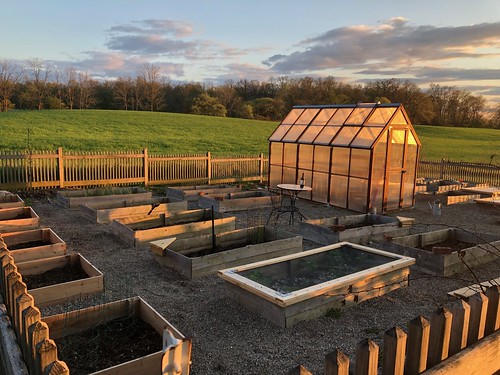 It’s going to be a good year for the garden, you guys.