Foundations are fun, I agree, and not just because 1.) you get to dig a bigass hole in the ground, and 2.) my family owns a foundation company. Actually, I retract that statement… those are the reasons why foundations are fun and if you want to know more about them check out DIY House Addition: Step 3 – Foundations.

Because frankly, we have more interesting things to discuss here. Like lumber! Framing nailers! And the point in time where the big hole in the ground starts to resemble and actual house! The mental exclamation points at that stage in the building process cannot be overstated. Okay. Enough of the excessive punctuation. Let’s talk about framing.

Framing: Not just for pictures.

Framing, in fact, does not exist for itself– and for laymen like us it’s best to remember that. Framing exists to hold up your siding. To give you something to nail your roof shingles to. To support your insulation. To keep up your drywall.

You have to think of it that way so that you understand why you don’t use 8′ studs (because with the top and bottom of a wall frame you’d have an 8’4″ wall height, which means a 4″ strip of drywall somewhere on your wall… and let me just say, been there, done that, tried to off myself by sticking my head in a five gallon bucket of joint compound before all was said and done). Or why you use at least three 2×4’s in every corner (you’ve got to have something to nail the drywall to from every angle.)

So here’s the real deal… unlike foundations–for which I strongly suggest you use a professional– framing is something you could DIY if you understand the codes, and have enough people to lift up the walls. But I would practice on something other than your house the first time around. Trust me, you will learn some things.

I’ll tell you this about our own house addition– I wanted to frame the house and was adamantly against hiring it out. I mean I don’t own a framing nailer for no reason, people. But. But with only two of us, and two full time jobs, and not enough time to get it framed and weather-tight for winter, we spent the money to hire a crew for the bulk of the framing for our addition. (The cost of labor for this was about 8% of our overall budget.)

What you need to know.

Whether or not you’re actually wielding the nailer, there are things you should know about the frame of your house, and they begin with this:

Let’s dive in, shall we?

Framing starts from the foundation up because of, duh, gravity, the Laws of Physics, all of those other things my Own Personal Engineer keeps trying to beat into my head.

Anchor Bolts – See the bolts sticking up out of the foundation? They keep your entire house from blowing away in a slight breeze. Don’t skip that step.

Technically they are part of the foundation. They should be at least 1/2″ in diameter, and spaced every 6′ and within 12″ of a corner or any door openings.*

Sill Plate- Generally 2×6 or 2×8 (pressure treated)- Lays flat on the foundation (with holes drilled for the anchor bolts to run through) and is attached with washers and nuts screwed into the anchor bolts.You may or may not have some sort of gasket under the sill plate– but you probably should.

Rim Joist – Runs around the perimeter of the sill plate. Your floor joists will be end nailed into the rim joist. We replaced a rotted one here.

Floor Joists – If you stand in an unfinished basement and look up, those pieces of wood running parallel to each other are the floor joists. They hold up your floor. Your floor joists rest on the sill plate and “dead end” into the rim joist at the end of the house. They also rest on your beams (which are usually directly under your load bearing walls). 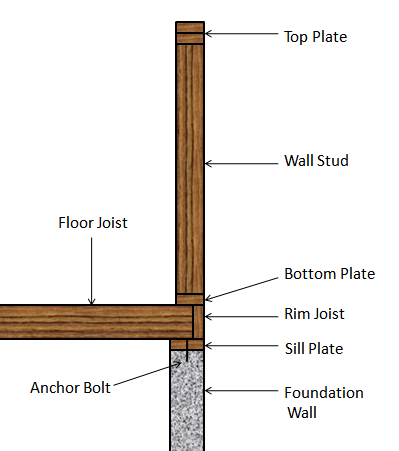 There… makes more sense that way, doesn’t it?

The diagram is a little misleading, and not just because I drew it out of scale in Powerpoint. More because some of these things will be offset to account for sheathing (5/8″ plywood that covers your house and floor). We’ll get to that in a minute though. Moving on…

Bottom Plate – The bottom of a “framed wall”. This is usually one 2×4 or 2×6. The wall studs are end nailed or toe nailed into the bottom plate.

Wall Studs – Again, 2×4 or 2×6 (2×6 walls are becoming more standard- especially for exterior walls) usually 16″ on center. These make up the “center” of a framed wall.

Top Plate – The top plate is made up of two pieces of wood and is the top of the framed wall.

Then we get into the exciting parts that make up the roof, like…

Roof Trusses- Roof trusses are a strange beast. You can buy them pre-fab (rafters, supports, and ceiling joists are all one piece) or build them on site. Here’s a traditional roof structure.

Sheathing – The whole house (and roof) should be sheathed in 5/8″ plywood or OSB. It comes in 4×8 sheets and they should be run horizontally in a “brickwork” pattern (staggered seams) for maximum stability.

And those are basically your pieces. Even if someone else is doing this for you, you should know what the pieces are and how they fit together.

First and foremost, your frame is just that – your frame. It determines the heights, widths, openings, and “squareness” of your house. (Is squareness a word? Probably not, but that’s why this is amateur-hour and not “ProfessionalBuilderDiva”. The opposite of crooked. How’s that?)  The important thing to note is that most of those things are regulated by building codes. Particularly (but not limited to):

Building codes also regulate, the types of materials you can use, how they have to be fastened to each other, where you can and absolutely cannot cut, notch, or drill holes in things, and almost anything else you can think of that would affect the structural integrity of your house.

You just know I rub my hands together and cackle a little when I say that. Here’s a suggested list:

I don’t know how you could not have had enough of this already, but let’s go into even greater detail, since we’re here anyway. Corners- It takes as many studs to do one corner as it does to do 2.5 lineal feet of straight wall. There are a couple of ways to do them. Remember, you’re going to need to nail sheathing to the outside and drywall to the inside, so you need to have a nailing face available on the inside and outside of the corner.

Doorways & Windows – There are even more fun terms for doors and windows.

Did you seriously just write 1800 words about framing a house after midnight? Yes. Yes I did.  We’re not all sawdust and donkeys around this place.

Now go forth and frame to your heart’s content… If that just wasn’t enough building information for you, check out the rest of the DIY House Addition series.

*As always, I speak in Michigan regulations (which are some of the most stringent in the country) because that’s where I went to contractors class and where we’re building our house.

PrevPreviousIt’s Not Easy
NextBecause there is *definitely* not enough going on around here.Next