So, I built a thing. Inside my actual house. This hasn’t happened recently because ever since the snow thawed (yeah, I’m still talking about The Snow four months later… it’s post-traumatic-winter-stress, okay?) I’ve exclusively been playing in the dirt and building things outside of my house. But, over the weekend, this happened: 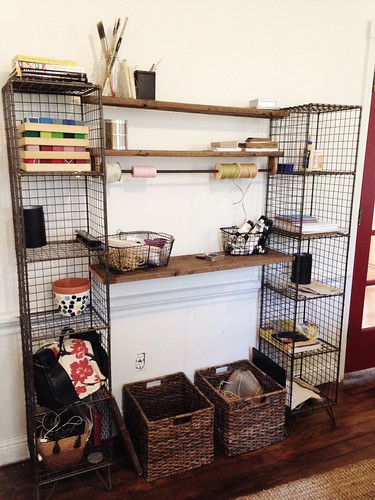 Since I embarked on my 10-day Get Your Shit Together mission two weeks ago, I was inspired to tackle a “quick, little project” in the house.

My office/indoor-workshop is probably the most finished and functional room in the house, but there was still this corner… 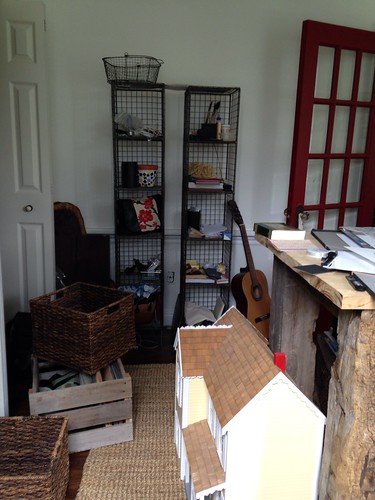 Which was basically… uh, not. Not finished. Not awesome. I’d been thinking of building some kind of wall organizer (like this) for some time, but I realized I have two perfectly good wire shelves here, and I couldn’t think of a good reason not to use these as the base for some additional organization.

My thought was to attach a few different shelves to these shelves and call it a day. (Cut and attach three boards… how hard can that be?)

So I found some old barn wood in my stash. 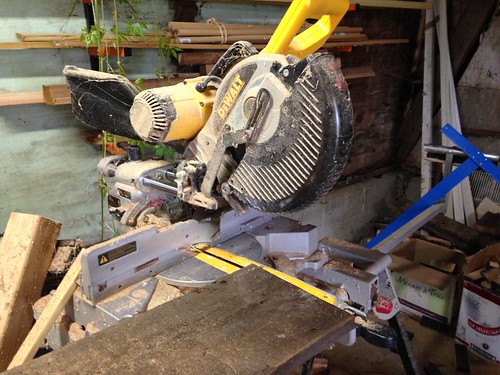 Cut one piece from a 10″ wide board, then cut a second piece that I ripped down on the table saw to make two additional 5″ wide boards. I sanded down the rough exterior on all of them, but left all the character of the old wood. (I’ve found 60 grit on my orbital to be the best way to do this, then I finish the boards with paste wax.) 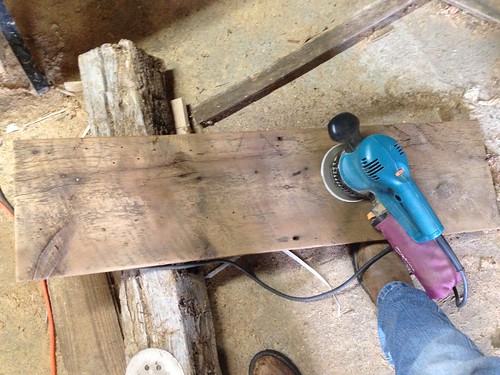 I decided the simplest solution to attaching these to the shelves would just be to cut notches in the ends of the boards so they would rest on the wires of the shelves. 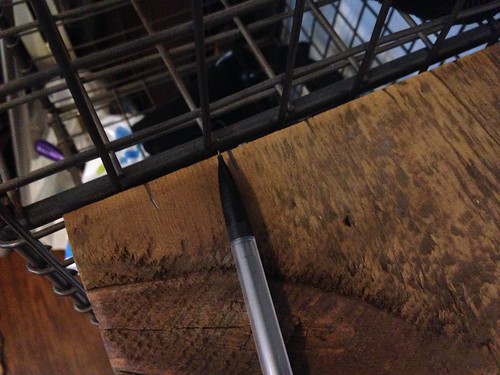 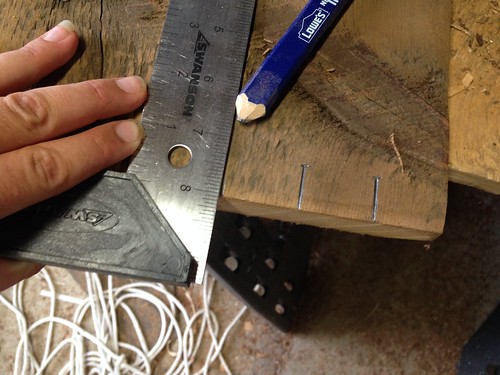 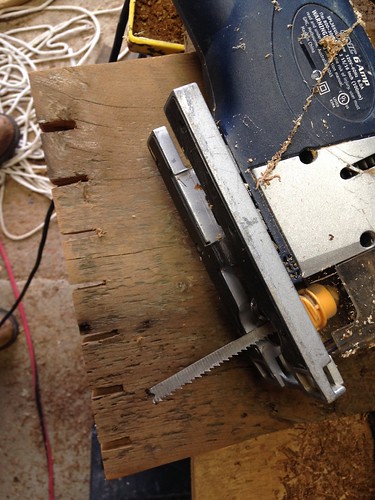 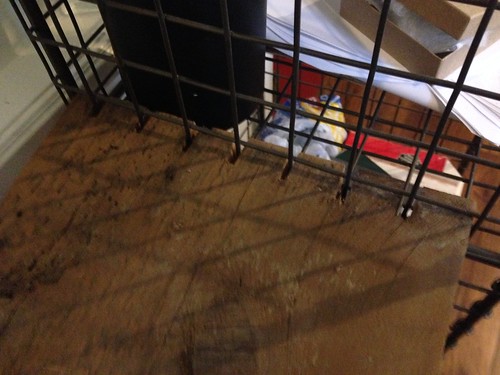 I also decided one of the upper shelves needed a ribbon holder. You know. For all my ribbons. (Okay, I don’t have that many ribbons, but you never know… I might one day.)

To make this part, I found a reasonably-sized piece of metal tubing around, and spray painted it to cover the rust.. 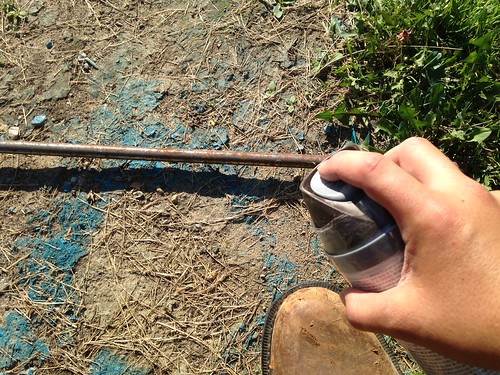 (I appreciate people who are like professional spray-painters of shit, and set everything up real nice. I rest my stuff on the grass and go for it. Patience is not one of my virtues.) 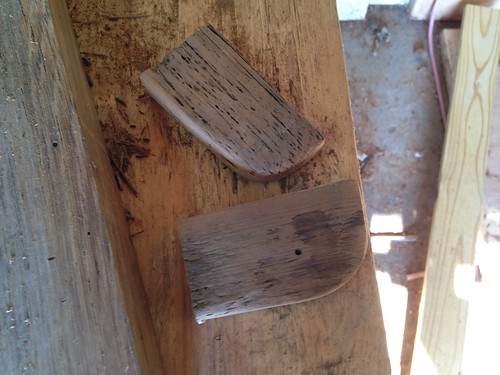 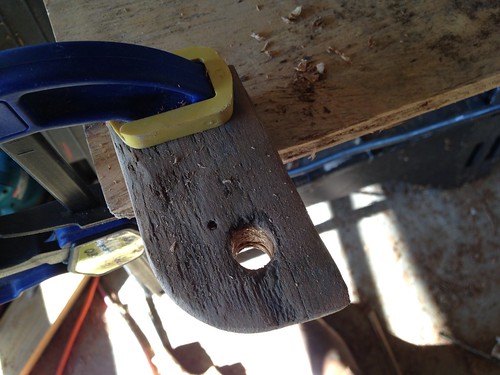 Speaking of attaching things… this was a little difficult with as a one-woman job. Particularly because it was about this time I realized that the wire shelves (purchased from CB2 a few years ago) are not actually identical. Which, I mean, duh. That’s obvious in retrospect. Less so when I was cutting things.

So there was some swearing and some shimming, but I managed to get things reasonably level for this… 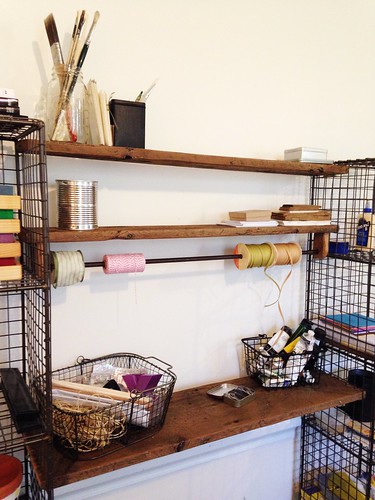 Edit: I may have given you the impression that I built this thing like a house of cards, ready to topple over at the slightest breeze. A couple of things to note: 1.) Those wire shelves are very heavy, and don’t move easily, even when bumped. 2.) I stuck a couple of screws through the end of the boards to “close” some of the teeth while I was putting things together… not the final solution (I’m looking for some metal strips to age for the ends of the boards) but the thing isn’t going to come apart unless I deliberately try to break it. And, 3.) The nature of the wire (which is not uniform) means that the shelves are pretty much wedged on here and would probably keep the whole thing together based on friction if nothing else. Now, I wouldn’t try to pick the whole thing up and move it as one piece, but short of that, I don’t have any concerns about it staying together.

With all said and done, it turns out I have a lot more storage space here than I thought… 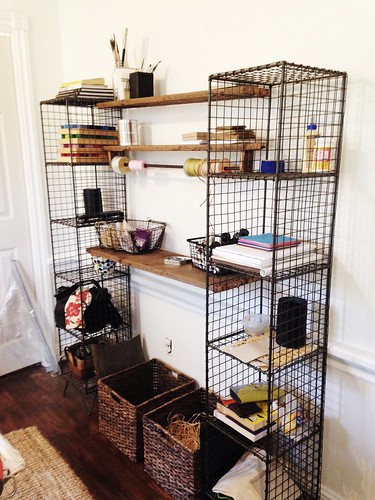 That’s the absolute weirdest part of organizing. It’s like magically creating space where I was one-hundred percent sure I couldn’t fit any more stuff.

This did help me clear a lot of “ongoing-but-currently-on-hold” projects of my workbench, which was huge.

Also huge? I wrangled my dude into helping me move this exceptionally heavy desk out of one of the office closets… 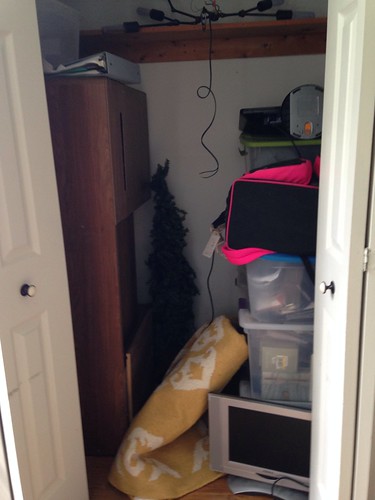 As always, the Nuggets helped… 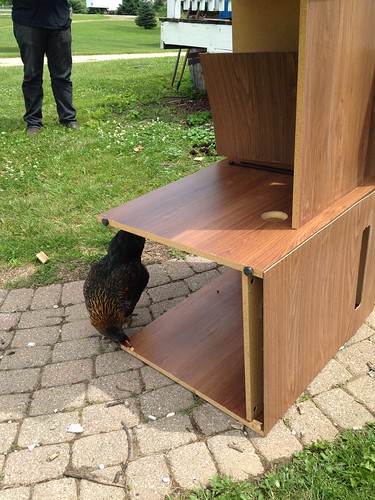 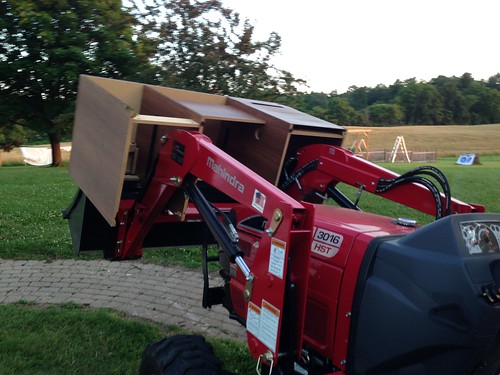 And that freed up a TON of closet space– and gave me somewhere to store my childhood dollhouse that my dad recently dumped on me. I don’t know what the hell to do with it, since I build actual people houses now. (Although if you want to see an amazing use of doll-house… The Bloggess wins the Internet with this one.

So, things are looking pretty good– but not finished– in the office. For a couple of pieces of scrap wood, and existing shelves, I’m glad I spent a little time on the problem-corner of this room. I might build something more substantial down the road but there are so many other projects to get to first.