Two Ladders, A Girl, and Her Tractor

If there was one unfinished thing on my list that was going to cause me some angst over the winter, it was this…

Six 6×6 poles set in the ground almost 6 months ago, ready to become my next badass (or, in this case, bigass) pergola project. Except I never got around to working on that damn thing over the summer, and I’ve been worried that if I didn’t put the crossbeams up the posts would warp over the winter.

(Trust me. Wood does that shit.)

But it got super cold, super fast, and I found myself unwilling to spend hours out in the freezing rain, wind, and snow to finish this thing up.

More than once I said, “if only I had just one more day were the temp was over 50…”

Well, I’d planned to spend my post-thanksgiving weekend huddled up in the house, getting things ready for Christmas. Except, as it turns out, the Sunday after Thanksgiving was fifty-eight degrees in Michigan.

Remember when it was eighteen degrees two weeks ago and I cracked a pane of glass out of one of my windows with my hard-ass head? Well. That’s Michigan for you.

But I asked for one more day of over-fifty weather, and since I had it, I damn well wasn’t going to waste it.

I also didn’t have any help on hand, so the question became, how am I going to level and install some 14-foot-long 2×8’s by myself?

I used the cheapest “laser level” known to man to help me set my “resting blocks” (just scrap wood screwed to the posts to act as another set of hands to hold the beams in place while I attached them to the posts.) 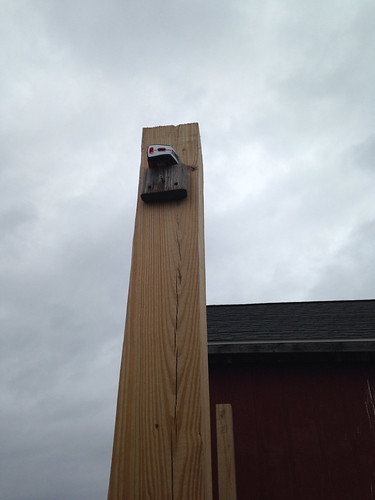 Then I got my tractor out and used it instead of sawhorses to hold the 2×8’s while I cut them down to size…. 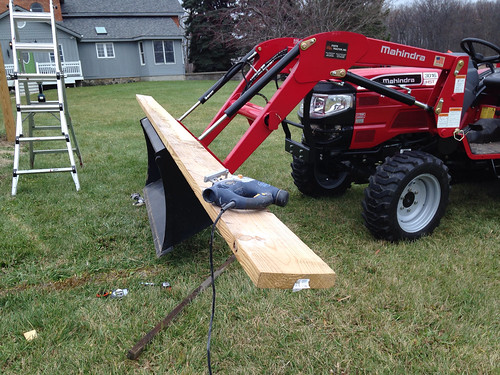 I also decided to put the decorative edge on them. I’ll have to take them down in spring to trim the top of the posts, but this will be one less thing to worry about, and helps me get a feel for how it will look. 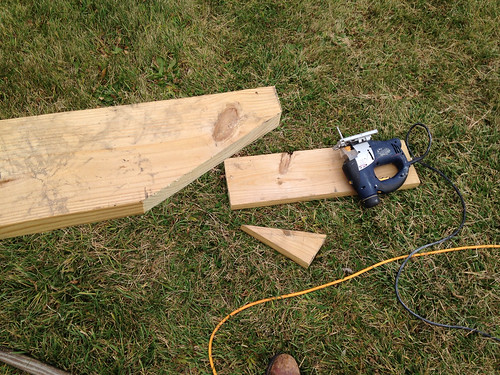 Getting the board up on the blocks so I could attach it to the posts was way easier than it probably should have been. I used the tractor to lift the boards up and then maneuvered it in to place using the sheer force of my stubbornness. 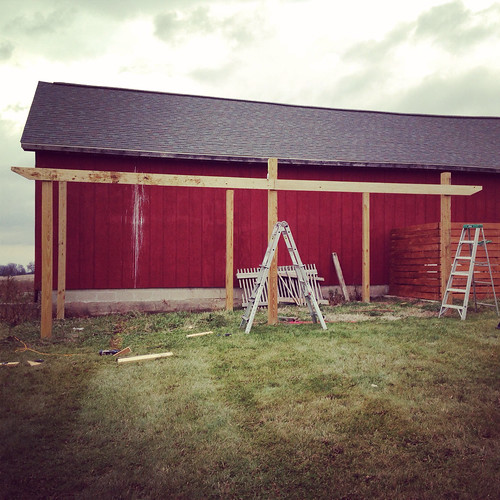 I had about 4 hours of daylight to get this job done, and I ran into a couple of snags–if you have sharp eyes, you might see one of them in the pic below– but, check it out… 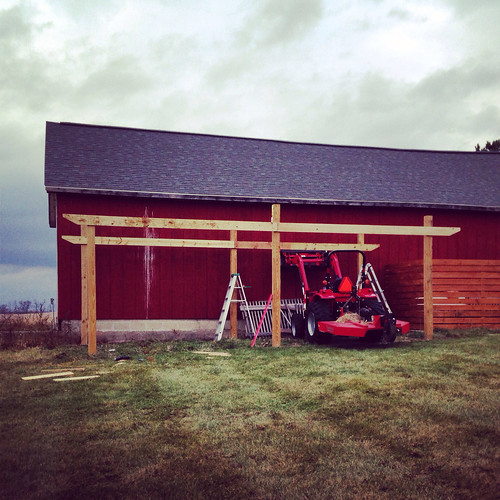 That is going to be a bigass pergola. I didn’t quite realize how big until the crossbeams were up, but ho-ly shit. There’s 450 square feet of space under there… that’s more than the garage I lived in (with a whole other human and two cats) for a year in a half. And it’s going to be a lot of building come spring.

Being a one-woman building crew isn’t right for everyone… it takes more time, ingenuity, and swearing than if you had another set of hands around. But I’ll tell you, knowing I can successfully build something like this on my own is also a powerful, powerful thing.  And it will make all the beers I plan to drink under it next summer taste that much better.

PrevPreviousShit I Should Have Done Sooner: Bedroom Update
NextLife With BirdsNext