Just to paint a picture of my morning this morning: The day actually started at 2AM when my cat decided to use my face as a springboard to catch a moth that was fluttering near the bed. Because, cats.

The resulting adrenaline rush kept me up for a few hours, and by the time I drifted off it was already time to get up for morning chores. So I squint one of my eyes open, stumble downstairs, toss on the bare minimum amount of clothing and head out to the barn with the intention of returning back to my bed as soon as possible.

Seven steps from the porch I step down on something and hear a crunch. I’m 48% asleep and 50% sure I just stepped on an unsuspecting frog and crushed it, and I don’t want to look but I have to, so I pick my boot up and I can tell you the remaining 2% of my brain did not expect to see the back-half of a mouse stuck to the bottom of my foot. And yet, there it was.

I’m… bewildered. I’m also not wearing pants, which becomes important about 3 minutes later, when, after I feed the chickens and let them out of the coop I hear the sound of the female guinea from somewhere by the front of my property.

I should back up here a second and mention that the female guinea went missing again a few weeks ago. Unlike the last time she went missing (and was sitting on a nest in the wood pile) I hadn’t seen her at all, nor had I heard her (which is how I found her last time.) I wasn’t sure if something actually got her this time, or if she’d made another nest somewhere out in the grass… and I was particularly worried she might be in a nest out in one of the fields because for the last week I’ve been mowing down all of the field-grass on my property. 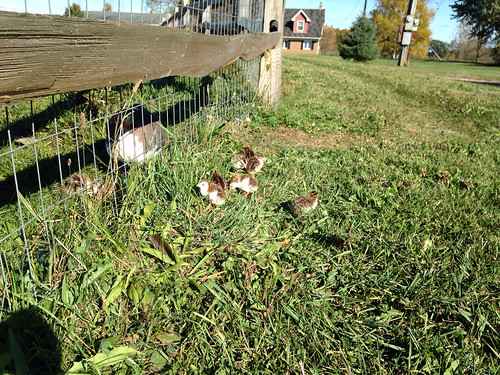 WHAT IS EVEN HAPPENING RIGHT NOW?!

I look over and see at least a dozen baby keets chirping in the grass.

I don’t know if I can really describe the dichotomy of thought between “Holy shit, those are baby guineas, I should go get a closer look!” and “Holy shit, I’m not wearing pants, I should go back to the house… and put on pants!”

By the time I got back out to the “nest”, mama guinea had taken the babies back in to her grass cave… 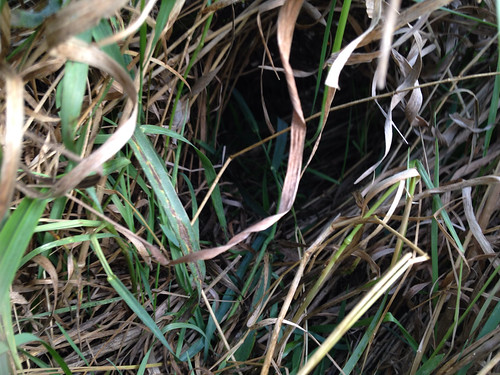 All except one little guy who was on his back, tangled up in the grass (and, since it was only 38-degrees out, deathly cold.)

So, inside the span of about 10 minutes I went from “exhausted and can’t wait to crawl back into bed” to “there’s one baby guinea currently under a heat lamp in my bathroom and a dozen more out in my yard somewhere.”

Farm life is many things, but it’s never boring.

From what I can tell, these keets are a day old, if that. By the time the little one was warm and perked up, mama had brought all of the the babies up to the barn… 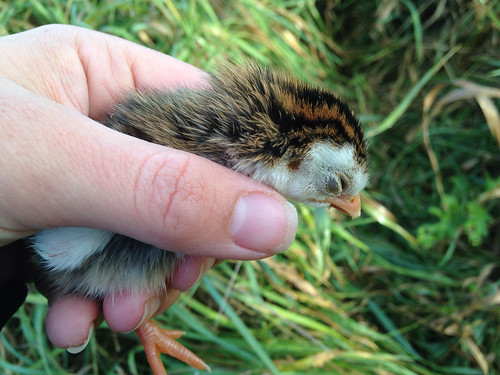 Which was a good 50 yards away from the nest (and through at least one fence.) 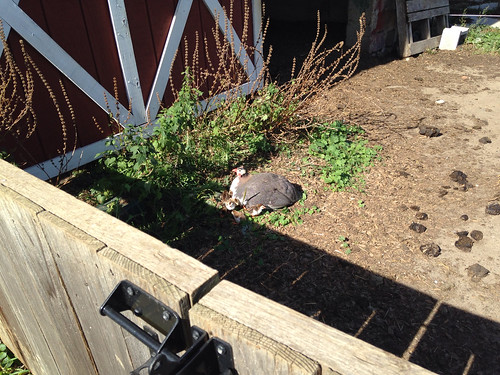 That’s 14 babies (including the little one, who rejoined the flock, no problem.)

First of all, has anyone ever heard the sound that two guineas make? It’s a lot. I’m not sure that I want fourteen more on this property…. 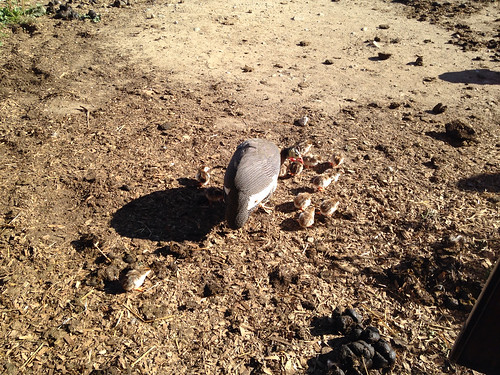 I was basically in shock for the first part of the morning, because if there’s one thing that’s more surprising than a cat jumping on your face at 2 AM, or finding half of a mouse stuck to your shoe first thing in the morning, it’s having fourteen new unexpected babies on the farm.

I had no idea how this was going to go… the chickens will kill and eat other birds. Mama was keeping her babies right next to the donkeys water bucket where they could easily be stepped on. I didn’t want to set food out for them because it would draw the chickens would definitely would peck the shit out of the babies if they wanted their food. So I just… watched. 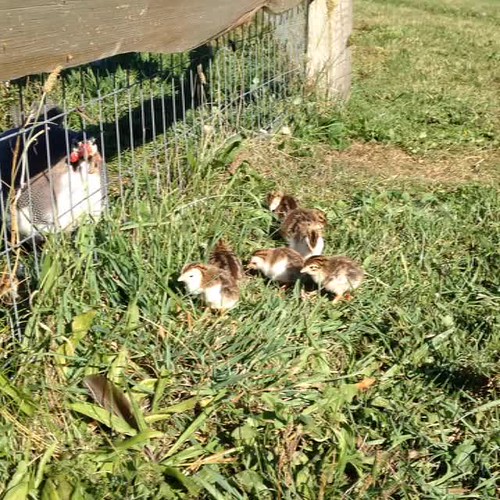 And let mama do her thing.

I’ve heard that guineas aren’t great at “mothering” which is why lots of people will use chickens to hatch and raise guinea keets, but my girl seems to be doing okay. I mean, she steps on them a lot… but other than that…

She’s definitely “teaching” them to eat. I haven’t seen her lead them to water yet, but she did take them all out of the barn and nested down in some grass in the evening before the chickens came in for the day. (In face, I only saw one chicken walk into the barn when the babies were in there, and she actually stopped, got a look on her face that clearly said “WTF” and then hightailed it back out.)

It’s late in the season to have new chicks, but mom is keeping them warm and I’ll set up a heat-lamp in the barn just-in-case. And I guess we’ll go from there…

Every day is an adventure, that’s for sure.

PrevPreviousThe Most Exciting Thing That’s Ever Happened While I Had a Fever
NextAdventures in Beekeeping: Wax RenderingNext