It doesn’t feel like I’ve been sharing a lot of good news on the blog recently, so– spoiler alert– my two most recent farm stories actually have happy endings. I mean, if you don’t count that part where I may or may not have accidentally put a staple in one of my fingers, but, ah, I’m getting ahead of myself and that’s a story for a different post. Today let’s talk about chickens.

So, obviously things haven’t been going swimmingly on the farm for the last month or so. Some of that is because I’ve made mistakes, some of it is bad timing or bad weather or just plain bad luck, and some is because things at my day job have picked up recently which means I’m dedicating more brain space to work and less to things I need to be doing on the farm on the weekends (plus, holidays) which means I feel perpetually behind and unprepared.

Even with all of that going on though, there’s a certain rhythm to life on the farm… I know at a certain time (just before dark) the chickens will be back in their coop, the donkeys will expect to be fed, the lights need to be turned on, the heaters plugged in. I know where to find the guineas at different times of the day, or when the cat expects to be let out, and for the most part the routine of farm life fits around the routine of the rest of my life– the commute, the day job, the workouts, the general things that need to be done to keep me in working order, so that the farm can be kept in working order.

And then there are days when it all just falls apart…

This time of year I may get back to the farm well after dark, but the chickens are usually already back in the coop– which is fairly secure inside the barn–so, while I never leave the coop open over night, I also don’t stress if I know I’ll be getting home late from work… I just close up the coop when I get back (any time between 6:30 and 8:30) and call it a night. Except two weeks ago when, around 7:30 PM, I received a call from my neighbor telling me one of my chickens was in his garage.

This is weird for so many reasons. 1.) This is WAY past the time for the chickens to be back on their roosts in the coop (like they have been every other night for the last 3 years, including the one time there was a raccoon in there with them), 2.) The chickens do occasionally get in the road, but they never go far enough onto my neighbors property to get to their house, and 3.) The neighbors huge dogs have pens in their garage… the dogs frequent the farm and would never hurt the Nugs but still, of all the places to voluntarily go… none of this made sense.

So my neighbor brings one loudly protesting chicken back over to my barn (best neighbors ever, seriously) and I realize yet another chicken is missing from the coop. The rest of the chickens look like this…. 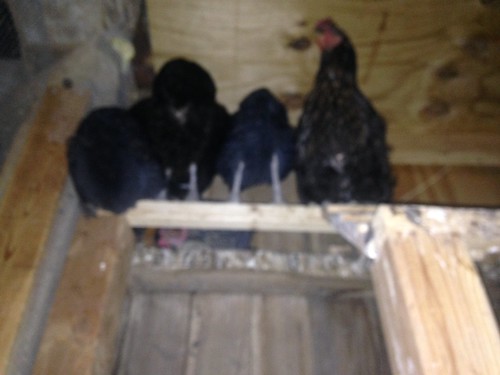 This is NOT GOOD. Not just because its a blurry pic, but because that’s a “we’re terrified” chicken formation if I’ve ever seen one– all scrunched together, butts facing forward, heads hiding somewhere where obviously if we can’t see their faces they can’t see us. Because chickens.

My conclusion was that something got in the coop, got one of the chickens, scared the crap out of the rest of them, and one of the remaining Nugs made a break for it and decided, out of all the places she could hide on my actual property (where the chickens hang out ALL DAY), that the neighbors garage with the big dogs was going to be the safest place to go.

I love my chickens but, ugh, the logic.

Still, I spent several hours outside with all the flashlights I own trying to find that chicken (or even evidence that something bad had happened to her) but there was nothing. No blood, no piles of feathers, nothing. Until… 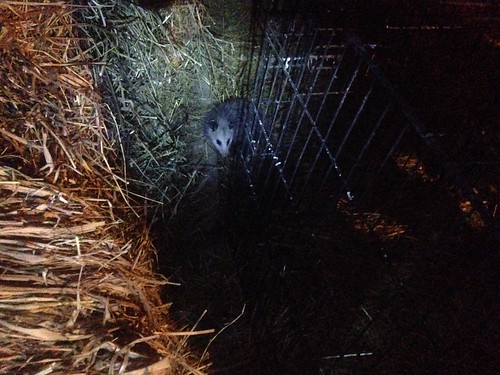 Yeah. I heard the chickens making noise in their coop, ran back to the barn, and found this little guy just hanging out by the chicken food.

The thing is, this is a tiny possum. Opossum? Whatever.  I mean it’s not that tiny possums can’t kill chickens, but it’s literally a third of the size of any of my birds… if it killed one and dragged it off somewhere to feast, why would it be desperately trying to get into the bin where I keep the chicken feed?

I went through all the mental exercises about whether or not the missing chicken could still be alive and where she might be. Still, it seemed like the worst case scenario had been coming true on the farm recently, so I finally went to bed after midnight with a heavy heart, sure that I was going to be missing that chicken for good.

And then, the next morning I jumped out of bed as soon as I woke up, ran out to the barn, and what should I see hanging out just outside the coop?? 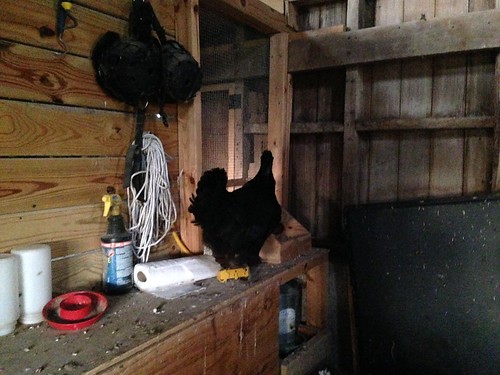 THE MISSING CHICKEN! Strutting around indignantly because she’d been shut out of the coop and wanted to get back in so she could lay an egg.

There have not been many times in my life where I thought I might collapse on the floor of a shit-covered barn in relief, but that was one of them.

Although the other thing I found that day was this… 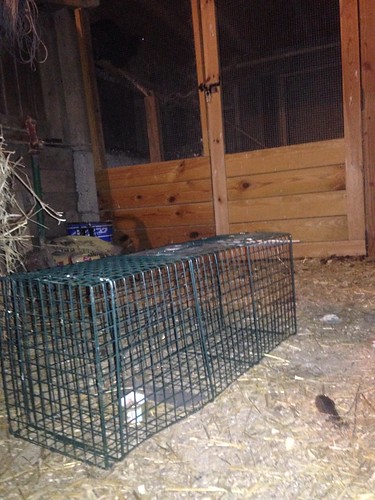 I’ve set the damn thing every night for the last two weeks with different bait, and I’ve yet to catch Tiny Possum.

We have, however, settled into a new routine around here. If I’m home and have the coop closed up before 6 PM everything is fine, but, on the two occasions I haven’t managed to get home before 7 this same chicken has been missing from the coop, which then requires me to spend a fair amount of time outside searching for her with a flashlight.  But– good news– I’ve become something of an expert chicken-finder recently, and each time I’ve managed to find and catch the missing Nug and get her back in the coop before I go to bed.

Seriously. There’s no end to the adventures on the farm, but at least this one has a happy ending. (It’s been two weeks and none of my baits have worked for the possum in the live trap, but I expect I’ll get the little guy eventually.)

PrevPreviousAdventures In Beekeeping: The Worst Mistake I’ve Ever Made
NextThe Last HiveNext