I Saw That Going Different In My Head: The New Chicken Edition

One of the things on my list for 2017 was adding a few more chickens to my flock. In my head I pictured that happening like it has in previous years: coming home from Tractor Supply one day in early March with a box full of little nuggets that would live in the house for a few weeks and drive me crazy before moving out to the barn… 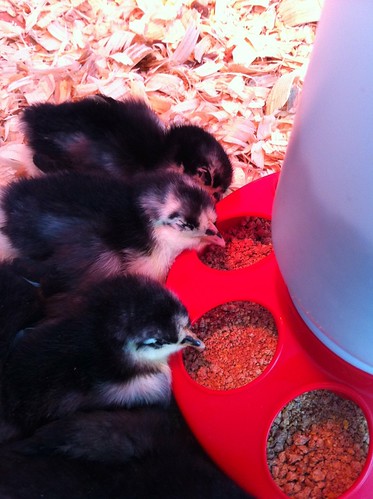 Has anything around here even once gone the way I saw it happening in my head?

Here’s how doubling the size of my flock actually happened: I was running around my house in my pajamas last weekend with a tape measure in one hand, beer in the other, muttering to myself like crazy person I am, when a neighbor kid shows up unexpectedly at my door and offers me his chickens.

What? That doesn’t ever happen to you?

Apparently he had seven Rhode Island Red hens that he couldn’t take care of anymore and wondered if I wanted them (which, obv, I’m not a crazy chicken lady for nothing you know) and, before I knew it, seven bewildered (and full-grown) ginger nugs showed up at the farm in a tiny little dog crate.

There is never a dull moment around here.

Especially because integrating new chickens into an existing flock can be a risky affair. The “pecking order” is a very real thing with chickens, and involves the kind of pecking that can leave an unfortunate nug bleeding and missing most of the skin from her head. (For real, I read this post five years ago over at the old Bonafide Farm website and it’s been seared into my memory ever since. Warning: it’s graphic.)

Chickens aren’t always so bloodthirsty, though. In a stable flock with a well-established hierarchy– the pecking order really just plays out with a few sharp reminder pecks delivered from one bird to another around the food bowl and when settling in to roost at night just so everyone knows their place. When you add new chickens into a flock, however, that hierarchy is thrown out of whack, and if you don’t integrate new chickens properly, well, all kinds of bad/bloody things can happen.

So adding seven new full-grown chickens to my existing flock of six was a prospect that came with no small amount of stress, and that stress brought on a lot of “creative” (i.e. completely insane) ideas about how to integrate the flocks with my one coop. They ranged from hiring someone to build a second coop in a day, to buying a cheap camping tent and converting it into a temporary coop for a while. (I mean, they say no idea is a bad idea, but, in retrospect, I think a small flock of determined chickens could reduce a tent to ribbons inside of day, so that one probably wasn’t my best.)

In the end I did the smartest thing a girl can do at times like this: called for reinforcements. My mom and grandma showed up bright and early the day the new nugs were to arrive. And in the end what I decided to do was simple… 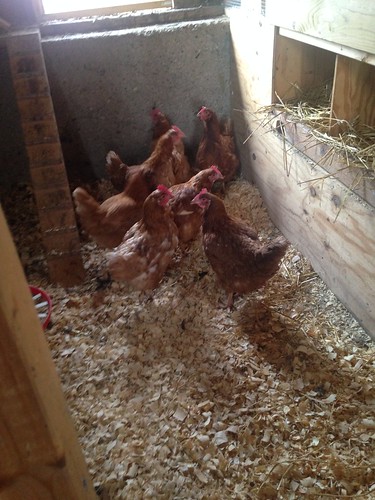 After the original chickens  went out free-ranging for the day I put the new nugs in the coop and shut the door. (That means my existing flock couldn’t get back in to the nesting boxes for a day but, as I explained to them when they got indignant about this, we all have to do our part around here.) Mostly the new chickens stayed huddled together in a corner, but periodically throughout the day I’d open the door and let both flocks “see” each other. 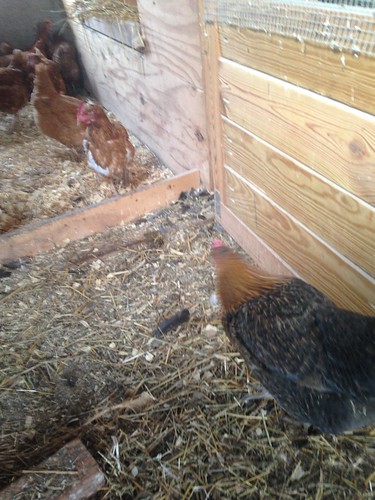 There were a few skirmishes–a couple of feathers sacrificed to the cause– but overall both flocks seemed more wary of each other than outright aggressive.

The new chickens had never free-ranged before so I was a bit nervous about whether or not they’d make a break for it (or just wander out of the barn and not know how to get back) but all of that worrying was for naught, as it took a full 24 hours for them to consider leaving the coop, even when the door was left open all day. 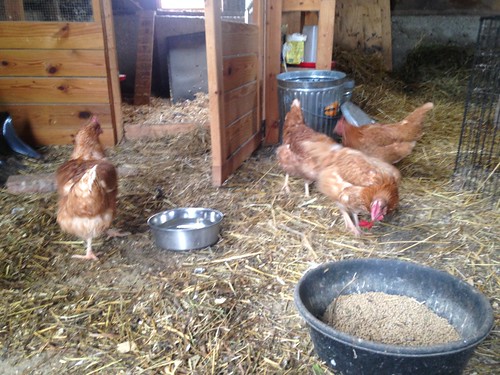 Later that day I almost fell over in shock when I found them outside digging under the pine trees. 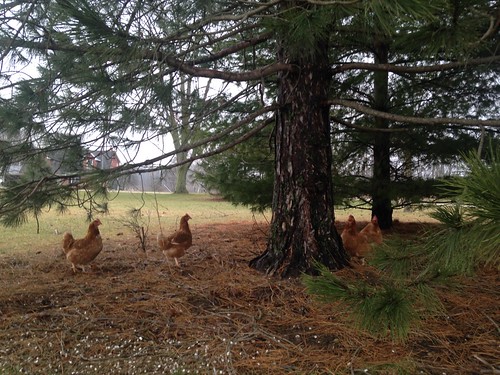 Those chickens spent a solid four hours just gleefully digging holes out under the trees. And it only took a little goading to get them to go back in at night, although I think that was more because they were having so much fun than because they didn’t know where to go.

Overall, integration has been pretty smooth. The two flocks mostly keep to themselves outside of the coop, and they all go back in together at night (although the original chickens haven’t let any of the new ones up on to the roosts yet… the new nugs sleep piled up in the nesting boxes.) And I’ve been extra careful not to leave them locked in the coop together for any length of time until things are more settled.

The new chickens are still unsure about the donkeys and the guineas. Especially when being serenaded by the latter… 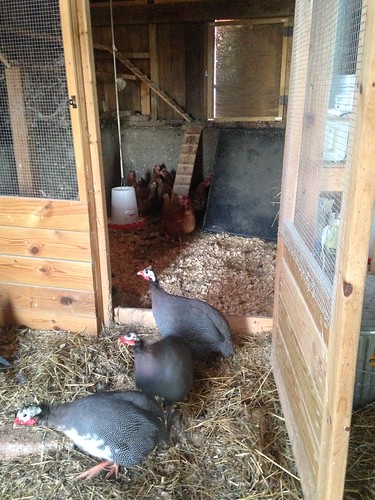 Who wouldn’t be? The sound those birds make is downright unsettling.

But, despite the fact that the new chickens didn’t free-range in the past, in just a few short days they’ve learned to come when I whistle (treats! so many treats!) and I only had one incident where one of them didn’t make it back into the coop at night… 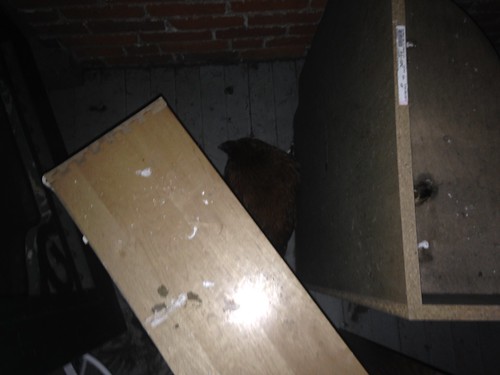 After 45 minutes of searching my entire property in the dark, I finally heard a faint clucking from the front porch and followed the sound to find the missing chicken improbably nestled up between a couple of cabinets that are, uh, “in storage” on my front porch.

It’s fair to say it hasn’t been the least stressful week I’ve ever had, but I’m happy to give these new nugs a chance at the good life on the farm. 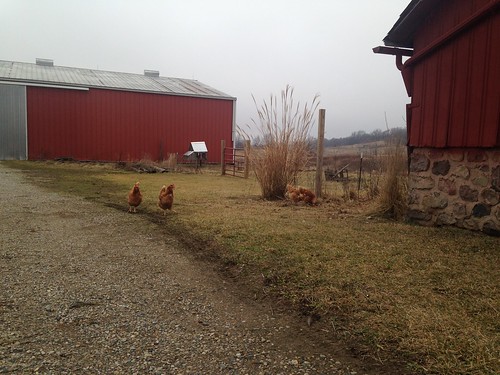