Putting Up a Fight 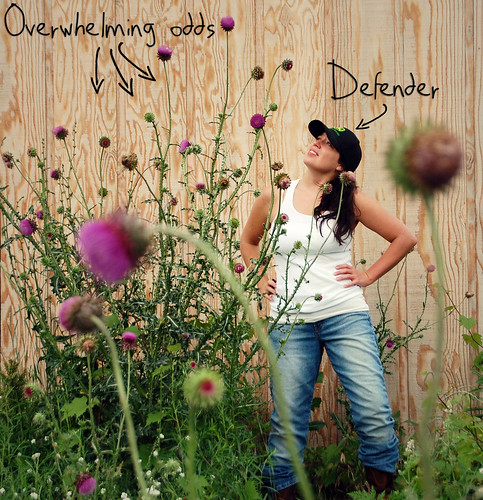 These kind of weeds.

I was just not aware that this was a thing that could happen. Inside of three weeks. In the middle of your driveway.

I grew up on some property, so big yards aren’t a new thing to me, but my family always kept it so well maintained that I never saw a blade of grass over six inches. My first house in the city had a postage-stamp sized lawn that was fully shaded, which means I had to cut the grass with a little reel mower two or three times per year, if that.

Then, when I moved out to the Memorial house, 1.) The property was a construction zone for the better part of the first year I lived there, so mostly it looked like this. And 2.) I was living with a guy who I think used the lawn mower as an escape from the fact that I was probably starting a new project somewhere in the house that he would have to finish. (Which was very likely true.) As a result, uh, we had a really well maintained yard.

It occurs to me now that I never actually witnessed a “lawn” get out of control before I bought the Liberty House, so I was kind of la-ti-da about moving on to 6 acres of property in the springtime. I didn’t even own a lawn-mower with an actual motor. (Which, in retrospect? That was a *facepalm* moment if I’ve ever had one.)

So those first couple of months were rough. And I’m not the same clueless 23-year-old who bought her first house a decade ago, but even so, I remember a Saturday just two years ago when my grandparents came up to see the new house, took one look around, and the next thing I know my grandpa is mowing down the jungle lawn around the house and my grandmother is unpacking all of the boxes in my kitchen, and I just stood around dumbfounded, thinking, these people are just so much better at life than me.

That still makes me laugh every time I get on my tractor.

I’ve learned a lot of lessons in the last two years, but I still have a hard time not letting parts of the yard get out of control. Like, for example, this part…

What happened here was that sometime in the last two years I stacked some wood next to the garage with the intent of using it on my bonfire. But I must have let it sit for more than two weeks and the wood pile quickly became both covered with weeds, and un-mowable. 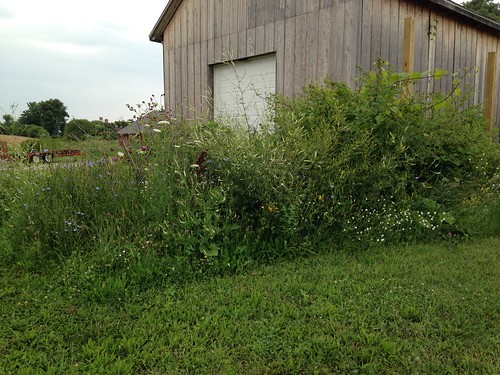 Then I noticed something strange inside my workshop… 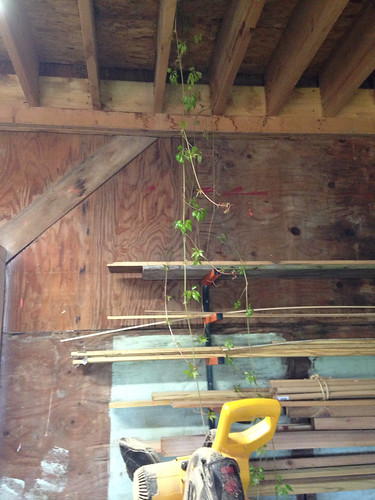 Why yes, those are jungle vines growing mysteriously out of the rafters inside. Inside my workshop. Basically, no place on the farm is safe from this shit.

The problem is, unlike the dirty dishes that only seem to multiply like rabbits when I leave them unattended in the sink for a while, this problem actually gets worse the longer you ignore it. So, on Saturday I decided that this was the thing I was going to get done this weekend. I was going to reclaim my land from the jungle. And then I did what any reasonable person would do before heading into this kind of battle… 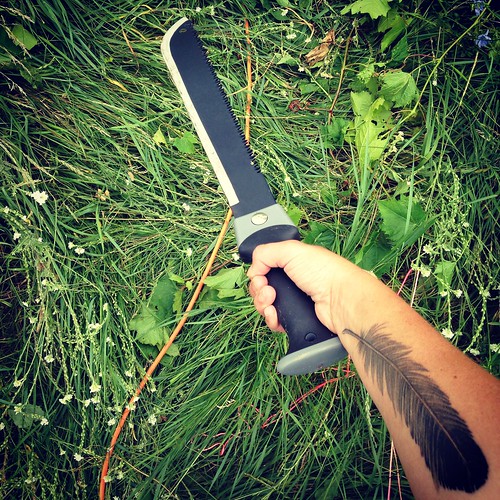 Drank a beer and grabbed my machete. (And also called my mom to come up with her tree pruners.) 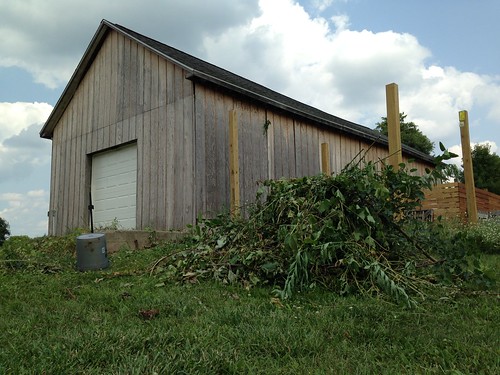 This wasn’t just a large patch of weeds that I could knock down with the brush hog. This was weeds, growing around two wood piles, covered in some kind of wild grape vine, on top of what I later found out was a nest of carpenter bees.

Side note: Carpenter bees do not actually sting, but you know what they will do? Headbutt you. That happened to me this weekend. I got headbutted by an angry bee.

There were hours upon hours of ripping out, chopping down, and hauling away greenery. Like 15 foot long vines… 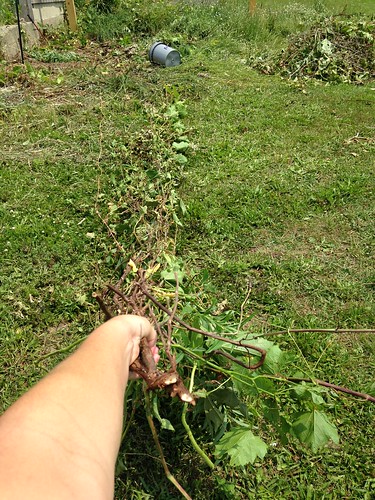 After all of that, I was able to move the wood (and burn it.) 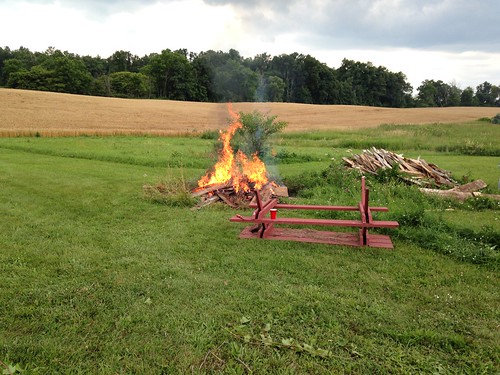 Then I could get the brush hog in there. 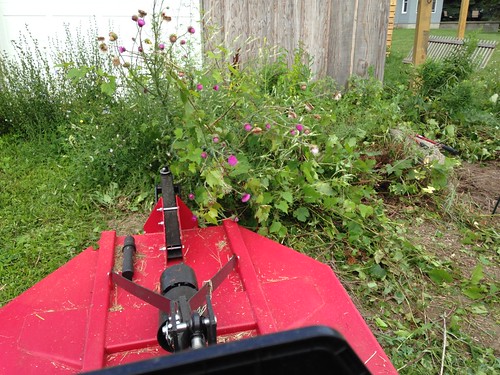 Then, finally, I was able to weed whack. 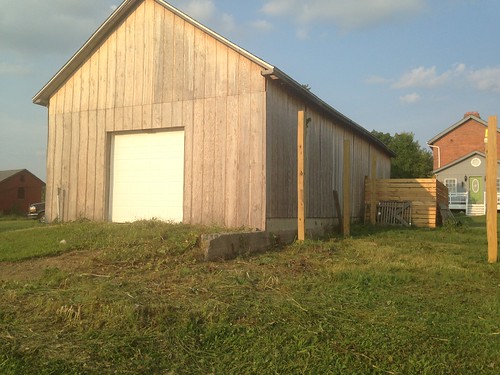 I mean, holy shit, those weeds put up a fight. But since I made it this far, I decided to tackle a couple of other trouble spots as well. Like this one at the front of (still horribly ugly) garage as well… 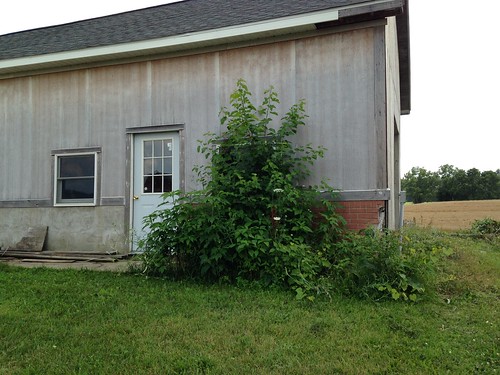 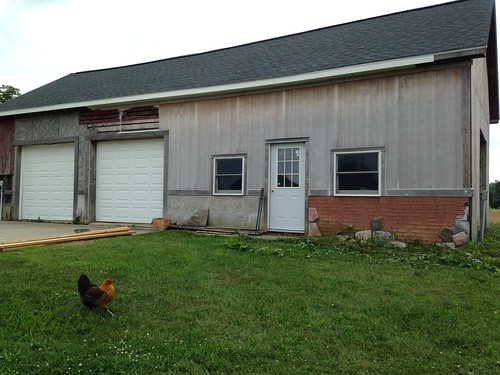 Those Nugs are always trying to take credit for my hard work.

And hard work it was, but sometimes in life you just need to wield a machete and chop some shit down like a badass. That was my primary motivation for this project, but, also, I’ve got plans to work on my pergola and paint some of that siding in the near future.