I have to say that 2015 was filled with all kinds of awesome, but one of my very favorite things about last year was the bees… 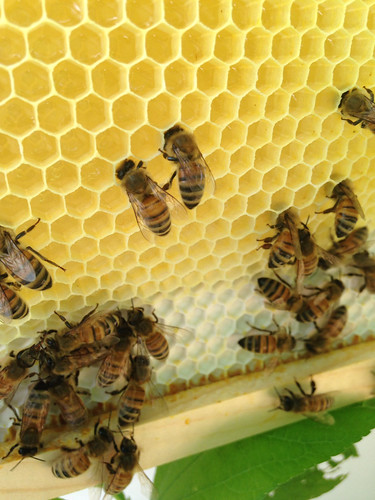 My last update on the hives was back in November and I honestly thought that would be the last thing I’d have to say about the bees until sometime in spring when the temps are above 50-degrees and I could open the hives up and see how they fared through the winter.

I mentioned this in my last post, but just as a refresher: In winter all of the worker bees will cluster around the queen and “vibrate” to generate heat and keep her warm. I’ve read some studies that say the ambient temp in hive may be around 30 degrees, but in the center of the cluster it’s above 60, which is pretty remarkable for a bunch of little insects huddled together in winter.

Anyway, you really can’t open the hives when the temps are below 50 so, for the most part, it’s wait-and-see until spring.

Well, except that I’m subscribed to the newsletter of my local beekeeping club (yep, that’s a thing) and they just happened to mention in one of the recent emails that some enterprising young beekeepers had started using thermal imaging cameras to check up on their hives in winter.

Now, let me tell you something that almost never happens…

I don’t run this website like a business. I’m really just interested in telling stories, and very occasionally if something sparks my interest I’ll review a product or do a sponsored post, but I probably get 30 emails every week “pitching” some kind of product or service, and I only actually review or talk about, what? 5 a year? Maybe.

So last March some guy named Kit (seriously, that’s not a joke) reached out to see if I wanted to check out a thermal camera for my iPhone from Seek. Then there was a whole series of emails that followed in which I felt like I was talking to myself–which was fucking weird–and in the end I told him to send me one of their cameras just because I thought it was cool and wanted to check it out, and maybe I’d find something to write about it.

So they sent me a camera and I checked it out… The problem is that from a DIY perspective these thermal cameras are billed as being good for things like checking a house for heat loss. (Hahaha… I live in a 150 year old farm house with original windows. Listen, I don’t need a fancy camera to tell me where the heat is going, and I don’t care because these windows are amazing.) The thing that intrigued me was that you could also potentially use them to find clogs in drains (just run hot water through them) etc. Or, you know, scout your property for intruders during the zombie apocalypse. Whatevs.

However, I don’t just create artificial problems to “solve” because someone sent me a product they want me to review… I don’t have any burning questions about heat loss in my house, I don’t currently have any clogged drains, and as far as I know Trump hasn’t been elected, so it’s not the End of Times… yet. So I think I posted a couple of funny thermal images of the chickens to Instagram, and that’s as useful as I found the thermal camera at the time. I told the company I didn’t have a real use for the camera right now, but I’d let them know if something came up, and then… I forgot about it. For, like, a year? Close to a year.

The thing that never happens is that I read a newsletter about how people are using thermal cameras to check on their bees and then HOLY SHIT I HAVE A THERMAL CAMERA SOMEONE SENT ME A THAT IS PROBABLY LOST SOMEWHERE IN MY HOUSE RIGHT NOW. 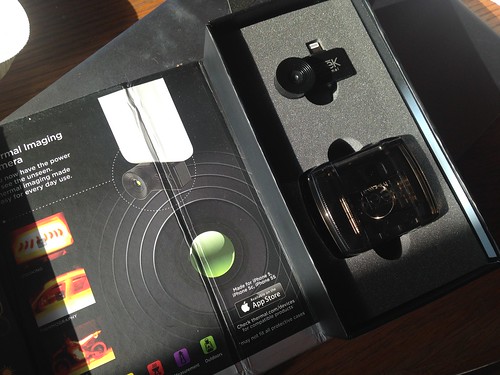 That was a really long story to get to this… 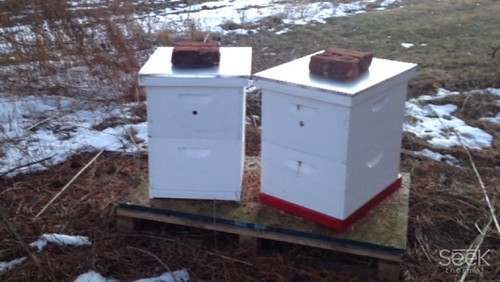 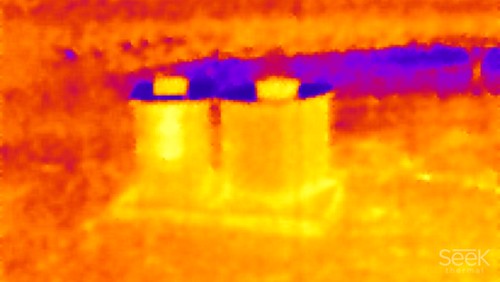 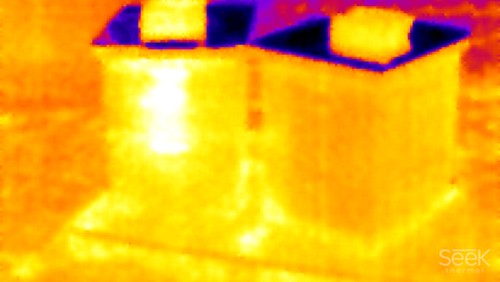 The camera hooks into your phone, and uses the Seek Thermal app. The app has several settings and one of them lets you set a temperature and it only “colors” anything over that temp. So I set the app to show me anything that was warmer than 35 degrees… 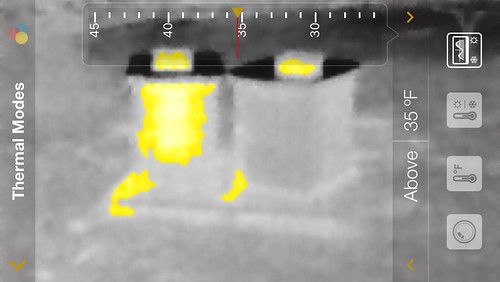 If you’re reading these the way I did, it means that I do have one healthy hive this winter, and one…

Well. Not so much.

The hive on the right in these images is the one that swarmed in early summer, and I noticed at harvest time had a lot less activity and fewer bees. They were still alive in November when I drilled some ventilation holes in the hives, but I don’t think they made it through the winter. (Also, at one point in late November the outer cover blew off the hive on a really windy night… it was still above 40 out, but that may have been the death sentence for that hive.)

There’s still a very small possibility that the cluster is just very small and on the side of the hive I can’t image with my camera, but…that’s probably wishful thinking.

And it’s such a bummer. This has been a very mild winter, and I was hoping both hives would make it.

So. I guess that’s good news and bad news for the winter. One of the hives seems to be doing really well, I’ve learned a lot about swarming and strong hives and prepping the bees for winter…I hate that my mistakes might have caused the loss of a hive, but I’m determined to learn from it and do better next year.

Here’s to spring, and bringing at least a few new bees to the farm in 2016!

So technically this isn’t a sponsored post. Seek didn’t pay me to write this (in fact, I’m not sure they even know their thermal camera is good for beekeepers… they definitely wasn’t advertised when they sent it to me.) However, they did send me this camera for free a year ago…but then I’m pretty sure they asked me to send it back to them when I said I didn’t have anything to write about it, and apparently they didn’t realize they were talking to a girl who has had a Netflix envelope with a DVD in it sitting on her counter waiting to be taken out to the mailbox for three months. Yeah that’s where I’m at in life. So basically I stole this thing? And now I’m admitting it and writing a post about it? Yeah. I don’t know wtf just happened here, but, uh, Seek, if you guys want your camera back, maybe email me? In any event, the bees and I are really grateful we had this thing a year later. Everyone else, if you want to know more about this camera check it out here.