If all of the sink drama occurring two weeks ago wasn’t enough, in the middle of all of that (and a week after I expected them) my two new packages of bees came in. 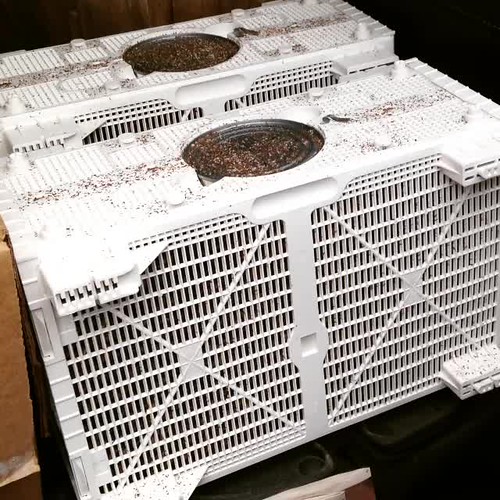 By “came in” I mean “arrived at a farm 60 miles north of mine where I then had to pick them up and then spend an hour in the car with 30,000 back-seat drivers.”

Just a quick little recap on my bee adventures last year and over the winter… in May of 2015 I got 2 packages of bees like this and set up 2 brand new hives. (Uh, and also got stung in the jugular. That was fun.)

From those hives I got 20+ squares of cut-comb honey… 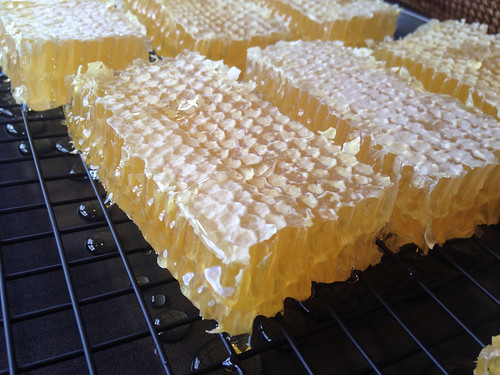 And three gallons of jarred honey… 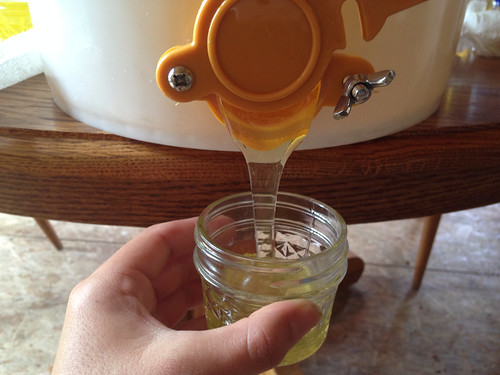 Of which I used a half-gallon to make mead… 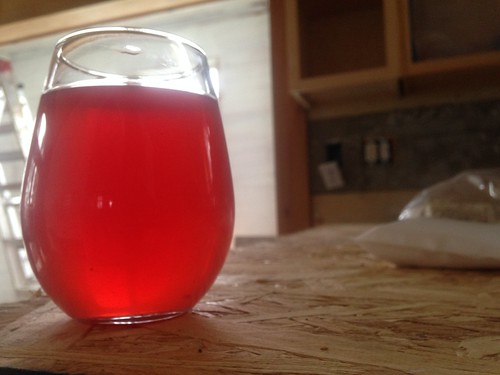 And I also got to spend a year being utterly fascinated by bees.

Then, over the winter I lost one of my hives.

So I had one hive left, and decided to add two new hives the traditional way this year. (I’m also hoping to either split one OR catch a swarm this year to replace the hive I lost over the winter, but that’s a story for another time.)

Here are a few things I (try to) keep in mind when it comes to installing new packages of bees:

So, okay, the bees showed up late, which means they showed up during the one week a year everybody in my company gets together for two days for our big, annual all-company meeting. Since that meant I would barely be at the farm for 48-ish hours, the timing for getting the bees into the hives became critical. 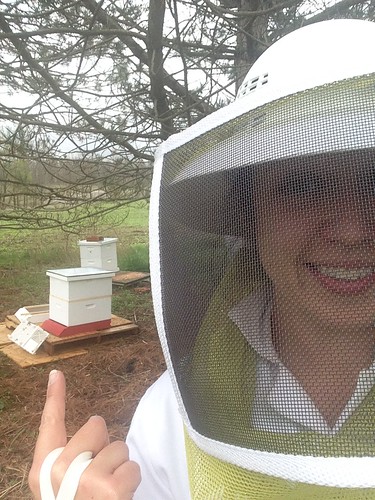 I learned a lot from last year’s mistakes. Mostly that I should spray the bees with a little sugar water, shake as many into the hive as possible (instead of worrying about getting every single bee in there), and, of course, make sure the queen cage is properly set (with a mini marshmallow in the entrance so they can “release” her). 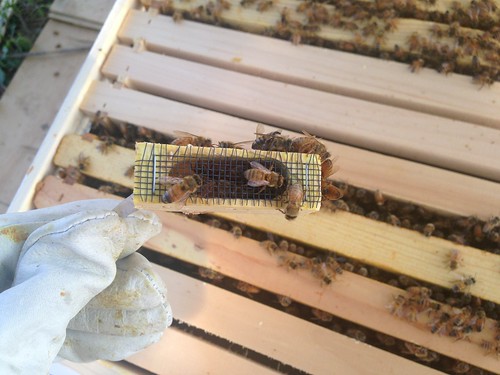 That’s what a queen cage looks like (but she’s already out of it in that pic, I was just removing it from the hive.) She’s kept separate from the rest of the bees initially so they don’t kill her, since the queen and all the workers in a package are from different hives. However, some time spent in close proximity and the fact that they release her from the cage by eating the marshmallow covering the opening make them more accepting of the new queen. So far–fingers crossed–I haven’t had any issue with that, but in another week I’ll check the hives for “evidence of the queen” (i.e. larvae in the brood cells) just to make sure we’re good.

So here’s why my story takes a not-so-great turn. What worked really well for Hive 1– getting most of the bees in the hive, and letting the rest find their way in later– was actually disastrous for Hive 2.

I did the same thing with them Tuesday night– got most of them in the hive, and left the rest out in the box next to the entrance to find their way in later. Now, with the first hive I put in, even though it was later in the evening, it was a warm night and in the morning any bees that hadn’t made their way into the hive got warmed up by the morning sun, started flying around, and eventually made their way in to the new queen.

What I didn’t realize with the second hive– and this was a rookie mistake– was that Wednesday was going to be significantly colder and they where predicting “showers” all day, which actually meant “downpours.” So I put most of the bees in Tuesday night and figured the rest would go in Wednesday morning. Except I didn’t check them until about 2 minutes before I had to leave my house for that big work meeting, and I noticed a fairly sizable cluster of bees still in the box.

I briefly considered putting my bee suit on and shaking them into the hive (which, let’s be honest, is 30 minutes minimum) but I looked quickly at the forecast and decided if I could leave my meeting early and get home before the sun went down, I could get them into the hive before dark.

So, I did get to work on time–which is a fairly important thing if you want to be a responsible adult who can make her tractor payments every month– but as far as the bees went, that was a bad call. By the time I got home… 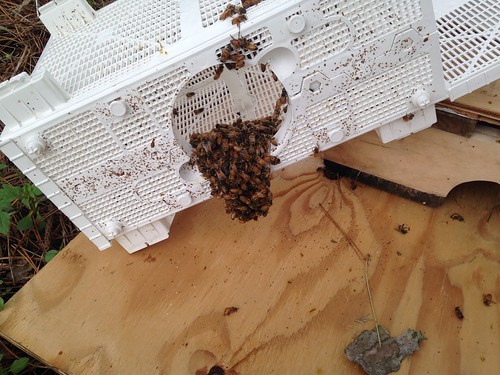 That’s a cluster of dead bees.

I hate looking at that picture, and I can’t even express how horrible I felt about the fact that it happened. If I had just been a little more planful, or checked my hives a half hour earlier that morning, or had a better understanding of the weather that week… well. There are always a lot of what-ifs when you feel like you’ve seriously effed up. Which I did.

This is the hardest part about being the sole caretaker of a farm… sometimes you mess up, and then you have to make decisions about your priorities. That day work took precedence and I’m not mad about that, I love my job. The company I work for and the people I work deserve my attention (and timely attendance) despite things that are happening on the farm, and, honestly, I’m so lucky that on almost every day of the year I don’t have to make those decisions because I can flex my work schedule when I need to.

It just so happens that on this day I was overconfident, didn’t plan as well as I should have, and there were consequences. I feel like shit about it (I was a wreck for a solid two days after that, but I only cried about it in my car where no one had to witness that shit because, listen, we’re all allowed a little breakdown now and again, but by god my coworkers don’t need to see me ugly-cry over bees) and, by the good graces of the universe, Hive 2 survived a few cold days and seems to be doing well two weeks later. 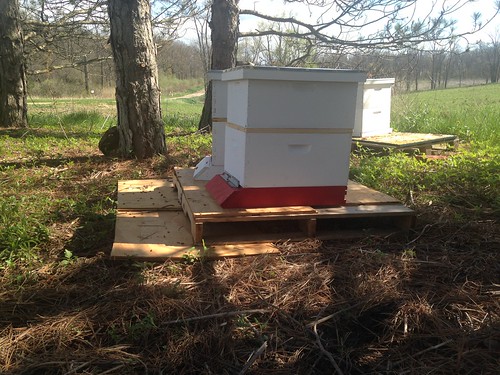 I’ll be keeping an eye on it though.

Next up will be adding new frames to the second boxes of these hives and adding more space to my Year 1 Hive. And, while that didn’t go exactly as planned, I’m still super excited and grateful to have more bees on the farm this year. Laying under the blossoming trees and hearing the bees collecting pollen has been one of my greatest joys this spring… 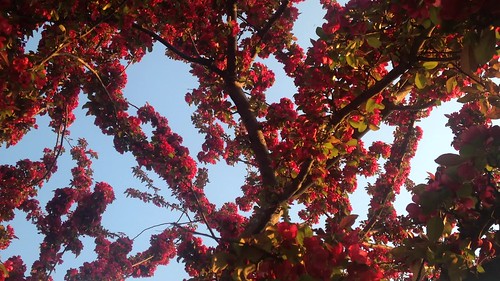 (If you look closely, you’ll see them!)